The Ordnance Survey (OS) devised the national grid reference system, and it is heavily used in their survey data, and in maps (whether published by the Ordnance Survey or commercial map producers) based on those surveys. Grid references are also commonly quoted in other publications and data sources, such as guide books or government planning documents.

A number of different systems exist that can provide grid references for locations within the British Isles: this article describes the system created solely for Great Britain and its outlying islands (including the Isle of Man); the Irish grid reference system is a similar system created by the Ordnance Survey of Ireland for the island of Ireland. The Universal Transverse Mercator coordinate system (UTM) is used to provide grid references for world-wide locations and this is the system commonly used for the Channel Islands. European-wide agencies also use UTM when mapping locations, or may use the military grid reference system (MGRS) system, or variants thereof. 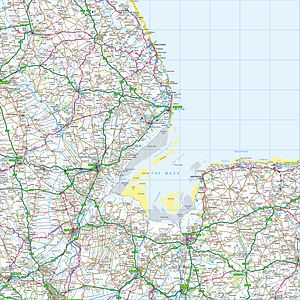 Grid square TF. The map shows The Wash and the North Sea, as well as places within the counties of Lincolnshire, Cambridgeshire and Norfolk.

The grid is based on the OSGB36 datum (Ordnance Survey Great Britain 1936, based on the Airy 1830 ellipsoid), and was introduced after the retriangulation of 1936–1962.

The Airy ellipsoid is a regional best fit for Britain; more modern mapping tends to use the GRS80 ellipsoid used by the GPS (the Airy ellipsoid assumes the Earth to be about 1 km smaller in diameter than the GRS80 ellipsoid, and to be slightly less flattened). The maps adopt a Transverse Mercator projection with an origin (the "true" origin) at 49° N, 2° W (an offshore point in the English Channel which lies between the island of Jersey and the French port of St. Malo).[1] Over the Airy ellipsoid a straight line grid, the National Grid, is placed with a new false origin (to eliminate negative numbers), creating a 700 km by 1300 km grid. This false origin is located south-west of the Isles of Scilly. The distortion created between the OS grid and the projection is countered by a scale factor in the longitude to create two lines of longitude with zero distortion rather than one. Grid north and true north are only aligned on the 400 km easting of the grid which is 2° W (OSGB36) and approx. 2° 0′ 5″ W (WGS 84).

OSGB 36 was also used by Admiralty nautical charts until 2000[citation needed] after which WGS 84 has been used.

A geodetic transformation between OSGB 36 and other terrestrial reference systems (like ITRF2000, ETRS89, or WGS 84) can become quite tedious if attempted manually. The most common transformation is called the Helmert datum transformation, which results in a typical 7 m error from true. The definitive transformation from ETRS89 that is published by the OSGB is called the National Grid Transformation OSTN02.[2] This models the detailed distortions in the 1936–1962 retriangulation, and achieves backwards compatibility in grid coordinates to sub-metre accuracy.

Datum shift between OSGB 36 and WGS 84

The difference between the coordinates on different datums varies from place to place. The longitude and latitude positions on OSGB 36 are the same as for WGS 84 at a point in the Atlantic Ocean well to the west of Great Britain. In Cornwall, the WGS 84 longitude lines are about 70 metres east of their OSGB 36 equivalents, this value rising gradually to about 120 m east on the east coast of East Anglia. The WGS 84 latitude lines are about 70 m south of the OSGB 36 lines in South Cornwall, the difference diminishing to zero in the Scottish Borders, and then increasing to about 50 m north on the north coast of Scotland. (If the lines are further east, then the longitude value of any given point is further west. Similarly, if the lines are further south, the values will give the point a more northerly latitude.) The smallest datum shift is on the west coast of Scotland and the greatest in Kent.

But Great Britain has not shrunk by 100+ metres; a point near Land's End now computes to be 27.6 metres closer to a point near Duncansby Head than it did under OSGB36.[3]

Datum shift between OSGB 36 and ED 50 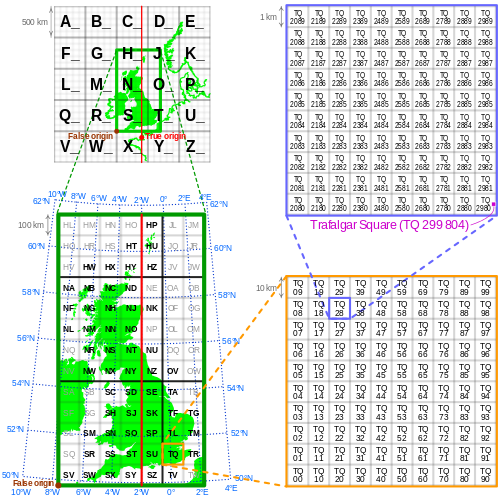 Illustration of the Ordnance Survey National Grid coordinate system, with Trafalgar Square as an example 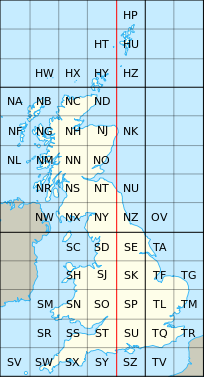 For the first letter, the grid is divided into squares of size 500 km by 500 km, outlined in dark grey on the map to the right. There are four of these which contain significant land area within Great Britain: S, T, N and H. The O square contains a tiny area of North Yorkshire, almost all of which lies below mean high tide.[4]

For the second letter, each 500 km square is subdivided into 25 squares of size 100 km by 100 km, each with a letter code from A to Z (omitting I) starting with A in the north-west corner to Z in the south-east corner. These squares are outlined in light grey on the map, with those containing land lettered. The central (2° W) meridian is shown in red.

It would be possible to extend the grid system over Ireland, completing the S and N squares and introducing what would become the R and M squares (with the arrangement of first letters following the same pattern as for the second letter). However, there is no motion for this at the moment, and the accuracy of the projection would start to diminish in the west of Ireland, more than 8 degrees from the central meridian. Theoretically, the system extends far over the Atlantic Ocean and well into Western Europe with square AA near Iceland and square ZZ in northern Italy. In fact, Rockall is mapped by the Ordnance Survey, but is usually shown as an inset without gridlines on a mainland sheet. However, the grid can be extended to put Rockall in grid square MC as shown in this 1:50,000 mockup.

Within each square, eastings and northings from the origin (south west corner) of the square are given numerically. For example, NH0325 means a 1 km square whose south-west corner is 3 km east and 25 km north from the south-west corner of square NH. A location can be indicated to varying resolutions numerically, usually from two digits in each coordinate (for a 1 km square) through to five (for a 1 m square); in each case the first half of the digits is for the first coordinate and the second half for the other. The most common usage is the six figure grid reference, employing three digits in each coordinate to determine a 100 m square. For example, the grid reference of the 100 m square containing the summit of Ben Nevis is NN 166 712. (Grid references may be written with or without spaces; e.g., also NN166712.) NN has an easting of 200 km and northing of 700 km, so the OSGB36 National Grid location for Ben Nevis is at 216600, 771200.

Grid references may also be quoted as a pair of numbers: eastings then northings in metres, measured from the southwest corner of the SV square. Note that 14 digits may be required for locations in Orkney and further north. For example, the grid reference for Sullom Voe oil terminal in the Shetland Islands may be given as HU396753 or 439668,1175316.

Another, distinct, form of all-numeric grid reference is an abbreviated alphanumeric reference where the letters are simply omitted, e.g. 166712 for the summit of Ben Nevis. Unlike the numeric references described above, this abbreviated grid reference is incomplete; it gives the location relative to an OS 100×100 km square, but does not specify which square. It is often used informally when the context identifies the OS 2-letter square. For example, within the context of a location known to be on OS Landranger sheet 41 (which extends from NN000500 in the south-west to NN400900 in the north-east) the abbreviated grid reference 166712 is equivalent to NN166712. If working with more than one Landranger sheet, this may also be given as 41/166712.

Summary parameters of the coordinate system