Calabar (also referred to as "Canaan City")[1] is a city in Cross River State, south southern Nigeria. The original name for Calabar was Akwa Akpa, from the Efik language.[2][3] The city is adjacent to the Calabar and Great Kwa Rivers and creeks of the Cross River (from its inland delta).

Calabar is the capital of Cross River State. Administratively, the city is divided into Calabar Municipal and Calabar South LGAs. It has an area of 406 square kilometres (157 sq mi) and had a population of 371,022 at the 2006 census.[4] 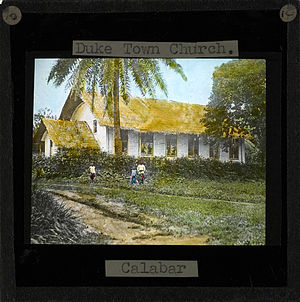 As far back as the 16th century, Calabar had been a recognized international seaport, shipping out goods such as palm oil.[5] During the era of the Atlantic slave trade, it became a major port in the transportation of African slaves. Most slave ships that transported slaves from Calabar were English, with around 85% of these ships being from Bristol and Liverpool merchants.[6] Old Calabar (Duke Town) and Creek Town, 10 miles northeast, were crucial towns in the trade of slaves in that era.[1] The first British warship to sail as far as Duke Town, where she captured seven Spanish and Portuguese slavers, may have been HMS Comus in 1815.[7]

The main ethnic group taken out of Calabar as slaves were the Igbo, from the neighboring Igbo land.[8] African-American writer and slave John Jea was from the area. There was also a small mulatto community of merchants with links to missionary and other merchant colonies in Igboland and Lagos, and across the Atlantic.

The city once served as the seat of government of the Niger Coast Protectorate, Southern Protectorate and Oil River Protectorate. It was thus effectively the first Nigerian capital city.

The city was the home the first social club in Nigeria, The Africa Club, and hosted the first competitive football, cricket and field hockey games in Nigeria. Among the city's firsts were the first Roman Catholic Mass (held at 19 Bocco Street, Calabar – 1903) and the oldest secondary school (Hope Waddell Training Institution – 1895) in eastern Nigeria. The school later produced the first President of Nigeria, Nnamdi Azikiwe.

The city has an international museum, a botanical garden, a Free Trade Zone/Port, an international airport and seaport, an integrated sports stadium complex, a cultural centre, one of the most prominent universities in the country – the University of Calabar, a slave history park and several historical and cultural landmarks. It also has several standard hotels, resorts and amusement parks. The former Liberian warlord Charles Taylor lived in the old colonial palace in the city, under an agreement that led to the end of his country's civil war, before fleeing extradition to Liberia in March 2006.[citation needed]

The Tinapa Resort, a development by the Cross River State government, lies to the north of the city beside the Calabar Free Trade Zone.[9]

The Cross River State Annual Christmas Festival held every year attracts thousands from within and beyond Nigeria. The festival, includes music performance from both local and international artists. Other annual events include the Calabar Carnival, a boat regatta, fashion shows, a Christmas Village, traditional dances and the annual Ekpe Festival.

Under Köppen's climate classification, Calabar features a tropical monsoon climate with a lengthy wet season spanning ten months and a short dry season covering the remaining two months. The harmattan, which significantly influences weather in West Africa, is noticeably less pronounced in the city. Temperatures are relatively constant throughout the year, with average high temperatures usually ranging from 25 to 28 degrees Celsius. There is also little variance between daytime and nighttime temperature, as temperatures at night are typically only a few degrees lower than the daytime high temperature. Calabar averages just under 3,000 millimetres (120 in) of precipitation annually.

Calabar has three principal landlord kingdoms, namely the Qua Kingdom of Ejagham (Ekoi)/Bantu origin, the Efut and the Efik Kingdoms. The Qua Kingdom has the Ndidem of the Qua nation as the Grand Patriarch, the Efut have the Muri munene as the Grand Patriarch, and the Efik Kingdom patriarch is known as the Obong. The Efik political authority as it concerns the Obong is hinged on a political tripod: Creek Town, made up of Ambo, Cobham and Eyo; Old Town, made up of Obutong; and Duke Town, or Atakpa, made up of Duke/Archibong, Eyamba, Ntiero, Henshaw and Cobham. Each leg of this tripod at one time or the other was ruled by a separate Obong. Within the last 100 years, a gentleman's agreement to merge these three zones into one, with a single titular head as the Obong, and the distribution or opening up of the title to all Efik wards, was reached. Each of the aspirants to the throne is eminently qualified, none no more so than the other. The title of the Obong of Calabar had been held by Nsa Effiom and Ekpo Nsa in the 17th century; these two gentlemen were from the Henshaw ward. Attempts by the Henshaw to have an Obong resulted in a war in 1870. The Henshaws did not attain this title again until within the last 50 years, when David Henshaw became Obong. Cobham Town, from which Bassey Ekpo Bassey hails, had its first and only Obong recently. All this was made possible because of "the contract".

Calabar people are mainly people from the Greater Calabar district – Calabar South, Calabar Municipality, Akpabuyo, Bakassi, Biase, Odukpani and Akamkpa, but as commonly used in Nigeria, the term "Calabar people" could also refer to the indigenes of Greater Calabar as well as the people of the original South Eastern State of Nigeria who are at present the people of Akwa Ibom State and Cross River State.

Calabar is the headquarters of the Eastern Naval Command.[11] The city has a new model school, Nigerian Navy Secondary School, situated in Akpabuyo, about 10 minutes' drive from the airport. This new school complements the existing Nigerian Navy Primary School and Naval Officers Wives Association Primary School, both situated at Ikot Ansa Calabar.