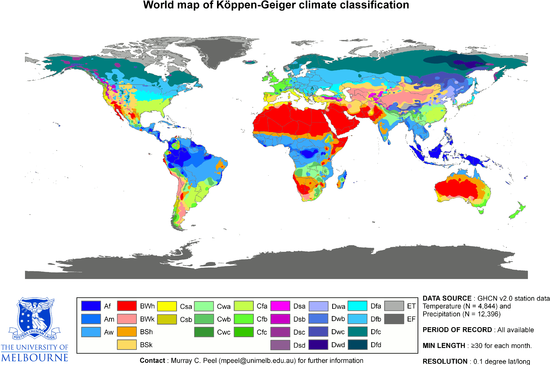 In the 1960s the Trewartha climate classification system was considered a modified Köppen system that addressed some of the deficiencies (mostly that the middle latitude climate zone was too broad) of the Köppen system.

The system is based on the concept that native vegetation is the best expression of climate. Thus, climate zone boundaries have been selected with vegetation distribution in mind. It combines average annual and monthly temperatures and precipitation, and the seasonality of precipitation.[2]:200–1

The Köppen climate classification scheme divides climates into five main groups (A, B, C, D, E), each having several types and subtypes. Each particular climate type is represented by a two- to four-letter symbol.

Tropical climates are characterized by constant high temperatures (at sea level and low elevations) — all 12 months of the year have average temperatures of 18 °C (64.4 °F) or higher. They are subdivided as follows:

Some of the places with this climate are indeed uniformly and monotonously wet throughout the year (e.g., the northwest Pacific coast of South and Central America, from Ecuador to Costa Rica; see, for instance, Andagoya, Colombia), but in many cases, the period of higher sun and longer days is distinctly wettest (as at Palembang, Indonesia) or the time of lower sun and shorter days may have more rain (as at Sitiawan, Malaysia).

A few places with this climate are found at the outer edge of the tropics, almost exclusively in the Southern Hemisphere; one example is Santos, Brazil.

(Note. The term aseasonal refers to the lack in the tropical zone of large differences in daylight hours and mean monthly (or daily) temperature throughout the year. Annual cyclic changes occur in the tropics, but not as predictable as those in the temperate zone, albeit unrelated to temperature, but to water availability whether as rain, mist, soil, or ground water. Plant response (e. g., phenology), animal (feeding, migration, reproduction, etc.), and human activities (plant sowing, harvesting, hunting, fishing, etc.) are tuned to this 'seasonality'. Indeed, in tropical South America and Central America, the 'rainy season' (and the 'high water season') is called invierno or inverno, though it could occur in the Northern Hemisphere summer; likewise, the 'dry season' (and 'low water season') is called verano or verão, and can occur in the Northern Hemisphere winter).

Also, another scenario exists under which some places fit into this category; this is referred to as the 'trade-wind littoral' climate because easterly winds bring enough precipitation during the "winter" months to prevent the climate from becoming a tropical wet-and-dry climate. Nassau, Bahamas, is included among these locations.

Most places that have this climate are found at the outer margins of the tropical zone, but occasionally an inner-tropical location (e.g., San Marcos, Antioquia, Colombia) also qualifies. Actually, the Caribbean coast, eastward from the Gulf of Urabá on the Colombia–Panamá border to the Orinoco River delta, on the Atlantic Ocean (about 4,000 km), have long dry periods (the extreme is the BSh climate (see below), characterised by very low, unreliable precipitation, present, for instance, in extensive areas in the Guajira, and Coro, western Venezuela, the northernmost peninsulas in South America, which receive <300 mm total annual precipitation, practically all in two or three months). This condition extends to the Lesser Antilles and Greater Antilles forming the circum-Caribbean dry belt. The length and severity of the dry season diminishes inland (southward); at the latitude of the Amazon River — which flows eastward, just south of the equatorial line — the climate is Af. East from the Andes, between the dry, arid Caribbean and the ever-wet Amazon are the Orinoco River's llanos or savannas, from where this climate takes its name.

These climates are characterized by actual precipitation less than a threshold value set equal to the potential evapotranspiration.[2]:212 The threshold value (in millimeters) is determined as:

Desert areas situated along the west coasts of continents at tropical or near-tropical locations are characterized by cooler temperatures than encountered elsewhere at comparable latitudes (due to the nearby presence of cold ocean currents) and frequent fog and low clouds, despite the fact that these places rank among the driest on earth in terms of actual precipitation received. This climate is sometimes labelled BWn. The BSn category can be found in foggy coastal steppes.

On occasion, a fourth letter is added to indicate if either the winter or summer is "wetter" than the other half of the year. To qualify, the wettest month must have at least 60 mm (2.4 in) of average precipitation if all 12 months are above 18 °C (64 °F), or 30 mm (1.2 in) if not; plus at least 70% of the total precipitation must be in the same half of the year as the wettest month — but the letter used indicates when the 'dry' season occurs, not the 'wet' one. This would result in Khartoum, Sudan, being reckoned as BWhw; Niamey, Niger, as BShw; Alexandria, Egypt, as BWhs; Asbi'ah, Libya, as BShs; Ömnögovi Province, Mongolia, as BWkw; and Xining, Qinghai, China, as BSkw (BWks and BSks do not exist if 0 °C in the coldest month is recognized as the h/k boundary[citation needed]). If the standards for neither w nor s are met, no fourth letter is added.

The order of these two letters is sometimes reversed, especially by climatologists in the United States.

C climates (or mesothermal) are broken down into two types: 1) A dry-summer or Mediterranean climate and a temperate climate:

Under the Köppen–Geiger classification, dry-summer (Csb) extends to additional areas not typically associated with a typical Mediterranean climate, such as much of the Pacific Northwest, much of southern Chile, parts of west-central Argentina, and areas of northern Spain and Portugal.[1] Many of these areas would be oceanic (Cfb), except dry-summer patterns meet Köppen's Cs minimum thresholds. Additional highland areas in the subtropics also meet Cs requirements, although they, too, are not normally associated with Mediterranean climates. 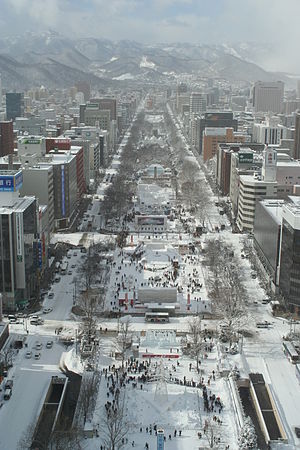 The snowy city of Sapporo

These climates have an average temperature above 10 °C (50 °F) in their warmest months, and a coldest month average below −3 °C (or 0 °C in some versions, as noted previously). These usually occur in the interiors of continents and on their upper east coasts, normally north of 40°N. In the Southern Hemisphere, group D climates are extremely rare due to the smaller land masses in the middle latitudes and the almost complete absence of land at 40–60°S, existing only in some highland locations.

Group D climates are subdivided as:

These climates are characterized by average temperatures below 10 °C in all 12 months of the year:

Over the recent years, there has been an increasing interest in using the classification to identify changes in climate and potential changes in vegetation over time.[14] The most important ecological significance of the Köppen climate classification is that it helps to predict the dominant vegetation type based on the climatic data and vice versa.[15]

Based on recent data sets from the Climatic Research Unit (CRU) of the University of East Anglia and the Global Precipitation Climatology Centre (GPCC) at the German Weather Service, a new digital Köppen–Geiger world map on climate classification for the second half of the 20th century has been compiled.[5]

The Trewartha climate classification is a climate classification system published by American geographer Glenn Thomas Trewartha in 1966, and updated in 1980. It is a modified version of the 1899 Köppen system, created to answer some of the deficiencies of the Köppen system. The Trewartha system attempts to redefine the middle latitudes to be closer to vegetation zoning and genetic climate systems. It was considered a more true or "real world" reflection of the global climate.

For example, under the standard Köppen system, western Washington and Oregon are classed into the same climate zone as southern California, even though the two regions have strikingly different weather and vegetation. Under the old Köppen system cool oceanic climates like that of London were classed in the same zone as hot subtropical cities like Savannah, GA or Brisbane, Australia. In the US, locations in the Midwest like Ohio and Iowa which have long, severe winter climates where plants are completely dormant, were classed into the same climate zone as Louisiana or northern Florida which have mild winters and a green winter landscape.

All maps use the ≥0 °C definition for temperate climates and the 18 °C annual mean temperature threshold to distinguish between hot and cold dry climates.[1]