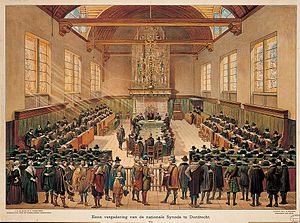 The Synod of Dort

The Canons of Dort, or Canons of Dordrecht, formally titled The Decision of the Synod of Dort on the Five Main Points of Doctrine in Dispute in the Netherlands, is the judgment of the National Synod held in the Dutch city of Dordrecht in 1618–19.[1] At the time, Dordrecht was often referred to in English as Dort.

Today the Canons of Dort form part of the Three Forms of Unity, one of the confessional standards of many of the Reformed churches around the world, including the Netherlands, South Africa, Australia, and North America. Their continued use as a standard still forms an unbridgable problem preventing close cooperation between the followers of Jacob Arminius, the Remonstrants, and Dutch Reformed Churches.

These canons are in actuality a judicial decision on the doctrinal points in dispute from the Arminian controversy of that day. Following the death of Arminius (1560–1609), his followers set forth a Remonstrance (published in 1610) in five articles formulating their points of departure from the stricter Calvinism of the Belgic Confession. The Canons are the judgment of the Synod against this Remonstrance. [2] Regardless, Arminian theology later received official acceptance by the State and has since continued in various forms within Protestantism, especially within the Methodist churches.[3]

The Canons were not intended to be a comprehensive explanation of Reformed doctrine, but only an exposition on the five points of doctrine in dispute.[citation needed] The five points of Calvinism, remembered by the mnemonic "TULIP" and popularized by a 1963 booklet,[4] are popularly said to summarize the Canons of Dort.[5] Also see Stewart's essay in chapter 3.[6] However there is no historical relationship between them, and some scholars argue that their language distorts the meaning of the Canons.[7]