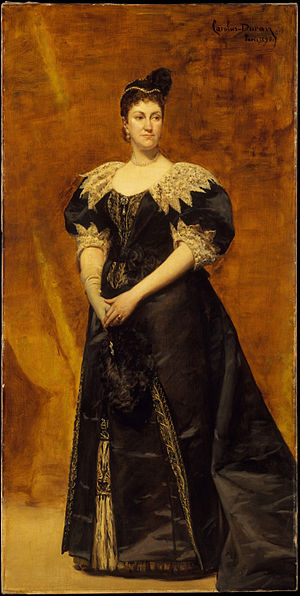 Portrait of Astor by Carolus-Duran, which was placed prominently in her house. She would stand in front of it when receiving guests for receptions. 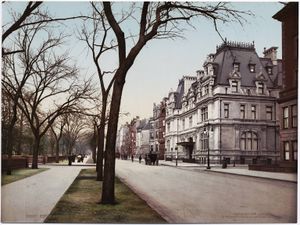 Caroline Webster "Lina" Schermerhorn (September 21, 1830 – October 30, 1908) was a prominent American socialite of the last quarter of the 19th century. Famous for being referred to later in life as "the Mrs. Astor" or simply "Mrs. Astor", she was the wife of businessman, racehorse breeder/owner, and yachtsman William Backhouse Astor, Jr. (1829–1892). Their son Colonel John Jacob Astor IV perished on the RMS Titanic. Through her marriage, she was a prominent member of the Astor family and matriarch of the male line of American Astors.

Lina was born into New York City's Dutch aristocracy, descendants of the city's original settlers. Her father, Abraham Schermerhorn, and the extended Schermerhorn family were engaged in shipping. Lina's mother was Helen White. At the time of her birth, her family lived at 1 Greenwich Street, near the Bowling Green, but the population growth and increasing urbanization of lower Manhattan in the 1830s led her family to move farther north to 36 Bond Street, near the then-ultra fashionable "Lafayette Place," which had been developed by her future husband's paternal grandfather, fur-trader John Jacob Astor. She married William Backhouse Astor, Jr. in 1853. Her husband was the middle son of real estate businessman William Backhouse Astor, Sr. (1792–1875) and Margaret Rebecca Armstrong (1800–1872).[2]

Although popularly imagined as wholly preoccupied with "Society", for the first several decades of her married life Lina Astor was principally occupied with raising her five children and running her household, typical of women of her class in mid 19th century New York City. In 1862 she and her husband built a four-bay townhouse in the newly fashionable brownstone style at 350 Fifth Avenue, the present site of the Empire State Building, next door to her husband's older brother, John Jacob Astor III; the two families were next-door neighbors for 28 years although the Astor brothers did not get along. The Astors also maintained a "summer cottage" in Newport, Rhode Island, a mansion called Beechwood, which had a ballroom grand enough to fit "The 400" - the most fashionable socialites of the day.[3]

In the decades following the Civil War the population of New York City grew almost exponentially, and immigrants and arrivistes from the Midwest began challenging the dominance of the old New York Establishment of which Astor and her family were part. Her desire to be the unchallenged grande dame of New York society was as much about preserving the heritage and traditions of her native New York, a conflict dramatized by Edith Wharton in The Age of Innocence, as it was about excluding those whom she deemed inferior.

Aided by the social arbiter Ward McAllister, whose life work was the codification and maintenance of the rules of social intercourse, Astor attempted to codify proper behavior and etiquette, which had formerly been a lingua franca among the city's Establishment, as well as determine who was acceptable among the arrivistes for an increasingly heterogeneous city.[4] McAllister once stated that, amongst the vastly rich families of Gilded Age New York, there were only 400 people who could be counted as members of Fashionable Society. He did not, as is commonly written, arrive at this number based on the limitations of Mrs. Astor's New York City ballroom. (McAllister, an Astor cousin by marriage, referred to her as the "Mystic Rose".) Her husband's lack of interest in the social whirl did not stop but instead fueled her burgeoning social activities, which increased in intensity as her children grew older.[5]

Lina was the foremost authority on the "Aristocracy" of New York in the late nineteenth century. She held ornate and elaborate parties for herself and other members of the elite New York socialite crowd. None was permitted to attend these gatherings without an official calling card from her. Lina's social groups were dominated by strong-willed "aristocratic" females. These social gatherings were dependent on overly conspicuous luxury and publicity. More so than the gatherings themselves, importance was highly placed upon the group as the upper-crust of New York's elite. She and her ladies therefore represented the "Aristocratic", or the Old Money, whereas the newly wealthy Vanderbilt family would establish a new wave of New Money.[6]

The Vanderbilts, as members of socialite New York through the copious amounts of money that the family had earned rather than inherited, represented a type of wealth that was abhorrent to Astor and her group. The Mrs. Astor found railroad money distasteful.[7] For this reason, Astor was reluctant to call upon the Vanderbilt girls. In 1883, however, Astor was forced to formally acknowledge the wealthy socialite Alva Erskine Smith, first wife of horse breeder/railroad manager William Kissam Vanderbilt, thereby providing the Vanderbilts, the greatest "new" fortune in New York, entrance into the highest rungs of society. An oft-repeated New York legend has it that Alva Vanderbilt had planned an elaborate costume ball with entertainments given by young society figures for her housewarming, but at the last minute notified young Caroline Astor (Lina's youngest daughter) that she could not participate, because Astor had never formally called on Vanderbilt. Also likely, Astor had noted the rising social profile of the Vanderbilt family, led by Alva and Willie, and viewing them as useful allies in her efforts to keep New York society exclusive had called formally on the Vanderbilts prior to Alva's lavish ball which Astor herself attended. The Vanderbilts were subsequently invited to Astor's annual ball, a formal acknowledgement of their full acceptance into the upper echelon of New York society.[8]

Mrs. Astor and the Waldorf-Astoria Hotel

Until 1887, Lina Astor had been formally known as "Mrs. William Astor", but with Charlotte Augusta Gibbes' death that year, she shortened her formal title to "Mrs. Astor", as she was then the senior Mrs. Astor, the only remaining one in her generation. Charlotte's son, William Waldorf Astor, felt that his own wife, Mary Dahlgren Paul, should be technically "the Mrs. Astor", as he was the only son of Lina's husband's elder brother John Jacob Astor III, and he insisted Lina resume use of "Mrs. William Astor". She refused, and the press sensationalized the family conflict and famously began referring to her as "The Mrs. Astor".[9]

On the death of John Jacob Astor III in 1890, William Waldorf Astor inherited his father's share of the Astor holdings and, titularly, became the head of the Astor family. His further attempts at challenging Lina's preeminence in New York society, however, were thwarted, and he soon moved with his family to England, where he later became a viscount.

In retaliation for his aunt's intransigence, William Waldorf Astor had his father's house torn down and replaced by the first Waldorf Hotel. The hotel was specifically designed to overshadow Mrs. Astor's mansion, which was right next door, in an attempt to overshadow her status with it. The Waldorf Hotel was thirteen stories tall and was built in the form of a German Renaissance chateau: it thus not only overshadowed Lina, but all other structures in the neighborhood as well. Mrs. Astor famously stated about the hotel, "There's a glorified tavern next door." Until the opulence of the Waldorf Hotel revolutionized how New York socialized publicly, polite society did not gather in public places, especially hotels. Unwilling to live next door to New York's latest sensation and public draw, she and her son, Jack, first contemplated tearing down her house and replacing it with livery stables. Eventually she and Jack tore down their house and erected another hotel at its site, the Astoria, and soon the two hotels merged and became the original Waldorf-Astoria Hotel, which was torn down in 1928 to make way for the Empire State Building.[10] 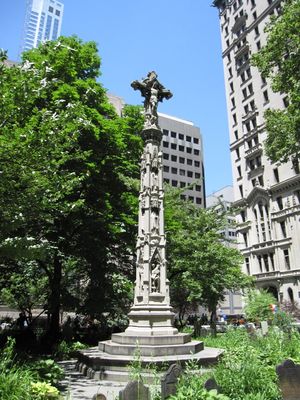 Caroline Astor arranged for a cenotaph at Trinity Church cemetery

By the time she moved into her new house facing Central Park, at the corner of 65th Street, her husband had died, and she lived with her son and his family. Astor spent her last several years suffering from periodic dementia, and she died at age 78 on October 30, 1908, and was interred in the Trinity Church Cemetery located in the far southern section of Manhattan. In addition to her uptown burial plot, a commemorative 39 foot tall (11.9 m) cenotaph erected in her memory by her youngest daughter Carrie (according to the inscription dated A.D. MDMXIV) is located within the small churchyard cemetery at the intersection of Broadway and Wall Street, in which many prominent early Americans are buried.