In music, a chorus effect (sometimes chorusing or chorused effect) occurs when individual sounds with approximately the same timbre, and very similar pitch converge and are perceived as one. While similar sounds coming from multiple sources can occur naturally, as in the case of a choir or string orchestra, it can also be simulated using an electronic effects unit or signal processing device.

When the effect is produced successfully, none of the constituent sounds are perceived as being out of tune. It is characteristic of sounds with a rich, shimmering quality that would be absent if the sound came from a single source. The effect is more apparent when listening to sounds that sustain for longer periods of time.

The chorus effect is especially easy to hear when listening to a choir or string ensemble. A choir has multiple people singing each part (alto, tenor, etc.). A string ensemble has multiple violinists and possibly multiples of other stringed instruments.

In spite of the name, most electronic chorus effects do not accurately emulate this acoustic ensemble effect. Instead, they create a constantly moving electronic shimmer.

Some instruments produce a chorus effect as part of their design: however, most don't. 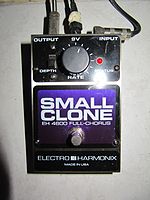 The chorus effect can be simulated by signal processing equipment. The signal processor may be software running on a computer, software running in a digital effect processor, or an analog effect processor. If the processor is hardware-based, it may be packaged as a pedal, a rack-mount module, a table-top device, or built into an instrument amplifier (often an acoustic guitar amplifier or an electric guitar amplifier). Some keyboard instruments have an electronic chorus effect built in, such as some electronic pianos and some Hammond organs.

Regardless of the technology or form factor, the processor achieves the effect by taking an audio signal and mixing it with one or more delayed, pitch-modulated copies of itself. The pitch of the added voices is typically modulated by an LFO, which makes the overall effect similar to that of a flanger, except with longer delays and without feedback.

Stereo chorus effect processors produce the same effect, but it is varied between the left and right channels by offsetting the delay or phase of the LFO. The effect is thereby enhanced because sounds are produced from multiple locations in the stereo field. Used on instruments like "clean" (undistorted) electric guitar and keyboards, it can yield very dreamy or ambient sounds. Commercial chorus effect devices often include controls that enable them to be used to also produce delay, reverberation, or other related effects that use similar hardware, rather than exclusively as chorus effects.

The voix céleste [Fr.] (heavenly voice) is an organ stop consisting of either one or two ranks of pipes slightly out of tune. The term celeste refers to a rank of pipes detuned slightly so as to produce a beating effect when combined with a normally tuned rank. It is also used to refer to a compound stop of two or more ranks in which at the ranks are detuned relative to each other.[2]