The Civil Rights Cases, 109 U.S. 3 (1883),[2] were a group of five similar cases consolidated into one issue for the United States Supreme Court to review. The Court held that Congress lacked the constitutional authority under the enforcement provisions of the Fourteenth Amendment to outlaw racial discrimination by private individuals and organizations, rather than state and local governments.

More particularly, the Court held that the Civil Rights Act of 1875, which provided that "all persons within the jurisdiction of the United States shall be entitled to the full and equal enjoyment of the accommodations, advantages, facilities, and privileges of inns, public conveyances on land or water, theaters, and other places of public amusement; subject only to the conditions and limitations established by law, and applicable alike to citizens of every race and color, regardless of any previous condition of servitude" was unconstitutional.

Decision of the Court 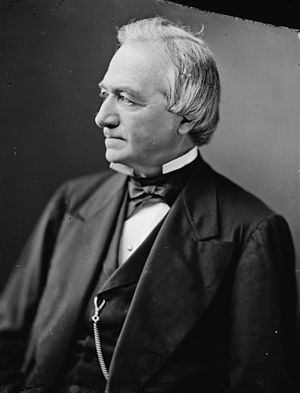 Joseph P. Bradley authored the opinion of the court.

The Court, in an 8-1 decision by Justice Joseph P. Bradley, held that the language of the 14th Amendment, which prohibited denial of equal protection by a state, did not give Congress power to regulate these private acts, because it was the result of conduct by private individuals, not state law or action, that blacks were suffering.[1] Section five empowers Congress only to enforce the prohibition on state action. Legislation by Congress on subjects which are within the domain of the state are not authorized by the 14th Amendment. Private acts of racial discrimination were simply private wrongs that the national government was powerless to correct.[3] Bradley commented that “individual invasion of individual rights is not the subject-matter of the [14th] Amendment. It has a deeper and broader scope. It nullifies and makes void all state legislation, and state action of every kind, which impairs the privileges and immunities of citizens of the United States, or which injures them in life, liberty or property without due process of law, or which denies to any of them the equal protection of the laws.”[4]

The Court also acknowledged that the 13th Amendment does apply to private actors, but only to the extent that it prohibits people from owning slaves, not exhibiting discriminatory behavior.[1] The Court said that "it would be running the slavery argument into the ground to make it apply to every act of discrimination which a person may see fit to make as to guests he will entertain, or as to the people he will take into his coach or cab or car; or admit to his concert or theatre, or deal with in other matters of intercourse or business."

Justice Harlan challenged the Court's narrow interpretation of the Thirteenth and Fourteenth Amendments in his dissent for all five of the cases. As he noted, Congress was attempting to overcome the refusal of the states to protect the rights denied to African-Americans that white citizens took as their birthright. 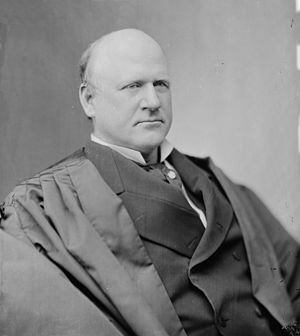 John Marshall Harlan, became known as the "Great Dissenter" for his fiery dissent in Civil Rights Cases and other early civil rights cases

Among other things, Harlan mentioned that private railroads (Olcott v. Supervisors 1872 83 U.S. 678, 16 Wall. 694)[5] are by law public highways, and it is the function of the government to make and maintain highways for the conveyance of the public; that innkeepers have long been held to be "a sort of public servants" (Rex v. Ivens 1835 7 Car. & P. 213)[6] that had no right to deny to anyone "conducting himself in a proper manner" admission to his inn; and that public amusements are maintained under a license coming from the public.

Harlan thus noted that permitting discrimination in those areas would affect public, not private, interests, and argued that permitting such discrimination would impinge upon the black citizens' freedom of travel, a fundamental aspect of liberty (quoting Blackstone, "Personal liberty consists in the power of locomotion.. or removing one's person to whatever place one's one inclination may direct, without restraint, unless by due course of law.") Restriction on the freedom of travel, Harlan noted, would be "a badge of servitude" in violation of the Thirteenth amendment (that banned both slavery and involuntary servitude). He also found that the lack of protection from the 1875 Civil Rights Act would result in the violation of the Privileges or Immunities Clause of the Fourteenth Amendment, largely on the same grounds ("In every material sense applicable to the practical enforcement of the fourteenth amendment, railroad corporations, keepers of inns, and managers of places of public amusements are agents of the state, because amenable, in respect of their public duties and functions, to public regulation. It seems to me that, within the principle settled in Ex parte Virginia, a denial by these instrumentalities of the state to the citizen, because of his race, of that equality of civil rights secured to him by law, is a denial by the state within the meaning of the fourteenth amendment. If it be not, then the race is left.. at the mercy of corporations and individuals wielding power under public authority... What I affirm is that no state.. nor any corporation or individual wielding power under state authority for the public benefit or the public convenience, can.. discriminate against freemen or citizens... The rights which congress, by the act of 1875, endeavored to secure and protect are legal, not social, rights.")

Consequences of the decision

The decision met with public protest across the country, and led to regular "indignation meetings" held in numerous cities.[7] The Supreme Court decision severely restricted the power of the federal government to guarantee equal status under the law to blacks. State officials in the South took advantage of the eclipsed role of Congress in the prohibition of racial discrimination and proceeded to embody individual practices of racial segregation into laws that legalized the treatment of blacks as second-class citizens for another seventy years. The court's decision thus ultimately led to the enactment of state laws, such as Jim Crow Laws, which codified what had previously been individual adherence to the practice of racial segregation.[1] Several northern and western states however did not follow suit and began instead enacting their own bans on discrimination in public places.[8]

Harlan correctly predicted the decision's long-term consequences: it put an end to the attempts by Radical Republicans to ensure the civil rights of blacks and ushered in the widespread segregation of blacks in housing, employment and public life that confined them to second-class citizenship throughout much of the United States until the passage of civil rights legislation in the 1960s in the wake of the Civil Rights Movement.

Furthermore, "[i]n the wake of the Supreme Court ruling, the federal government adopted as policy that allegations of continuing slavery were matters whose prosecution should be left to local authorities only – a de facto acceptance that white southerners could do as they wished with the black people in their midst."[9]

The decision that the Reconstruction-era Civil Rights Acts were unconstitutional has not been overturned; on the contrary, the Supreme Court reaffirmed this limited reading of the Fourteenth Amendment in United States v. Morrison, 529 U.S. 598 (2000), in which it held that Congress did not have the authority to enact parts of the Violence Against Women Act.

The Court has, however, upheld more recent civil rights laws based on other powers of Congress. Title II of the Civil Rights Act of 1964 generally revived the ban on discrimination in public accommodations that was in the Civil Rights Act of 1875, but under the Commerce Clause of Article I instead of the 14th Amendment; the Court held it to be constitutional in Heart of Atlanta Motel v. United States, 379 U.S. 241 (1964).