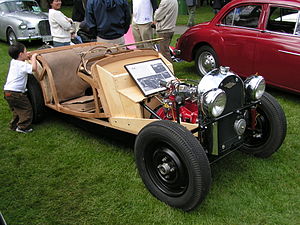 Coachwork is the body of a motor vehicle (automobile, bus or truck), a horse-drawn coach or carriage (whence the term originated, derived from the Hungarian town of Kocs),[1] or, by extension, a railroad car or railway carriage. The term is usually reserved for bodies built on a separate chassis, rather than being of unitary or monocoque construction. With reference to motor vehicles, auto body is the standard term in North American English. An obsolescent synonym is carrossery (plural: carosseries). 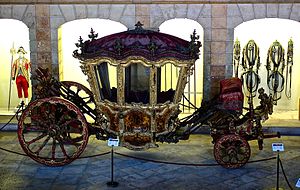 A British trade association the Worshipful Company of Coachmakers and Coach Harness Makers, was incorporated in 1630. Some British coachmaking firms operating in the 20th century were established even earlier. Rippon was active in the time of Queen Elizabeth I, Barker founded in 1710 by an officer in Queen Anne's Guards, Brewster a relative newcomer (though oldest in the U.S.), formed in 1810.[2]

In the early motoring days, when series production did not yet exist, the process of acquiring a new vehicle needed two major decisions. Already accustomed to ordering carriages from a coachbuilder the buyer would select an automobile manufacturer to provide only the rolling chassis, comprising: chassis, drivetrain (engine, gearbox, differential, axles, wheels), suspension, steering system and the radiator - the radiator, or merely its shell, soon became the only visual element identifying the chassis brand. The customer would also approach a coachbuilder, requesting a personal body design to be fitted on the new chassis. Initially, the long-established and refined skills and tools (such as the English wheel) used to build the wooden and metal bodies of vehicles were so specialized, most manufacturers contracted with existing coachbuilders to produce bodies. For example, Fisher Body built all of Cadillac's closed bodies in the 1910s. Some coachbuilders became so identified with a particular company, they eventually became corporate models, as in the case of LeBaron.

Commonly, larger dealers or distributors of ultra-luxury cars would order for stock chassis and particular bodies thought most likely to sell and have them made in suitable quantities for sale off their showroom floor.

Though automobile manufacturers brought body building skills in-house, the practice of bespoke or custom coachbuilding remained in favour among the rich, who continued the habit of centuries past. All ultra-luxury vehicles sold as chassis only. For instance, when Duesenberg introduced their Model J, it was offered as chassis only, for $8,500. Other examples include the Bugatti Type 57, Cadillac V-16, Ferrari 250, Isotta Fraschini Tipo 8 and all Rolls-Royces produced before World War II. Delahaye had no in-house coachworks, so all its chassis were bodied by independents, who created some of their most attractive designs on the Type 135. Most of the Delahayes[citation needed] were bodied by Chapron, Labourdette, Franay, Saoutchik, Figoni & Falaschi, Pennock and many more.[clarification needed]

The advent of unibody construction, where the car body is unified with, and structurally integral to the chassis, made custom coachbuilding (in the traditional sense of putting a bespoke body on a factory supplied separate chassis) practically impossible. Many coachbuilders closed down, were bought by manufacturers or changed their core business to other activities: 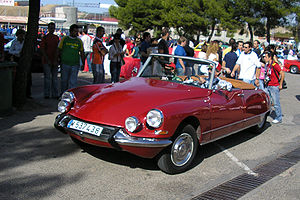 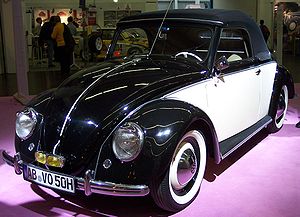 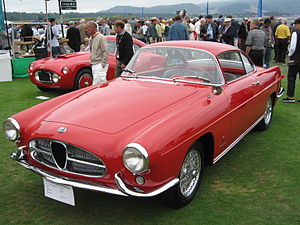 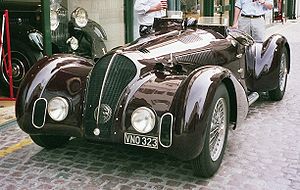 Independent coachbuilders survived for a time after the mid-20th century for the chassis produced by low-production companies such as Rolls-Royce, Ferrari, Bentley.[3] Producing body dies is extremely expensive (a single door can run to US$40,000), which is usually only considered practical when large numbers are involved — though that was the path taken by Rolls-Royce and Bentley after 1945 for their own in-house production. In view of the high cost of dies for pressing metal panels from the mid 20th century many vehicles, most notably the Chevrolet Corvette, were clothed with large panels of glass-fibre reinforced resin requiring inexpensive moulds. Glass has since been replaced by more sophisticated materials but generally these replace, if necessary hand-formed, metal only where weight is of paramount importance.

Coachbuilders are: carrossiers in French, carrozzeria in Italian, karosseriebauer in German and carroceros in Spanish.

In reference to a recreational vehicle or motorhome, coach-built means a vehicle which has been purpose-built, using only a chassis as a base vehicle, as opposed to a conversion which is built inside an existing vehicle body.

Survivors of the unibody production-line system