From Infogalactic: the planetary knowledge core
Jump to: navigation, search
For other uses, see Committee (disambiguation). 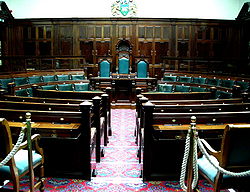 A committee (or "commission") is a body of one or more persons that is subordinate to a deliberative assembly. Usually, the assembly sends matters into a committee as a way to explore them more fully than would be possible if the assembly itself were considering them. Committees may have different functions and the type of work that each committee does would depend on the type of organization and its needs.

A deliberative assembly may form a committee (or "commission") consisting of one or more persons to assist with the work of the assembly.[1] For larger organizations, much work is done in committees.[2] Committees can be a way to formally draw together people of relevant expertise from different parts of an organization who otherwise would not have a good way to share information and coordinate actions. They may have the advantage of widening viewpoints and sharing out responsibilities. They can also be appointed with experts to recommend actions in matters that require specialized knowledge or technical judgment.

As a tactic for indecision

As a means of public relations by sending sensitive, inconvenient, or irrelevant matters to committees, organizations may bypass, stall, or disacknowledge matters without declaring a formal policy of inaction or indifference. However, this could be considered a dilatory tactic.[5]

Generally, committees are required to report to their parent body. Committees do not usually have the power to act independently unless the body that created it gives it such power.[2]

When a committee is formed, a chairman (or "chair" or "chairperson") is designated for the committee.[6] Sometimes a vice-chairman (or similar name) is also appointed.[7] It is common for the committee chairman to organize its meetings. Sometimes these meetings are held through videoconferencing or other means if committee members are not able to attend in person, as may be the case if they are in different parts of the country or the world.

The chairman is responsible for running meetings. Duties include keeping the discussion on the appropriate subject, recognizing members to speak, and confirming what the committee has decided (through voting or by unanimous consent). Using Roberts Rules of Order, committees may follow informal procedures (such as not requiring motions if it's clear what is being discussed).[8] The level of formality depends on the size and type of committee, in which sometimes larger committees considering crucial issues may require more formal processes.

Minutes are a record of the decisions at meetings. They can be taken by a person designated as the secretary. For most organizations, committees are not required to keep formal minutes.[8] However, some bodies require that committees take minutes, especially if the committees are public ones subject to open meeting laws.

Committees may meet on a regular basis, such as weekly or more often, or meetings may be called irregularly as the need arises. The frequency of the meetings depend on the work of the committee and the needs of the parent body.

When the committee completes its work, it provides the results in a report to its parent body. The report may include the methods used, the facts uncovered, the conclusions reached, and any recommendations.[9] If the committee is not ready to report, it may provide a partial report or the assembly may discharge the committee of the matter so that the assembly can handle it. Also, if members of the committee are not performing their duties, they may be removed or replaced by the appointing power.[10] Whether the committee continues to exist after presenting its report depends on the type of committee. Generally, committees established by the bylaws or the organization's rules continue to exist, while committees formed for a particular purpose go out of existence after the final report.

A conference committee in the United States Congress is a temporary panel of negotiators from the House of Representatives and the Senate. Unless one chamber decides to accept the other's original bill, the compromise version must pass both chambers after leaving the conference committee. The committee is usually composed of the senior members of the standing committees that originally considered the legislation in each chamber.

Different use of term

A standing committee is a subunit of a political or deliberative body established in a permanent fashion to aid the parent assembly in accomplishing its duties. A standing committee is granted its scope and powers over a particular area of business by the governing documents.[15] Standing committees meet on a regular or irregular basis depending on their function, and retain any power or oversight originally given them until subsequent official actions of the governing body (through changes to law or by-laws) disbands the committee.

Most governmental legislative committees are standing committees. The phrase is used in the legislatures of the following countries:

Under the laws of the United States of America, a standing committee is a Congressional committee permanently authorized by United States House of Representatives and United States Senate rules. The Legislative Reorganization Act of 1946 greatly reduced the number of committees, and set up the legislative committee structure still in use today, as modified by authorized changes via the orderly mechanism of rules changes.

A steering committee is a committee that provides guidance, direction and control to a project within an organization.[18] The term is derived from the steering mechanism that changes the steering angle of a vehicle's wheels.

Project steering committees are frequently used for guiding and monitoring IT projects in large organizations, as part of project governance. The functions of the committee might include building a business case for the project, planning, providing assistance and guidance, monitoring the progress, controlling the project scope and resolving conflicts.

As with other committees, the specific duties and role of the steering committee vary among organizations.

A special committee (or working, select, or ad hoc committee) is established to accomplish a particular task or to oversee a specific area in need of control or oversight.[19] Many are research or coordination committees in type or purpose, and are temporary. Some are a sub-group of a larger society with a particular area of interest which are organized to meet and discuss matters pertaining to their interests. For example, a group of astronomers might be organized to discuss how to get the larger society to address near earth objects. A subgroup of engineers and scientists of a large project's development team could be organized to solve some particular issue with offsetting considerations and trade-offs. Once the committee makes its final report to its parent body, the special committee ceases to exist.[19]

A committee that is a subset of a larger committee is called a subcommittee. Committees that have a large workload may form subcommittees to further divide the work. Subcommittees report to the parent committee and not to the general assembly.[8][20]

Committee of the whole

Main article: Committee of the whole

When the entire assembly meets as a committee to discuss or debate, this is called a "committee of the whole". This is not an actual committee but a procedural device that is more commonly used in legislative bodies.