Diarmait Mac Murchada (Modern Irish: Diarmaid Mac Murchadha), anglicised as Dermot MacMurrough or Dermod MacMurrough (c. 1110 – c. 1 May 1171), was a King of Leinster in Ireland. In 1167, he was deprived of his kingdom by the High King of Ireland – Ruaidri Ua Conchobair. The grounds for the dispossession were that Mac Murchada had, in 1152, abducted Derbforgaill, the wife of the King of Breifne, Tiernan O'Rourke (Irish: Tighearnán Ua Ruairc). To recover his kingdom, Mac Murchada solicited help from King Henry II of England. In return, Mac Murchada pledged an oath of allegiance to Henry, who sent troops in support. As a further thanks for his reinstatement, Mac Murchada's daughter Aoife was married to Richard de Clare, the 2nd Earl of Pembroke (nicknamed "Strongbow"). Henry II then mounted a larger second invasion in 1171 to ensure his control over Strongbow, resulting in the Lordship of Ireland. Mac Murchada was later known as Diarmait na nGall (Irish for "Diarmait of the Foreigners").

Mac Murchada was born around 1110, a son of Donnchad mac Murchada, King of Leinster and Dublin. His father's grandmother Dervorgilla (Derbforgaill) was a daughter of Donnchad, King of Munster and therefore she was a granddaughter of Brian Boru.[1] His father was killed in battle in 1115 by his cousin Sigtrygg Silkbeard, king of the Dublin Vikings, and was buried by them in Dublin along with the body of a dog, considered to be a huge insult.

Mac Murchada had two wives (as allowed under the Brehon Laws), the first of whom, Sadb Ní Faeláin, was mother of a daughter named Órlaith who married Domnall Mór, King of Munster. His second wife, Mór Ní Tuathail, was mother of Aoife / Eva of Leinster and his youngest son Conchobar Mac Murchada. He also had two other sons, Domhnall Caomhánach mac Murchada and Énna Cennselach mac Murchada (blinded 1169). Diarmait Mac Murchada is buried in the Cathedral graveyard of Ferns village.[2]

After the death of his older brother, Énna Mac Murchada, Diarmait unexpectedly became King of Leinster. This was opposed by the then High King of Ireland, Toirdelbach Ua Conchobair who feared (rightly) that Mac Murchada would become a rival. Toirdelbach sent one of his allied Kings, the belligerent Tigernán Ua Ruairc (Tiernan O'Rourke) to conquer Leinster and oust the young Mac Murchada. Ua Ruairc went on a brutal campaign slaughtering the livestock of Leinster and thereby trying to starve the province's residents. Mac Murchada was ousted from his throne, but was able to regain it with the help of Leinster clans in 1132. Afterwards followed two decades of an uneasy peace between Ua Conchobair and Diarmait. In 1152 he even assisted the High King to raid the land of Ua Ruairc who had by then become a renegade.

Mac Murchada also is said to have abducted Ua Ruairc's wife Derbforgaill (English: Dervorgilla) along with all her furniture and goods, with the aid of Derbforgaill's brother, a future pretender to the kingship of Meath. Other sources[who?] say that Derbforgaill was not an unwilling prisoner and that she remained in Ferns with Mac Murchada in comfort for a number of years. Her advanced age indicates that she may have been a refugee or a hostage. Whatever the reality, the abduction was given as a further reason for enmity between the two kings.

As king of Leinster, in 1140–70 Diarmait commissioned Irish Romanesque churches and abbeys at:

He sponsored convents (nunneries) at Dublin (St Mary's, 1146), and in c.1151 two more at Aghade, County Carlow and at Kilculliheen near Waterford city.

He also sponsored the successful career of churchman St Lawrence O'Toole (Lorcan Ua Tuathail). He married O'Toole's half-sister Mor in 1153 and presided at the synod of Clane in 1161 when O'Toole was installed as archbishop of Dublin.[3] 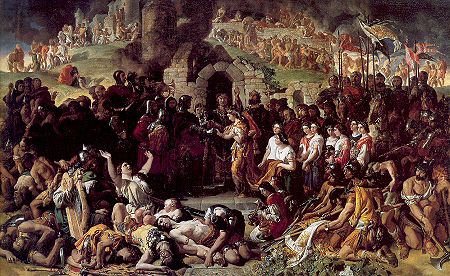 The Marriage of Aoife and Strongbow (1854) by Daniel Maclise, a romanticised depiction of the union between Aoife and Richard de Clare in the ruins of Waterford.

In 1166, Ireland's new High King and Mac Murchada's only ally Muirchertach Ua Lochlainn had fallen, and a large coalition led by Tigernán Ua Ruairc (Mac Murchada's arch enemy) marched on Leinster. The High King deposed Mac Murchada from the throne of Leinster. Mac Murchada fled to Wales and from there to England and France seeking the support of Henry II of England in the recruitment of soldiers to reclaim his kingship. Henry authorised Diarmait to seek help from the soldiers and mercenaries in his kingdom. Those who agreed to help included Richard de Clare (now called "Strongbow", but not by contemporaries) and half-brothers Robert Fitz-Stephen and Maurice FitzGerald. Robert was accompanied by his half-nephew Robert de Barry. Strongbow was offered Diarmait's daughter Aoife in marriage and promised the kingship of Leinster on Diarmait's death. Robert and Maurice were promised lands in Wexford and elsewhere for their services. In Mac Murchada's absence, Ruaidrí Ua Conchobair (son of Mac Murchada's former enemy, the High King Turlough Mór O'Connor) had become the new High King of Ireland.

On returning to Wales, Robert fitz Stephen helped him organise a mercenary army of English and Welsh soldiers. Landing at Bannow Bay, they laid siege to Wexford which fell in May 1169. After a period of inactivity, they went on to raid the Kingdom of Ossory. They then launched raids to the north, in the territories of the Uí Tuathail, the Uí Broin and the Uí Conchobhair. He marched on Tara (the political capital at the time) to oust O'Connor. Mac Murchada gambled that the High King would not hurt the Leinster hostages which he had (including Mac Murchada's eldest son, Conchobar Mac Murchada). However Ua Ruairc forced his hand and they were all killed. Although he had been distracted by disturbances else where in the kingdom, the High King could no longer ignore this powerful force.

He marched his forces into Leinster and, with the mediation of the Church, the commanders of the two armies began negotiations at Ferns, Diarmait's political base. An agreement was reached, whereby Diarmait was allowed to remain King of Leinster with Diarmait for his part recognising Ua Conchobair as High King. Some historians maintain that the treaty with Ua Conchobair included a secret agreement whereby Diarmait undertook to bring in no more foreign mercenaries and to send away Robert fitz Stephen and his men as soon as Leinster was subdued.[4] It's possible that Mac Murchada's hand may have been forced by the arrival at Wexford in May 1170 of Maurice FitzGerald, Lord of Lanstephan and his force of 10 knights, thirty men-at-arms and a hundred archers and foot soldiers. Mac Murchada and fitz Gerald marched on the Ostman Norse–Gaelic city of Dublin which surrendered. Within a short time, all Leinster was again in Mac Murchada's control. Emboldened by these victories, he sent Robert fitz Stephen to the assistance of his son-in-law, Domnall Mór Ua Briain, the King of Thomond.

In the opinion of some historians, Mac Murchada's plans may have been limited to the recovery of his throne; only later when the superiority of the mercenary arms had overawed the Gaelic nobility of Ireland did he consider tilting at the high kingship itself.[5] According to the contemporary, Gerald of Wales, he was advised by Robert fitz Stephen and Maurice fitz Gerald to write to Strongbow requesting assistance. Strongbow sent an advance party under Raymond le Gros, arriving himself 1170 at the Ostman Norse-Gaelic settlement of Waterford. Following the fall of Waterford, the promised marriage of Aoife and Strongbow took place. As a result, much of Richard fitz Gilbert, count of Strigoil, became lord of Leinster.[6] The marriage was imagined and painted in the Romantic style in 1854 by Daniel Maclise.

Mac Murchada was devastated after the death of his youngest son, Conchobar, retreated to Ferns and died a few months later.

The scholar Áed Ua Crimthainn was probably Diarmait's court historian. In his Book of Leinster, Áed seems to be the first to set out the concept of the rí Érenn co fressabra, the "king of Ireland with opposition", later more widely adopted. This described Diarmait's ambitions and the achievements of his great-grandfather Diarmait mac Maíl na mBó.[7]

In Irish history books written after 1800, Diarmait Mac Murchada was often seen as a traitor, but his intention was not to aid an English invasion of Ireland, but rather to use Henry's assistance to become the High King of Ireland himself. The imperialism of the English, and later British, empire must not be placed anachronistically on to the events of 1166x71. The adventurers who answered Diarmait's call for help were reacting to the opportunity for land and wealth. Henry II did not wish to invade Ireland, he was forced to react to earl Richard's aggrandisement. The counts of Strigoil had been supporters of King Stephen, and Henry II did not forget easily.

Gerald of Wales, a Cambro-English cleric who visited Ireland in 1185 and whose uncles and cousins were prominent soldiers in the army of Strongbow, repeated their opinions of Mac Murchada: 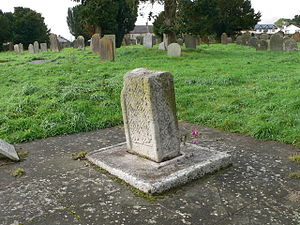 Gravestone at Ferns Cathedral. This is said to be the gravestone of Mac Murchada.

After Strongbow's successful invasion, Henry II mounted a second and larger invasion in 1171 to ensure his control over his subjects, which succeeded. He then accepted the submission of the Irish kings in Dublin in November 1171. He also ensured that his moral claim to Ireland, granted by the supposed 1155 papal bull Laudabiliter, was reconfirmed in 1172 by Pope Alexander III, and also by a synod of all the Irish bishops at the Synod of Cashel. He added "Lord of Ireland" to his many other titles. Before he could consolidate his new Lordship he had to go to France to deal with his sons' rebellion in 1173.

Ruaidrí Ua Conchobair was soon ousted, first as High King and eventually as King of Connacht. Attempting to regain his provincial kingdom, he turned to the English as Mac Murchada had before him. The Lordship directly controlled a small territory in Ireland surrounding the cities of Dublin and Waterford, while the rest of Ireland was divided between English lords and court curiales. The 1175 Treaty of Windsor, brokered by St Lawrence O'Toole with Henry II, formalised the submission of the Gaelic clans that remained in local control, like the Uí Conchobair who retained Connacht and the Uí Néill who retained most of Ulster.

Diarmait's male-line descendants such as Art Mac Art continued to rule parts of Leinster until the Tudor conquest of Ireland in the 16th century.

Diarmait died about 1 May 1171 and was buried in Ferns Cathedral, where his grave can be seen in the outside graveyard.

In the play The Dreaming of the Bones by W. B. Yeats, the ghosts of Dermot and Derbforgaill rescue an Irish freedom fighter during the Easter Week rebellion, and reveal that they are bound until an Irishman can forgive them for bringing the English to Ireland.[8]