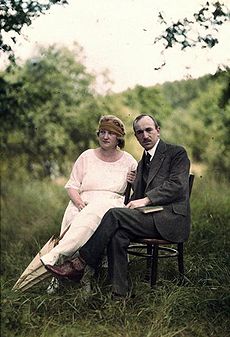 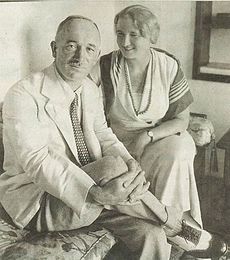 Edvard Beneš with his wife 1934 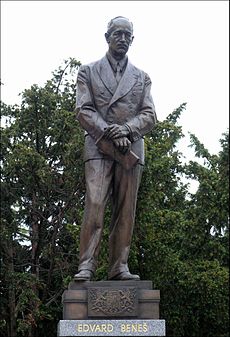 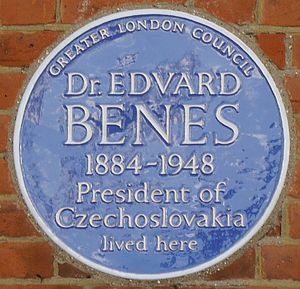 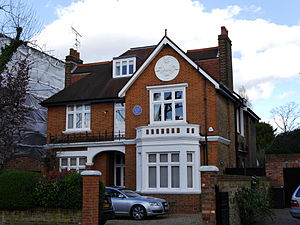 Edvard Beneš was born into a peasant family in the small town of Kožlany, Bohemia, in the Empire of Austria-Hungary, on 17 May 1884.[2] His brother was the Czechoslovak politician Vojta Beneš. His nephew Bohuš Beneš, a diplomat and son of his brother Václav, was the father of Emilie Benes Brzezinski and Václav E. Beneš, a Czech-American mathematician.[3]

Beneš spent much of his youth in the Vinohrady district of Prague, where he attended a grammar school from 1896 to 1904. During this time he played football for Slavia Prague.[4] After studies at the Faculty of Philosophy of the Charles University in Prague, he left for Paris and continued his studies at the Sorbonne and at the Independent School of Political and Social Studies (École Libre des Sciences Politiques). He completed his first degree in Dijon, where he received his doctorate of law in 1908. He then taught for three years at the Prague Academy of Commerce, and after his habilitation in the field of philosophy in 1912, he became a lecturer in sociology at Charles University. He was also involved in Scouting.[5]

During World War I, Beneš was one of the leading organizers of an independent Czechoslovakia from abroad. He organized a Czech pro-independence anti-Austrian secret resistance movement called "Maffia". In September 1915, he went into exile, and in Paris he made intricate diplomatic efforts to gain recognition from France and the United Kingdom for the Czechoslovak independence movement. From 1916–1918 he was a Secretary of the Czechoslovak National Council in Paris and Minister of the Interior and of Foreign Affairs in the Provisional Czechoslovak government.

In May 1918, Beneš, Tomáš Garrigue Masaryk and Milan Rastislav Štefánik were reported to be organizing a Czecho-Slovak army to fight for the Western Allies in France, recruited from among Czechs and Slovaks able to get to the front and also from the large emigrant populations in the United States, said to number more than 1,500,000.[6] The force grew into one of tens of thousands and took part in several battles, including Zborov and Bakhmach.

From 1918 to 1935, Beneš was the first and longest-serving Foreign Minister of Czechoslovakia, a post he held through 10 successive governments, one of which he headed himself from 1921 to 1922. He served in parliament from 1920–1925 and from 1929–1935. He represented Czechoslovakia in talks on the Treaty of Versailles. He briefly returned to the academic world as a professor in 1921.

When President Tomáš Masaryk retired in 1935, Beneš was the obvious choice as his successor.

He opposed Nazi Germany's claim to the German-speaking Sudetenland in 1938. In October 1938 Italy, France and Great Britain signed the Munich Agreement, which allowed for the immediate annexation and military occupation of the Sudetenland by Germany. Czechoslovakia was not consulted on this agreement. Beneš only agreed after France and the United Kingdom let it be known that, if he did not do so, they would become uninterested in the fate of Czechoslovakia (their military alliance with Czechoslovakia notwithstanding).[7]

Beneš was forced to resign on 5 October 1938 under German pressure.[7] Emil Hácha was chosen as President. In March 1939, Hácha's government was bullied into authorising the German occupation of the remaining Czech territory. (Slovakia had declared its nominal independence by then.)

On 22 October 1938 Beneš went into exile in Putney, London. In October 1939, he organised the Czechoslovak National Liberation Committee. In November 1940 in the wake of the London Blitz, Beneš, his wife, their nieces, and his household staff moved to the Abbey at Aston Abbotts near Aylesbury in Buckinghamshire. The staff of his private office, including his Secretary Edvard Táborský and his chief of staff Jaromír Smutný, moved to the Old Manor House in the neighbouring village of Wingrave, while his military intelligence staff headed by František Moravec was stationed in the nearby village of Addington. In 1940, the UK recognised the National Liberation Committee as the Czechoslovak Government-in-Exile, with Jan Šrámek as Prime Minister and Beneš as President. In reclaiming the presidency, Beneš took the line that his 1938 resignation had been under duress, and was therefore void.

In 1941 Beneš and František Moravec planned Operation Anthropoid, with the intention of assassinating Reinhard Heydrich[8] a high-ranking German Nazi official responsible for suppressing Czech culture and deporting and executing members of the Czech resistance. This was implemented in 1942, and resulted in brutal German reprisals such as the execution of thousands of Czechs and the eradication of the two villages of Lidice and Ležáky.

After the Prague uprising at the end of World War II, Beneš returned home and reassumed his former position as President. He was unanimously confirmed in office the National Assembly on 28 October 1945. Under article 58.5 of the Constitution, "The former president shall stay in his or her function till the new president shall be elected." On 19 June 1946 Beneš was formally elected to his second term as President.[12]

The Beneš decrees (officially called "Decrees of the President of the Republic"), among other things, expropriated the property of citizens of German and Hungarian ethnicity, and facilitated Article 12 of the Potsdam Agreement by laying down a national legal framework for loss of citizenship[citation needed] and expropriation of property of about three million Germans and Hungarians.

Beneš presided over a coalition government, the National Front, from 1946 headed by Communist leader Klement Gottwald as prime minister. On 21 February 1948, 12 non-Communist ministers resigned to protest Gottwald's refusal to stop the packing of the police with Communists, despite a majority of the Cabinet ordering it to end. The non-Communists believed that Beneš would side with them and allow them to stay in office as a caretaker government pending elections.

Beneš initially refused to accept their resignations and insisted that no government could be formed without the non-Communist parties. However, Gottwald threatened a general strike unless Beneš appointed a Communist-dominated government. The Communists also occupied the offices of the non-Communists who had resigned. Amid fears that civil war was imminent and rumours that the Red Army would sweep in to back Gottwald, Beneš gave way on 25 February. He accepted the resignations of the non-Communist ministers and appointed a new government in accordance with Gottwald's specifications. It was nominally still a coalition, but was dominated by Communists and fellow travelers—in effect, giving legal sanction to a Communist coup d'état.

Shortly afterward, elections were held in which voters were presented with a single list from the Communist-dominated National Front. The newly elected National Assembly approved the Ninth-of-May Constitution shortly after being sworn in. Although it was not a completely Communist document, it was close enough to the Soviet Constitution that Beneš refused to sign it. He resigned as President on 7 June 1948; Gottwald succeeded him.

Beneš had been in poor health since suffering two strokes in 1947, and was a broken man after seeing a situation come about that he had made it his life's work to avoid. He died of natural causes at his villa in Sezimovo Ústí, Czechoslovakia on 3 September 1948.[2] He is interred in the garden of his villa, and his bust is part of the gravestone. His wife (who lived until 2 December 1974) is interred beside him.

In 1934 H.G.Wells wrote "The Shape of Things to Come", a prediction of the Second World War. In Wells' depiction the war starts in 1940 and drags on until 1950, Czechoslovakia avoids being occupied by Germany, and Beneš remains its President throughout. Wells assigns to Beneš the role of initiating a cease-fire to end the fighting, and the book (supposedly written in the 22nd Century) remarks that "The Beneš Suspension of Hostilities remains in force to this day".

In Prague Counterpoint, the second volume of Bodie and Brock Thoene's Zion Covenant Series, Hitler appoints an assassin to kill Beneš—who fails due to being tackled by an American journalist (and captured by Beneš' bodyguards). But Hitler later uses the execution of this Sudeten Nazi to proclaim him a martyr as a continuing fuse to the Sudeten Crisis.