Elizabeth von Arnim (31 August 1866 – 9 February 1941), born Mary Annette Beauchamp, was an Australian-born British novelist. By marriage she became Gräfin (Countess) von Arnim-Schlagenthin, and by a second marriage, Countess Russell. Although known in her early life as Mary, after the publication of her first book, she was known to her readers, eventually to her friends, and finally even to her family as Elizabeth[1] and she is now invariably referred to as Elizabeth von Arnim. She also wrote under the pen name Alice Cholmondeley.

She was born at her family's holiday home in Kirribilli Point, Australia. When she was three years old, the family returned to England where she was raised. Her parents were Henry Herron Beauchamp (1825–1907), merchant, and her mother Elizabeth (Louey) Weiss Lassetter (1836–1919). Arnim had four brothers, a sister, and a cousin from New Zealand, Kathleen Beauchamp, who later married John Middleton Murry and wrote under the pen name Katherine Mansfield.[2]

In 1891, Elizabeth married Count Henning August von Arnim-Schlagenthin, a Prussian aristocrat, whom she had met during an Italian tour with her father. They lived in Berlin and eventually moved to the countryside where, in Nassenheide, Pomerania, the Arnims had their family estate. The couple had five children, four daughters and a son. The children's tutors at Nassenheide included E. M. Forster and Hugh Walpole.[3]

In 1908 Arnim left Nassenheide to return to London.[2] Count von Arnim died in 1910, and later that year she moved to Randogne, Switzerland, where she built the Chalet Soleil and entertained literary and society friends.[4] From 1910 until 1913, she was a mistress of the novelist H.G. Wells.[2] In 1916 she married John Francis Stanley Russell, 2nd Earl Russell, elder brother of Bertrand Russell. The marriage ended in acrimony, with Elizabeth fleeing to the United States and the couple separating in 1919, although they never divorced. In 1920, she embarked on an affair with Alexander Stuart Frere Reeves (1892–1984), a British publisher nearly 30 years her junior; he later married and named his only daughter Elizabeth in her honour.[5]

After leaving Germany, she lived, variously, in London, France and Switzerland.[6] In 1939, on the outbreak of the Second World War, she returned to the United States, where she died of influenza at the Riverside Infirmary, Charleston, South Carolina, on 9 February 1941, aged 74. She was cremated at Fort Lincoln cemetery, Maryland and in 1947 her ashes were mingled with her brother Sydney's in the churchyard of St Margaret's, Tylers Green, Penn, Buckinghamshire.[2] The Latin inscription on her tombstone reads, parva sed apta (small but apt), alluding to her short stature.[6]

Arnim would later refer to her domineering first husband by the Biblical title the "Man of Wrath" and writing became her refuge from what turned out to be an incompatible marriage. Arnim's husband had increasing debts and was eventually sent to prison for fraud. This was when she created her pen name "Elizabeth" and launched her career as a writer by publishing her semi-autobiographical, brooding, yet satirical Elizabeth and Her German Garden (1898). Detailing her struggles both to create a garden on the estate and her attempts to integrate into German high-class Junker society, it was such a success that it was reprinted twenty times in its first year.[7] A bitter-sweet memoir and companion to it was The Solitary Summer (1899). Other works, such as the The Benefactress (1902), Vera (1921), and Love (1925), were also semi-autobiographical. Other titles dealing with protest against domineering Junkerdom and witty observations of life in provincial Germany were to follow, including The Princess Priscilla's Fortnight (1905) and Fraulein Schmidt and Mr Anstruther (1907). She would sign her twenty or so books, after the first, initially as "by the author of Elizabeth and Her German Garden" and later simply "By Elizabeth".

Although she never wrote a traditional autobiography, 'All the Dogs of My Life', her 1936 account of her love for her pets, contains many glimpses of the glittering social circle of which she was part.[8] 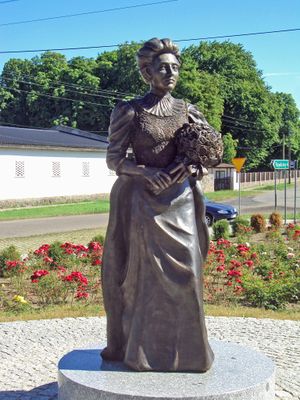 Her 1921 novel, Vera, a dark tragi-comedy drawing on her disastrous marriage to Earl Russell, was her most critically acclaimed work. It was described by John Middleton Murray as "Wuthering Heights by Jane Austen".[9]

Her 1922 work, The Enchanted April, inspired by a month-long holiday to the Italian Riviera, is perhaps the lightest and most ebullient of her novels and has regularly been adapted for the stage and screen: as a Broadway play in 1925; a 1935 American feature film; an Academy Award-nominated feature film in 1992 (starring Josie Lawrence, Jim Broadbent and Joan Plowright amongst others); a Tony Award-nominated stage play in 2003; a musical play in 2010; and in 2015 a serial on BBC Radio 4.

Terence de Vere White credits The Enchanted April with making the Italian resort of Portofino fashionable.[10] It is also, probably, the most widely-read of all her work, having been a Book-of-the-Month club choice in America upon publication.[10]

Her 1940 novel, Mr. Skeffington, was made into an Academy Award-nominated feature film by Warner Bros. in 1944, starring Bette Davis and Claude Rains; and a 60-minute "Lux Radio Theater" broadcast radio adaptation of the movie on 1 October 1945.

Since 1983, the British publisher Virago has been reprinting her work with new introductions by modern writers, some of which try to claim her as a sort of feminist, [11] although 'The Reader's Encyclopedia' reports that many of her later novels are 'tired exercises'.[12] Perhaps the best example of von Arnim's mordant wit and unusual attitude to life, is provided in one her letters: 'I'm so glad I didn't die on the various occasions I have earnestly wished I might, for I would have missed a lot of lovely weather'.[13] 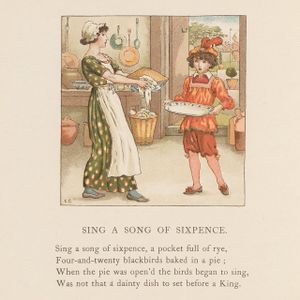 Illustration by Kate Greenaway for April Baby's Book of Tunes, 1900