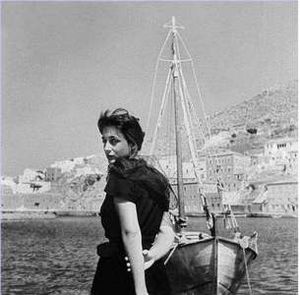 Born in 1926 in the village of Vilia, Attiki, Greece.[1] Her father owned a Greek tavern in Vilia. She had six siblings. Her maternal grandfather was a Captain Stamatis who fought together with Kolokotronis against the Turks in 1821, when the modern Greek democracy was created. In 1928, the family moved to Athens.[citation needed]

In 1941, she was rejected from two theatre schools: the state one (Ethniko) and a private one named for the Greek actress Marika Kotopouli, who recognized Lambeti's talent and hired her. Loukou adopted the professional surname Lambeti and became a female lead actress. She starred in Hanneles Himmelfahrt by Hauptmann. In 1945, she met Marios Ploritis, her future husband, during the filming one of her first films, Adoulotoi sklavoi (1946).[citation needed]

In 1946 Lambeti became one of the actresses that played for the famous modern theatre director Karolos Koun; she was the female lead in the Greek productions of the following plays:

In 1959 she met her American husband, Frederic Wakeman, Sr. She starred in Michael Cacoyannis's Greek masterpieces like Kyriakatiko xypnima (1954), To Koritsi me ta mavra (1956), and To Telefteo psema (1957). She also starred in Kalpiki lira (1955) by George Tzavellas. Lambeti continued her theatrical career, in 1962 came The Heiress, in 1965 as Blanche in A Streetcar Named Desire.

The subsequent years were a fight against cancer. She successfully starred in theatre productions like Thornton Wilder's Hello, Dolly! (1980) and as Sarah in Mark Medoff's Children of a Lesser God (1981), but her health was poor. She died in 1983 from cancer in New York City, aged 57.