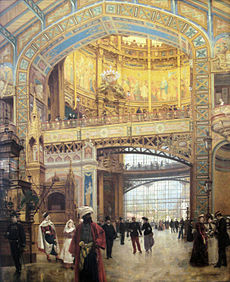 It was held during the year of the 100th anniversary of the storming of the Bastille, an event considered symbolic of the beginning of the French Revolution. The fair included a reconstruction of the Bastille and its surrounding neighborhood, but with the interior courtyard covered with a blue ceiling decorated with fleur-de-lys and used as a ball room and gathering place.[1]

The 1889 Exposition covered a total area of 0.96 km2, including the Champ de Mars, the Trocadéro, the quai d'Orsay, a part of the Seine and the Invalides esplanade. Transport around the Exposition was partly provided by a 3 kilometre (1.9 mi) 600 millimetre (2 ft  0  in) gauge railway by Decauville. It was claimed that the railway carried 6,342,446 visitors in just six months of operation. Some of the locomotives used on this line later saw service on the Chemins de Fer du Calvados.[2]

The main symbol of the Fair was the Eiffel Tower, which served as the entrance arch to the Fair. The 1889 fair was held on the Champ de Mars in Paris, which had been the site of the earlier Paris Universal Exhibition of 1867, and would also be the site of the 1900 exposition. Since the lifts had not been completed when the Exposition opened, the first visitors had to walk up to the second floor platform.[3] Workers had worked through the night the day before the exhibition opened to complete the necessary construction needed to safely allow patrons to set foot upon the structure. When speaking of the dedicated workers, M. Salles, the son-in-law of Eiffel made the statement that "no soldier on the battle field deserved better mention than these humble toilers, who, will never go down in history." No one other than construction personnel were allowed higher than the second floor platform.[3]

An equally significant building constructed for the fair was the Galerie des machines, designed by architect Ferdinand Dutert and engineer Victor Contamin. It was reused at the exposition of 1900 and then destroyed in 1910. At 111 meters, the Galerie (or "Machinery Hall") spanned the longest interior space in the world at the time, using a system of hinged arches (like a series of bridge spans placed not end-to-end but parallel) made of steel or iron. Although often described as being constructed of steel, it is actually made of iron.[4]

There is an extensive description, with illustrations, of the Exposition's two famous buildings in the British journal Engineering (3 May 1889 issue). A follow-up report appears a late issue with this summation:[5]

the exhibition will be famous for four distinctive features. In the first place, for its buildings, especially the Eiffel tower and the Machinery Hall; in the second place, for its Colonial Exhibition, which for the first time brings vividly to the appreciation of the Frenchmen that they are masters of lands beyond the sea; thirdly, it will be remembered for its great collection of war material, the most absorbing subject now-a-days, unfortunately, to governments if not to individuals; and fourthly, it will be remembered, and with good cause by many, for the extraordinary manner in which South American countries are represented.

The 28 June issue of Engineering also mentions a remarkable "Great Model of the Earth" created by Theodore Villard and Charles Cotard. There were unseasonal thunderstorms in Paris during that summer of 1889, causing some distress to the canopies and decoration of the exposition, as reported by the Engineering issues at that time.

The Exhibition included a building by the Paris architect Pierre-Henri Picq. This was an elaborate iron and glass structure decorated with ceramic tiles in a Byzantine-Egyptian-Romanesque style. After the Exposition the building was shipped to Fort de France and reassembled there, the work being completed by 1893. Known as the Schoelcher Library, initially it contained the 10,000 books that Victor Schoelcher had donated to the island. Today it houses over 250,000 books and an ethnographic museum, and stands as a tribute to the man it is named after who led the movement to abolish slavery in Martinique.

Plan of the fair

A "Negro village" (village nègre) where 400 people were displayed constituted the major attraction.[6]

Matching closely the opening day of the Exposition, the Opéra Comique premiered on 14 May 1889 with a work specially composed for that event: Jules Massenet's Esclarmonde (debuting American soprano Sybil Sanderson), attracting and entertaining crowds of visitors for the more than 50 evenings the Exposition lasted.

At the Exposition, the French composer Claude Debussy first heard Javanese gamelan music, performed by an ensemble from Java. This influenced some of his later compositions.[7]

William Stroudley, locomotive superintendent of the London, Brighton and South Coast Railway died whilst at the exhibition, where he was exhibiting one of his locomotives. Heineken received the Grand Prix (English: Grand Prize) at the exposition.

A central attraction in the French section was the Imperial Diamond, at the time the largest brilliant in the world.[8] 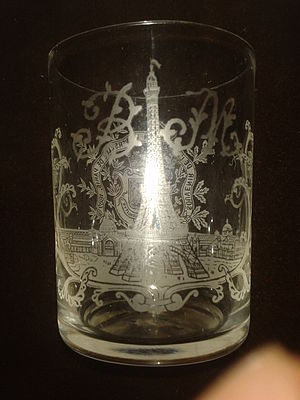