Fosnes is a municipality in Nord-Trøndelag county, Norway. It is part of the Namdalen region. The administrative centre of the municipality is the village of Dun on the island of Jøa. Other villages include Salsnes and Nufsfjord. 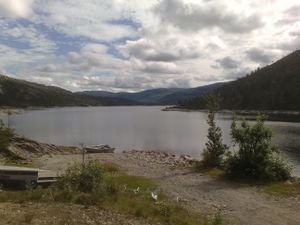 The coat-of-arms is from modern times; they were granted on 13 November 1992. The arms show a black oarlock from a rowing boat on a yellow background. Fosnes is a coastal municipality and rowing boats were the main form of transportation in the former centuries.

The first proposal for arms of Fosnes were taken in 1989, when the council launched a contest to develop arms. Several proposals were received but none was acceptable to or the council, or the Norwegian Heraldic Society, as the proposals were not made according to heraldic rules. Finally the Society proposed the above arms, which were acceptable to the council.[5]

The Church of Norway has one parish (sokn) within the municipality of Fosnes. It is part of the Namdal deanery in the Diocese of Nidaros.