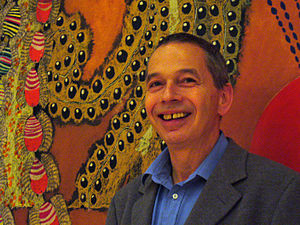 Frank Furedi (born Ferenc Füredi, 3 May 1947, Budapest, Hungary)[1] is emeritus professor of sociology at the University of Kent, United Kingdom. He is well known for his work on sociology of fear, education, therapy culture, paranoid parenting and sociology of knowledge.

A former student radical, he became involved in left-wing politics in the 1970s and emerged as founder and chairman of the Revolutionary Communist Party. In the 1990s he was actively involved in humanist-focused issues, especially campaigns for free speech. Furedi's academic work was initially devoted to a study of imperialism and race relations. His books on the subject include The Mau-Mau War in Perspective, The New Ideology of Imperialism and The Silent War: Imperialism and the Changing Perception of Race. In recent years his work has been oriented towards exploring the sociology of risk and low expectations. Furedi is author of several books on this topic, most recently Wasted: Why Education Isn't Educating (Continuum 2009) and Invitation to Terror: The Expanding Empire of the Unknown (Continuum 2007), an analysis of the impact of terrorism post 9/11. His more recent publications, On Tolerance: A Defence of Moral Independence (Continuum 2011) and Authority: A Sociological Introduction (Cambridge University Press) deal with the inter-related problem of freedom and authority. He is, according to research,[2] the most widely cited sociologist in the UK press.

He lives in Faversham and is the husband of Ann Furedi, the Chief Executive of British Pregnancy Advisory Service, the UK's largest independent abortion provider. He is a supporter of the British Humanist Association.

Furedi's family emigrated from Hungary to Canada after the failed 1956 uprising, and he did his bachelor's degree at McGill University in Montreal. He has lived in Britain since 1969, and completed his M.A. (on African politics) and his Ph.D. (on the Mau Mau Uprising in Kenya[1]) at the School of Oriental and African Studies, London University.[3]

In the 1970s, Furedi co-founded the Revolutionary Communist Party (RCP). The RCP was distinguished by its commitment to theoretical elaboration and hostility to state intervention in social life.

Furedi is associated with the web journal Spiked Online. Furedi maintains that society and universities are undergoing a politically driven 'dumbing down' process which is manifest in society's growing inability to understand and assess the meaning of risk. The rise of the environmental and green movements parallels society's growing obsession with risk. Furedi also attacks the scientific consensus on global warming,[4] and has criticised the prominent role played by science in policy formation.[5] As a humanist educator, he is critical of the attempt to subject schooling to technocratic and instrumentalist policy making.[6]

Furedi frequently appears in the media, expressing his view that Western societies have become obsessed with risk. He writes regularly for Spiked Online. He has also written several books on the subject of risk, offering a counterpoint to the analyses of Anthony Giddens and Ulrich Beck, including Paranoid Parenting, Therapy Culture, and Culture of Fear.

In 2008 he criticised opponents of American vice presidential candidate Sarah Palin on the Spiked website.[7] He claims: "It seems that even fervent advocates of women’s rights will adopt outdated and chauvinistic moral rhetoric when targeting a woman they do not like."

In 2008 he co-authored a book with Jennie Bristow published by the think tank Civitas titled Licensed to Hug: How Child Protection Policies Are Poisoning the Relationship Between the Generations and Damaging the Voluntary Sector,[8] arguing that the growth of police vetting (see Criminal Records Bureau) has created a sense of mistrust and advocating a more common-sense approach to adult/child relations, based on the assumption that the vast majority of adults can be relied on to help and support children, and that the healthy interaction between generations enriches children's lives.

Critics of Furedi are drawn from a wide spectrum of left and progressive opinion and have consistently focused on what they claim to be the cultish, self-serving and anti-democratic nature of the organizations with which he has been associated. The green journalist George Monbiot has accused him of overseeing crypto-Trotskyist entryism designed to insert ex-RCPers into positions of cultural and media influence, where they pursue an extreme pro-technology right-wing libertarian agenda.[9] The atheist journalist and pro-social equality campaigner Nick Cohen has described the RCP as a "weird cult"[10] whose Leninist discipline, disruptive behaviour and selfish publicity-seeking have remained unaltered during the various tactical shifts in the face it presents to the wider world.[11] Anti-Furedi bloggers have claimed that he sees himself as "the Lenin de nos jours" (French for "of our day"),[12] and referred to movements associated with him as the "Continuity RCP"[13] (a play on Continuity IRA).

Furedi and his admirers in the former RCP have dismissed these accusations as dishonest, cowardly and McCarthyite and characterize their critics as jealous, small-minded and unable to engage politically or intellectually with the ideas he and they devise and promulgate on a cooperative, non-coercive basis.[14] Moreover, some liberal thinkers are strong admirers of Furedi and the philosopher Mary Warnock has argued that he is "to be respected in the strongest sense, indeed greatly admired" for his exposure of hypocrisy and intolerance in contemporary culture.[15]