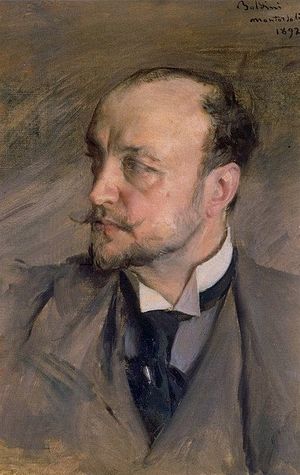 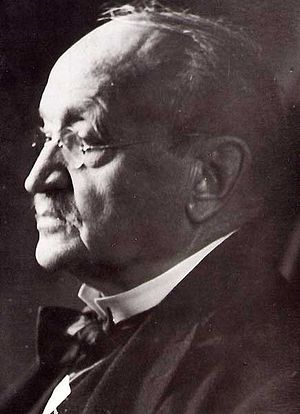 Giovanni Boldini (31 December 1842 in Ferrara, Italy – 11 July 1931 in Paris, France) was an Italian genre and portrait painter. According to a 1933 article in Time magazine, he was known as the "Master of Swish" because of his flowing style of painting.[1]

Boldini was born in Ferrara, the son of a painter of religious subjects, and in 1862 went to Florence for six years to study and pursue painting. He only infrequently attended classes at the Academy of Fine Arts, but in Florence, met other realist painters known as the Macchiaioli, who were Italian precursors to Impressionism. Their influence is seen in Boldini's landscapes which show his spontaneous response to nature, although it is for his portraits that he became best known.

Moving to London, Boldini attained success as a portraitist. He completed portraits of premier members of society including Lady Holland and the Duchess of Westminster.[2] From 1872 he lived in Paris, where he became a friend of Edgar Degas. He also became the most fashionable portrait painter in Paris in the late 19th century, with a dashing style of painting which shows some Macchiaioli influence and the style reminds us the work of younger artists, such as John Singer Sargent and Paul Helleu. He was nominated commissioner of the Italian section of the Paris Exposition in 1889, and received the Légion d'honneur for this appointment.

A Boldini portrait of his former muse Marthe de Florian, a French actress, was discovered in a Paris flat in late 2010, hidden away from view on the premises that were unvisited for 70 years. The portrait has never been listed, exhibited or published and the flat belonged to de Florian's granddaughter who went to live in the South of France at the outbreak[3] of the Second World War and never returned.[4] A love-note and a biographical reference to the work painted in 1888, when the actress was 24, cemented its authenticity. The full length portrait of the lady in the same clothing and accessories, but less provocative, hangs in the New Orleans Museum of Art.

Giovanni Boldini is a character in the ballet Franca Florio, regina di Palermo, written in 2007 by the Italian composer Lorenzo Ferrero, which depicts the story of Donna Franca, a famous Sicilian aristocrat whose exceptional beauty inspired him and many other artists, musicians, poets and emperors during the Belle Époque.

There is a portrait of a family by this painter in the Gulbenkian Art Museum in Lisbon,Portugal.