From Infogalactic: the planetary knowledge core
Jump to: navigation, search
File:Firestone gates.jpg
The gates and part of the exterior railings of the former Firestone factory, all that remains of the demolished buildings.
File:Coty Cosmetics Factory, Great West Road, Brentford, 20050123.jpg
The frontage of the Coty Cosmetics factory on the Golden Mile portion of the Great West Road, Brentford. Designed by Wallis, Gilbert and Partners. 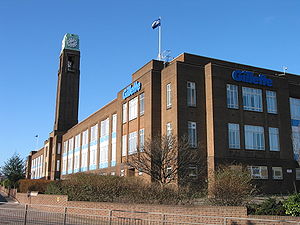 The Gillette Factory on the Golden Mile
File:Pyrene Building (now Westlink House), frontage, Great West Road, Brentford, 20050123.jpg
The frontage of the Pyrene Building on the Golden Mile portion of the Great West Road, Brentford. Designed by Wallis, Gilbert and Partners.
File:Former Currys HQ and factory.jpg
The restored frontage of the former Currys office building, now occupied by JCDecaux.
File:Wallis House Brentford.JPG
Wallis House, originally designed by Wallis, Gilbert and Partners, and in 2008 the conversion to residential development was designed by Assael Architecture.

The Golden Mile is the name given to a stretch of the Great West Road north of Brentford running west from the western boundary of Chiswick in London, United Kingdom.

It was so called due to the concentration of industry along this short stretch of road. This section of the Great West Road was opened in 1925 in order to bypass the notoriously congested Brentford High Street and several factories of architectural merit were rapidly built along the road to take advantage of both the good communications it provided, and the easy availability of land for new buildings. Many examples of the Art Deco architecture remain. However, no commercial buildings could be built further west along the Great West Road (A4) after Syon Lane (Gillette Corner) as the land was owned by the Church Commissioners. Syon Lane railway station was built especially for the workers at these various factories. Land for the Great West Road was compulsorily purchased. It seems likely that housing was dictated by the 1923 (and later) Housing Acts which gave house builders incentives to build houses; also the need to have workers living near the factories.

This stretch of road included an illuminated, animated, advertising sign known to many drivers coming into London on the M4 motorway. The sign, showing a bottle of Lucozade emptying into a glass, was on the wall of what was the Lucozade factory, which opened in 1953 and was demolished in late 2004. The sign was removed to Gunnersbury Park Museum in September 2004 after a brief campaign to preserve it in situ. The sign has now returned to its position next to the M4 elevated section, continuing to urge commuters to augment their energy levels whilst stuck in a line of traffic. This current Lucozade sign is a replica, the original is still in crates at Gunnersbury Museum. Another memorable animated signage was of a female diver advertising Jantzen swimwear. One of the most beautiful single-storey deco buildings belonged to the Firestone Tyre Factory - painted entirely in white - which was controversially demolished one Sunday just a day before a preservation order was to be placed on it. Only the white railings at the front remain. It is now the site of the West Cross Business Centre.