The Goliad massacre, set in the town of Goliad on March 27,1836, was a killing of Republic of the Texas soldier-prisoners and their commander, James Fannin, during the Texas Revolution by the Mexican Army under orders from General and President of Mexico Antonio Lopez de Santa Anna. Despite the protests for clemency by General José de Urrea, the massacre was reluctantly carried out by Lt. Colonel José Nicolás de la Portilla

After Santa Anna learned that a force of Texas rebels were heading toward Matamoros in the Matamoros Expedition, he sent General Urrea to make his way north to Matamoros and then to march north along the coast of Texas to stop the Texans.[1] Urrea arrived in Matamoros and worked to secure cooperation from the local inhabitants on January 31, 1836.[1] Meanwhile, Sam Houston had persuaded all but about 70 to 100 men and their leaders, Frank W. Johnson and James Grant, to give up on the expedition and to defend locations in Texas, principally Goliad, Texas.[2] On February 12, 1836, Colonel James Fannin took most of the men to defend Presidio La Bahía at Goliad, which he renamed Fort Defiance.[3]

On February 16, 1836, Urrea crossed the Rio Grande with about 188 cavalry and 205 infantry.[4] He recruited about 200 Tejano volunteers from the area, including some previously sympathetic to the Texans, to join him.[4]

At 3:00 a.m. on February 27, 1836, Urrea's advance patrol surprised Frank W. Johnson and about 45 men, initiating the Battle of San Patricio, where Urrea's force killed 16 and took 24 prisoners.[5] Johnson and four others escaped in the darkness and rejoined Colonel Fannin's command at Goliad where they retold a story, which they first told at a ranch where they took refuge after the escape, that all the prisoners had been executed.[5] Urrea had sent 18 of the prisoners to Matamoros where they were sentenced to death but later released.[5] This news persuaded Fannin to abandon any further attempt to send relief to the Alamo or to try to secure badly needed supplies waiting at Matagorda but to prepare Presidio La Bahía at Goliad for defense from the advancing Mexican Army.[6]

On March 2, at the Battle of Agua Dulce, James Grant was killed, as were about 20 other men under his command.[7][8]

On March 6, the Mexican force under Santa Anna stormed the Alamo and killed the garrison.[9]

On March 14, Colonel William Ward and 200 men, who had been sent to help Captain Amon B. King evacuate colonists at Refugio, were surrounded by Urrea's force. Although Ward and his men fled that night during a blinding rainstorm, the Mexicans caught up to part of Ward's force and killed 18 and captured 31.[10]

Amon King and a group of men were executed on March 16 at Refugio, but some 15 to 18 prisoners were marched to Goliad to serve as blacksmiths or mechanics.[citation needed]

After capturing one of Fannin's messengers with dispatches that told his plan to wait at Goliad but then retreat after King and Ward returned, Urrea ordered the execution of 30 prisoners he decided were mercenaries but freed over 20 others he determined to be Mexicans or colonists so he would not be hindered by taking prisoners along on his advance on Fannin's force.[11]

On March 19, General Urrea had quickly advanced and surrounded 300 men in the Texian Army on the open prairie, near La Bahia (Goliad). The two-day Battle of Coleto ensued, with the Texians holding their own on the first day. However, the Mexicans would receive overwhelming reinforcements and heavy artillery. In this critical predicament, Colonel Fannin and the majority of the men voted to surrender the Texian forces on March 20.[12] Led to believe that they would be released into the United States, they were returned to the fort at Goliad, now their prison.[13]

Albert Clinton Horton and his company had been acting as the advance and rear guards for Fannin's company. Surprised by an overwhelming Mexican force, they were chased off and escaped, however 18 of the group were captured and marched back to Goliad.[14]

The 75 soldiers of William Parsons Miller and the Nashville Battalion were captured on March 20 and marched in on March 23. They were kept separate from the other prisoners, as they had been unarmed and surrendered without a fight.[citation needed]

On March 22, William Ward and the Georgia Battalion (80 men plus Ward) surrendered after escaping from the Battle of Refugio. About 26 men were retained at Victoria as laborers, but 55 of the prisoners were marched into Goliad, on March 25.[15][16]

The Mexicans took the Texians back to Goliad, where they were held as prisoners at Fort Defiance (Presidio La Bahia). The Texans thought they would likely be set free in a few weeks. General Urrea departed Goliad, leaving command to Colonel José Nicolás de la Portilla. Urrea wrote to Santa Anna to ask for clemency for the Texians.[17] Under a decree passed by the Mexican Congress on December 30 of the previous year, armed foreigners taken in combat were to be treated as pirates and executed. Urrea wrote in his diary that he "...wished to elude these orders as far as possible without compromising my personal responsibility." Santa Anna responded to this entreaty by repeatedly ordering Urrea to comply with the law and execute the prisoners.[17] He also had a similar order sent directly to the "Officer Commanding the Post of Goliad". This order was received by Portilla on March 26, who decided it was his duty to comply despite receiving a countermanding order from Urrea later that same day.[13][18]

The next day, Palm Sunday, March 27, 1836, Colonel Portilla had between 425 and 445 Texians marched out of Fort Defiance in three columns on the Bexar Road, San Patricio Road, and the Victoria Road, between two rows of Mexican soldiers; they were shot point blank killed, and any survivors were clubbed and knifed to death.[13][19]

Forty Texians were unable to walk. Thirty-nine were killed inside the fort under the direction of Captain Carolino Huerta of the Tres Villas battalion, with Colonel Garay saving one, Dr. Jack Shackelford. Colonel Fannin was the last to be executed, after seeing his men executed. Age 32, he was taken by Mexican soldiers to the courtyard in front of the chapel, blindfolded, and seated in a chair (due to his leg wound from the battle). He made three requests: that his personal possessions be sent to his family, to be shot in the heart and not the face, and to be given a Christian burial.[20] The soldiers took his belongings, shot him in the face, and burned his body along with the other Texians who died that day.[20][21]

The entire Texian force was killed, except for 28 men who feigned death and escaped. Among these was Herman Ehrenberg, who later wrote an account of the massacre.[22] Another person who survived was William Lockhart Hunter.[citation needed]

Due to the intervention of Francita Alavez (the "Angel of Goliad") and the courageous effort of Colonel Francisco Garay, 20 more men were spared to act as doctors, interpreters, or workers,[23] including Dr. Shackelford.[20]

Also spared were the 75 soldiers of William Parsons Miller and the Nashville Battalion. They were later marched to Matamoros.[24]

Spared men were given white arm bands, and while wearing them could walk about freely. They were advised not to take off the arm band, since Mexican troops were hunting for those few who had escaped from Coleto, Victoria, and the massacre itself.[citation needed] 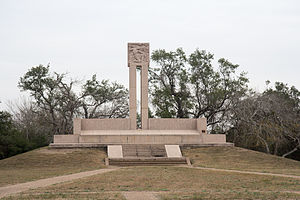 This monument marks the location where the Texans from the Goliad Massacre are buried.

After the executions, the Texians' bodies were piled and burned.[25] Their charred remains were left in the open, unburied, and exposed to vultures and coyotes.[25] Nearly one month later, word reached La Bahia (Goliad) that General Lopez de Santa Anna had been defeated and surrendered while trying to flee at the Battle of San Jacinto.[26] The Mexican soldiers at La Bahia returned to the funeral pyres and gathered up any visible remains of the Texians and re-burned any evidence of the bodies.[citation needed]

The massive number of Texian prisoner-of-war casualties throughout the Goliad Campaign led to Goliad being called a massacre by Texas-American forces and fueled the frenzy of the Runaway Scrape.

The site of the massacre is now topped by a large monument containing the names of the victims.