From Infogalactic: the planetary knowledge core
Jump to: navigation, search
For a broader coverage related to this topic, see Mass murder. 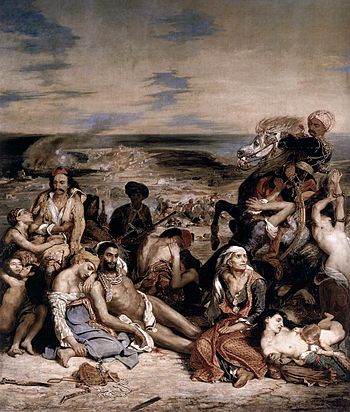 The Chios Massacre refers to a famous incident during the Greek War of Independence in 1822.[1] 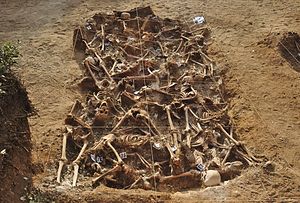 Twenty-six republicans were assassinated by Franco's Nationalists at the beginning of the Spanish Civil War, between August and September of 1936. This mass grave is placed at the small town named as Estépar, in Northern Spain. The excavation occurred in July–August of 2014. 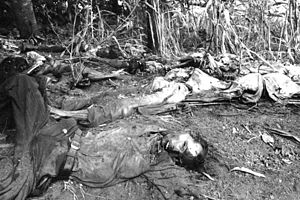 A massacre is a specific incident which involves the killing of people, although not necessarily a crime against humanity.[2]

Origin and history of term

The first recorded use in English of the word massacre to label an event is Marlowe's (circa 1600), The massacre at Paris[3] (a reference to the St. Bartholomew's Day massacre). The word ultimately derives from Middle Low German *matskelen meaning to slaughter.

Massacre is also a verb that means to kill (people or, less commonly, animals) in numbers, especially brutally and indiscriminately. The first known use for this meaning was in 1588.[4]

The term is also used metaphorically for events that do not involve deaths, such as the Saturday Night Massacre—the dismissals and resignations of political appointees during Richard Nixon's Watergate scandal.

Robert Melson's "basic working definition," reads, "by massacre we shall mean the intentional killing by political actors of a significant number of relatively defenseless people... the motives for massacre need not be rational in order for the killings to be intentional... Mass killings can be carried out for various reasons, including a response to false rumors... political massacre... should be distinguished from criminal or pathological mass killings... as political bodies we of course include the state and its agencies, but also nonstate actors..."[5]

Mark Levene defines massacre historically as involving the murder of more than one individual, within an outrageous moral deficiency: "Although it is not possible to set unalterable rules about when multiple murders become massacres. Equally important is that massacres are not carried out by individuals, but by groups... the use of superior, even overwhelming force..." Levene excludes "legal, or even some quasi-legal, mass executions." He also points out that it is "...most often ... when the act is outside the normal moral bounds of the society witnessing it... In any war ... this killing is often acceptable."[6]