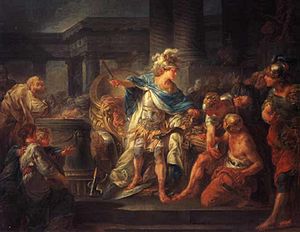 The Gordian Knot is a legend of Phrygian Gordium associated with Alexander the Great. It is often used as a metaphor for an intractable problem (disentangling an "impossible" knot) solved easily by loophole or "thinking outside the box" ("cutting the Gordian knot"):

The Gordian Knot of it he will unloose,

At one time the Phrygians were without a king. An oracle at Telmissus (the ancient capital of Phrygia) decreed that the next man to enter the city driving an ox-cart should become their king. A peasant farmer named Gordias drove into town on an ox-cart. His position had also been predicted earlier by an eagle landing on his cart, a sign to him from the gods, and, on entering the city, Gordias was declared king. Out of gratitude, his son Midas dedicated the ox-cart[1] to the Phrygian god Sabazios (whom the Greeks identified with Zeus) and tied it to a post with an intricate knot of cornel (Cornus mas) bark. The ox-cart[2] still stood in the palace of the former kings of Phrygia at Gordium in the fourth century BC when Alexander arrived, at which point Phrygia had been reduced to a satrapy, or province, of the Persian Empire.

Several themes of myth converged on the chariot, as Robin Lane Fox remarks:[3] Midas was connected in legend with Alexander's native Macedonia, where the lowland "Gardens of Midas" still bore his name, and the Phrygian tribes were rightly remembered as having once dwelt in Macedonia. So, in 333 BC, while wintering at Gordium, Alexander the Great attempted to untie the knot. When he could not find the end to the knot to unbind it, he sliced it in half with a stroke of his sword, producing the required ends (the so-called "Alexandrian solution").[4] However, another solution is presented by Aristobulus, which indicates "he unfastened it quite easily by removing the pin which secured the yoke to the pole of the chariot, then pulling out the yoke itself."[5] That night there was a violent thunderstorm. Alexander's prophet Aristander took this as a sign that Zeus was pleased and would grant Alexander many victories. Once Alexander had sliced the knot with a sword-stroke, his biographers claimed in retrospect[6] that an oracle further prophesied that the one to untie the knot would become the king of Asia.[7]

Status of the legend

While sources from antiquity agree that Alexander was confronted with the challenge of the knot, the means by which he solved the problem are disputed. Both Plutarch and Arrian relate that according to Aristobulus,[9] Alexander pulled the knot out of its pole pin, exposing the two ends of the cord and allowing him to untie the knot without having to cut through it. Some classical scholars regard this as more plausible than the popular account.[10]

Alexander later went on to conquer Asia as far as the Indus and the Oxus thus, for Callisthenes, fulfilling the prophecy.

The knot may have been a religious knot-cipher guarded by Gordian/Midas's priests and priestesses. Robert Graves suggested that it may have symbolized the ineffable name of Dionysus that, knotted like a cipher, would have been passed on through generations of priests and revealed only to the kings of Phrygia.[11]

Unlike fable, true myth has few completely arbitrary elements. This myth taken as a whole seems designed to confer legitimacy to dynastic change in this central Anatolian kingdom: thus Alexander's "brutal cutting of the knot... ended an ancient dispensation."[12] The ox-cart suggests a longer voyage, rather than a local journey, perhaps linking Gordias/Midas with an attested origin-myth in Macedon, of which Alexander is most likely to have been aware.[13] Based on the myth, the new dynasty was not immemorially ancient, but had widely remembered origins in a local, but non-priestly "outsider" class, represented by Greek reports equally as an eponymous peasant "Gordias"[14] or the locally-attested, authentically Phrygian "Midas"[15] in his ox-cart.[16] Other Greek myths legitimize dynasties by right of conquest (compare Cadmus), but the legitimizing oracle stressed in this myth suggests that the previous dynasty was a race of priest-kings allied to the unidentified oracle deity.

Use of the phrase