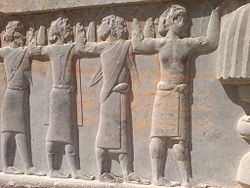 Some of Achaemenid empire satraps

Satraps were the governors of the provinces of the ancient Median and Achaemenid (Persian) Empires and in several of their successors, such as the Sasanian Empire and the Hellenistic empires.

The word satrap is also often used metaphorically in modern literature to refer to world leaders or governors who are heavily influenced by larger world superpowers or hegemonies and act as their surrogates.[1]

The word "satrap" originates ultimately (via Ancient Greek and Latin) from Old Persian xšaçapāvan ("protector of the province"), Sanskrit kshatrapam (क्षत्रपम्) or kshtrapa, from xšaça ("realm" or "province") and pāvan ("protector"). In Greek, the word was rendered as satrápēs (σατράπης)—which later borrowed into Latin as satrapes—from a Western Iranian cognate xšaθrapā(van). In modern Persian the descendant of xšaθrapāvan is shahrbān (شهربان), but the components have undergone semantic shift so the word now means "town keeper" (shahr [شهر] meaning "town" + bān [بان] meaning "keeper").

The first large scale use of satrapies, or provinces, originates from the conception of the First Persian Empire under Cyrus the Great, beginning at around 530 BC. However, provincial organization originated during the Median era from at least 648 BC.

Up to the time of the conquest of Media by Cyrus the Great, emperors ruled the conquered lands, through client kings and governors. The chief difference was that in Persian culture the concept of kingship was indivisible from divinity: divine authority validated the divine right of kings.The twenty-six satraps established by Cyrus were never kings, but viceroys ruling in the king's name, although in political reality many grabbed any chance to carve themselves an independent power base. Darius the Great gave the satrapies a definitive organization, increased their number to thirty-six and fixed their annual tribute (Behistun inscription)

The satrap was in charge of the land that he owned as an administrator, and found himself surrounded by an all-but-royal court; he collected the taxes, controlled the local officials and the subject tribes and cities, and was the supreme judge of the province before whose "chair" (Nehemiah 3:7) every civil and criminal case could be brought. He was responsible for the safety of the roads (cf. Xenophon), and had to put down brigands and rebels.

He was assisted by a council of Persians, to which also provincials were admitted; and was controlled by a royal secretary and by emissaries of the king, especially the "eye of the king" who made an annual inspection and exercised permanent control.

There were further checks on the power of each satrap: besides his secretarial scribe, his chief financial official (Old Persian ganzabara) and the general in charge of the regular army of his province and of the fortresses were independent of him and reported directly to the shah, periodically, in person. But the satrap was allowed to have troops in his own service.

The last great rebellions were put down by Artaxerxes III.

The satrapic administration and title were retained—even for Greco-Macedonian incumbents—by Alexander the Great, who conquered the Achaemenid Empire, and by his successors, the Diadochi (and their dynasties) who carved it up, especially in the Seleucid Empire, where the satrap generally was designated as strategos; but their provinces were much smaller than under the Persians. They would ultimately be replaced by conquering empires, especially the Parthians.

In the Parthian Empire, the king's power rested on the support of noble families who ruled large estates, and supplied soldiers and tribute to the king. City-states within the empire enjoyed a degree of self-government, and paid tribute to the king. Administration of the Sassanid Empire was considerably more centralized than that of the Parthian Empire; the semi-independent kingdoms and self-governing city states of the Parthian Empire was replaced with a system of "royal cities" which served as the seats of centrally appointed governors called shahrabs as well as the location of military garrisons. Shahrabs ruled both the city and the surrounding rural districts. Exceptionally, the East Roman Empire also adopted the title "satrap" for the semi-autonomous princes that governed one of its Armenian provinces, the Satrapiae.

The Western Satraps or Kshatrapas (35-405 AD) were Saka rulers in the western and central part of the Sindh region of Pakistan, and the Saurashtra and Malwa regions of western India. They were contemporaneous with the Kushans who ruled the northern part of the subcontinent from the area of Peshawar and were possibly their overlords, and with the Satavahana (Andhra) who ruled in central India to their south and east and the Kushan state to their immediate west.