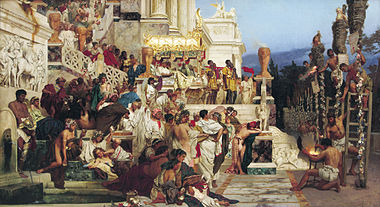 The Torches of Nero, by Henryk Siemiradzki. According to Tacitus, Nero targeted Christians as those responsible for the fire.

The Great Fire of Rome was an urban fire that started on the night between 18 and 19 July in the year 64 AD. It caused widespread devastation, before being brought under control after six days. Differing accounts either blame Emperor Nero for initiating the fire or credit him with organizing measures to contain it and provide relief for refugees. In response to the accusations that he was responsible for the fire Nero blamed the devastation on the Christian community in the city, initiating the empire's first persecution against the Christians.[1]

The varying historical accounts of the event come from three secondary sources—Cassius Dio, Suetonius and Tacitus. The primary accounts, which possibly included histories written by Fabius Rusticus, Cluvius Rufus and Pliny the Elder, did not survive. At least five separate stories circulated regarding Nero and the fire:

Outbreak and progress of fire

Tacitus describes the fire as beginning in shops where flammable goods were stored, in the region of the Circus neighboring the Caelian and Palatine hills of Rome. The night was a windy one and the flames rapidly spread along the full length of the Circus. The fire expanded through an area of narrow, twisting streets and closely located apartment blocks. In this lower area of Rome there were no large buildings such as temples, or open areas of ground, to impede the conflagration. It then spread along the Palatine and Caelian slopes.

The population fled first to areas unaffected by the fire and then to the open fields and rural roads outside the city. Looters and arsonists were reported to have spread the flames by throwing torches or, acting in groups, to have hindered measures being made to halt or slow the progress of the flames. Tacitus surmises that some may have acted under orders or that they may simply have wanted to plunder unhindered.

According to Tacitus, Nero was away from Rome, in Antium, when the fire broke out. He returned to the city and took measures to bring in food supplies and open gardens and public buildings to accommodate refugees. After six days the organized clearing of built-up areas brought the conflagration to a halt before it reached the Esquiline Hill. There was a further outbreak in the Aemilian district, involving the destruction of temples and arcades but less loss of life. However the fire was now under control. Of Rome's 14 districts, 3 were completely devastated and only 4 completely escaped damage.

Modern scholars[who?] believe that Nero probably did not cause the fire. It is postulated that the fire had been intentionally started to create room for Nero's Domus Aurea, but the fire started 1 km (0.6 miles) away from the site where this palace would later be built, on the other side of the Palatine Hill. Moreover, the fire destroyed parts of Nero's own palace, the Domus Transitoria. It seems unlikely that Nero wanted to destroy this palace since he actually salvaged some of the marble decoration and integrated it into the new Domus Aurea. Even the paintings and wall decorations of the new palace were similar to the ones that had been burned. Last, the fire started just two days after a full moon, a time that, it is presumed, would not have been chosen by arsonists who would not have wished to be observed.[7]