His most important surviving work is a set of biographies of 12 successive Roman rulers, from Julius Caesar to Domitian, entitled De vita Caesarum. Other works by Suetonius concerned the daily life of Rome, politics, oratory, and the lives of famous writers, including poets, historians, and grammarians. A few of these books have partially survived, but many have been lost.

Gaius Suetonius Tranquillus was probably born about AD 69, a date deduced from his remarks describing himself as a "young man" 20 years after Nero's death. His place of birth is disputed, but most scholars place it in Hippo Regius, a small north African town in Numidia, in modern-day Algeria.[3] It is certain that Suetonius came from a family of moderate social position, that his father, Suetonius Laetus,[4] was a tribune belonging to the equestrian order (tribunus angusticlavius) in Legio XIII Gemina, and that Suetonius was educated when schools of rhetoric flourished in Rome.

Suetonius was a close friend of senator and letter-writer Pliny the Younger. Pliny describes him as "quiet and studious, a man dedicated to writing." Pliny helped him buy a small property and interceded with the Emperor Trajan to grant Suetonius immunities usually granted to a father of three, the ius trium liberorum, because his marriage was childless.[5] Through Pliny, Suetonius came into favour with Trajan and Hadrian. Suetonius may have served on Pliny’s staff when Pliny was Proconsul of Bithynia and Pontus (northern Asia Minor) between 110 and 112. Under Trajan he served as secretary of studies (precise functions are uncertain) and director of Imperial archives. Under Hadrian, he became the Emperor's secretary. But Hadrian later dismissed Suetonius for the latter's alleged affair with the empress Vibia Sabina.[6][7] 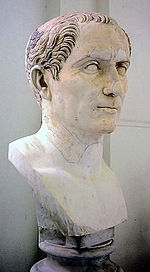 A bust of Gaius Julius Caesar

He is mainly remembered as the author of De Vita Caesarum—translated as The Life of the Caesars although a more common English title is The Lives of the Twelve Caesars or simply The Twelve Caesars—his only extant work except for the brief biographies and other fragments noted below. The Twelve Caesars, probably written in Hadrian's time, is a collective biography of the Roman Empire's first leaders, Julius Caesar (the first few chapters are missing), Augustus, Tiberius, Caligula, Claudius, Nero, Galba, Otho, Vitellius, Vespasian, Titus and Domitian. The book was dedicated to his friend Gaius Septicius Clarus, a prefect of the Praetorian Guard in 119.[8] The work tells the tale of each Caesar's life according to a set formula: the descriptions of appearance, omens, family history, quotes, and then a history are given in a consistent order for each Caesar. He recorded the earliest accounts of Julius Caesar's epileptic seizures.

The two last works were written in Greek. They apparently survive in part in the form of extracts in later Greek glossaries.

The following list of lost works of Suetonius is taken from the foreword written by Robert Graves in his translation of the Twelve Caesars.[9]

The introduction to the Loeb edition of Suetonius, translated by J. C. Rolfe, with an introduction by K. R. Bradley, references the Suda with the following titles:

The volume adds other titles not testified within the Suda.

Two other titles may also be collections of some of the aforelisted: