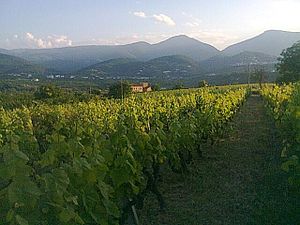 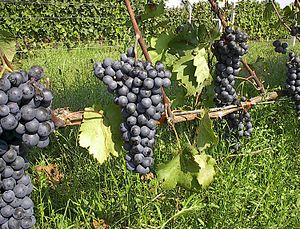 Greece is one of the oldest wine-producing regions in the world. The earliest evidence of Greek wine has been dated to 6,500 years ago[1][2] where wine was produced on a household or communal basis. In ancient times, as trade in wine became extensive, it was transported from end to end of the Mediterranean; Greek wine had especially high prestige in Italy under the Roman Empire. In the medieval period, wines exported from Crete, Monemvasia and other Greek ports fetched high prices in northern Europe. 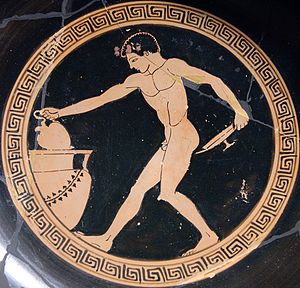 Wine boy at a symposium

The origins of wine-making in Greece go back 6,500 years[3][4] and evidence suggesting wine production confirm that Greece is home to the second oldest known grape wine remnants discovered in the world[2][3][5] and the world’s earliest evidence of crushed grapes.[3] The spread of Greek civilization and their worship of Dionysus, the god of wine, spread Dionysian cults throughout the Mediterranean areas during the period of 1600 BC to the year 1.[6] Hippocrates used wine for medicinal purposes and readily prescribed it.[6] Greek wines and their varieties were well known and traded throughout the Mediterranean.[6] The Ancient Greeks introduced vines such as Vitis vinifera[6] and made wine in their numerous colonies in Italy,[7] Sicily,[8] southern France,[9] and Spain.[6] The Vitis vinifera grape which thrives in temperate climates near coastal areas with mild winters and dry summers adapted well and flourished in the Northern Mediterranean areas.[6] The most reputable wines of ancient Greece were Chian, Coan, Corcyraean, Cretan, Euboean, Lesbian, Leucadian, Mendaean, Peparethan wine, Rhodian and Thasian.Wine was also important for ancient Macedonia. Two other names may or may not be regional: Bibline wine and Pramnian wine are named in the earliest Greek poetry, but without any reliable geographical details.

In 1937, a Wine Institute was established by the Ministry of Agriculture. During the 1960s, retsina suddenly became the national beverage. With rapidly growing tourism, retsina became associated worldwide with Greece and Greek wine. Greece’s first Cabernet Sauvignon vineyard was planted in 1963. In 1971 and 1972, legislation established appellation laws.[citation needed]

A system of appellations was implemented to assure consumers the origins of their wine purchases. The appellation system categorizes wines as:[10][11][12]

The main wine growing regions of contemporary Greece are:[11][12] 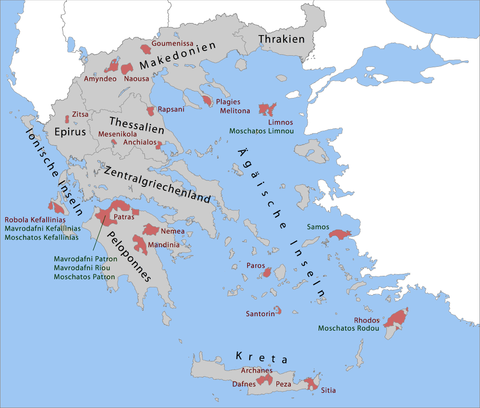 A Nemea wine made from 100% Agiorgitiko.