From Infogalactic: the planetary knowledge core
Jump to: navigation, search
Not to be confused with Horseshoe map. 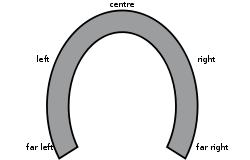 Horseshoe theorists argue that the extreme left and the extreme right are closer to each other than either is to the political center.

The horseshoe theory in political science asserts that rather than the far left and the far right being at opposite and opposing ends of a linear political continuum, they in fact closely resemble one another, much like the ends of a horseshoe. The theory is attributed to French writer Jean-Pierre Faye.[1]

Horseshoe theory competes with the conventional linear left-right continuum system as well as the various multidimensional systems. Proponents of the theory point to similarities between the extreme left and the extreme right.

The earliest use of the term in political theory appears to be from Jean-Pierre Faye's 2002 book Le Siècle des idéologies.[2] Others have attributed the theory as having come from Lipset, Bell and the ‘pluralist school’.[3]

In 2006 the term was used when comparing an alleged resurgent hostility towards Jews, new antisemitism, from both the far left and the far right.[4]

In a 2008 essay Josef Joffe, of Roland Berger Strategy Consultants, one of the largest strategy consultancies in the world, wrote

Will globalization survive the gloom? The creeping revolt against globalization actually preceded the Crash of '08. Everywhere in the West, populism began to show its angry face at mid-decade. The two most dramatic instances were Germany and Austria, where populist parties scored big with a message of isolationism, protectionism and redistribution. In Germany, it was left-wing populism ("Die Linke"); in Austria it was a bunch of right-wing parties that garnered almost 30% in the 2008 election. Left and right together illustrated once more the "horseshoe" theory of modern politics: As the iron is bent backward, the two extremes almost touch.[5]

In 2015, reformist Muslim Maajid Nawaz noted the similarities between a far left group called Hope Not Hate and the McCarthyist methods of the far right.[6]

As the political horseshoe theory attributed to Jean-Pierre Faye highlights, if we travel far-left enough, we find the very same sneering, nasty and reckless bully-boy tactics used by the far-right. The two extremes of the political spectrum end up meeting like a horseshoe, at the top, which to my mind symbolizes totalitarian control from above. In their quest for ideological purity, Stalin and Hitler had more in common than modern neo-Nazis and far-left agitators would care to admit.[7]

Assertions have been made that North Korea is a far-right or fascist state.[8] In The Cleanest Race, Brian Myers purports that North Korea is far-right due to their xenophobia, intense nationalism, and pseudo-religious glorification of former and current leaders and race-based rhetoric. The North Korean regime describes itself as a champion of socialism through its state ideology of Juche, but does not consider itself Communist.[9]