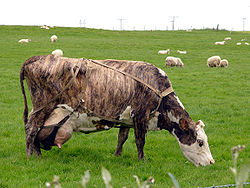 An Icelandic cow, in a pasture with Icelandic sheep

Icelandic cattle are a breed of cattle native to Iceland. Cattle were first brought to the island during the Settlement of Iceland a thousand years ago.[1] Icelandic cows are an especially colorful breed with a wide variety of colours and markings.[2] Icelandic cattle have been genetically isolated for centuries, but are most closely related to breeds in Norway called Blacksided Trender and Nordland Cattle.[3] No cattle are permitted to be imported into Iceland so they have been protected by strict disease-prevention measures.[4]

The Icelandic cow is a dairy breed with a small body-size. About 95% are naturally polled, but the rest are horned. An average cow can produce about 4,500 kg (9,900 lb) of milk per year, with the best animals producing 11,000 kg (24,300 lb). They are housed for about eight months of the year and fed largely on hay, supplemented with cereals. They are outside grazing in the summer, and to prolong the growing season, cabbage, turnips, barley and oats are grown for forage.[1] There are fewer than 30,000 sheep on the island and their milk is used to create a mild, butter-flavoured cheese.[5]

According to a report produced by the Agricultural University of Iceland, it would be more cost-effective to replace Icelandic cattle with Swedish cattle as the latter produce more milk at a lower cost.[6] However, some have argued that Icelandic cattle are part of Iceland's cultural heritage and should not be replaced.[7][8]

The milk from Icelandic cows is used to make skyr.[10]