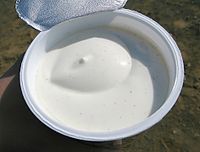 Skyr (Icelandic pronunciation: [ˈscɪːr̥]) is an Icelandic cultured dairy product. It has the consistency of strained yogurt, but a much milder flavor. It has been a part of Icelandic cuisine for over a thousand years.[1] It is traditionally served cold with milk and a topping of sugar.[2]

Skyr was brought from Norway to Iceland more than 1100 years ago, and though the tradition mostly died out in the rest of Scandinavia, it lived on as a part of Icelandic culture. The tradition was also kept alive in parts of Norway. Skyr is mentioned in a number of medieval Icelandic sources, including Egils saga and Grettis saga. It is unclear how similar this was to modern-day skyr, as no detailed descriptions of skyr exist from this period. Culinary historian Hallgerður Gísladóttir has suggested that skyr was known throughout Scandinavia at the time of the settlement of Iceland but eventually forgotten outside of Iceland.[3]

Traditionally, skyr is made with raw milk, however modern skyr is made with pasteurized skimmed milk. A small portion of skyr is added to the warm milk, to introduce the right bacteria, such as Streptococcus salivarius subsp. thermophilus and Lactobacillus delbrueckii subsp. bulgaricus. Rennet is sometimes added as well, and the milk is left to coagulate. The skyr is then strained through fabric to remove the whey (mysa in Icelandic) and the milk solids retained.[citation needed]

Skyr has a slightly sour dairy flavour, with a hint of residual sweetness. Commercial Icelandic manufacturers of skyr have added flavours such as vanilla, berries, etc. common to yoghurt to the final product, to increase its appeal.

Varying slightly between brands, unflavored skyr is roughly 12% protein, 3% carbohydrate, and 0.5% fat. It is high in calcium and vitamins commonly found in milk products.[10]

Skyr may be used in a traditional Icelandic dish called hræringur (meaning "stirred" or "made by stirring") which consists of roughly equal amounts of skyr and porridge. It is often mixed with jam or fruit for a dessert, with prepared fish for dinner, or with cereals for breakfast.[11]

In Norway today, skyr is also used as a term for other variants of cultured milk products – usually byproducts from cheese production.[citation needed] In its traditional use, it was diluted with water when used as a beverage, or mixed with milk and crumbs of flat-bread as a quick meal.