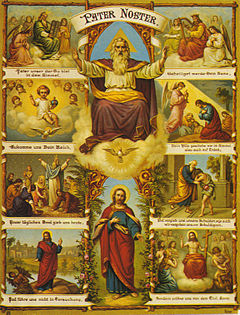 The Incarnation illustrated with scenes from the Old Testaments and the Gospels, with the Trinity in the central column, by Fridolin Leiber, 19th century.

The belief in Incarnation in traditional Christianity is that the second person of the Trinity, also known as God the Son or the Logos (Word), "became flesh" by being conceived in the womb of Mary, also known as the Theotokos (Birth-giver to God) or "Mater Dei" (mother of God). The Incarnation belief, then, is the belief that Jesus Christ is fully God and fully human.

A belief in incarnation is a fundamental theological teaching of orthodox (Nicene) Christianity, based on its understanding of the New Testament. It is a belief that the Son of God, who is the non-created second hypostasis of the triune God, took on a human body and nature and became both man and God. In the Bible its clearest teaching is in John 1:14: "And the Word became flesh, and dwelt among us."[1]

In the Incarnation, as traditionally defined by those Churches that adhere to the Council of Chalcedon, the divine nature of the Son was united but not mixed with human nature[2] in one divine Person, Jesus Christ, who was both "truly God and truly man". This is central to the traditional faith held by most Christians. Alternative views on the subject (See Ebionites and the Gospel of the Hebrews) have been proposed throughout the centuries (see below), but all were rejected by mainstream Christian bodies. An alternative doctrine known as "Oneness" has been espoused among various Pentecostal groups (see below).

The noun incarnation derives from the ecclesiastical Latin verb incarno,[4] itself derived from the prefix in- and ''caro, "flesh", meaning "to make into flesh" or "to be made flesh". The verb incarno does not occur in the Latin Bible but the term is drawn from the Gospel of John "et Verbum caro factum est" "and the Word was made flesh" (John 1:14).

Description and development of the traditional doctrine

While all Christians believed that Jesus was indeed the Son of God,[5] the exact nature of what "Son" meant was contested,[citation needed] together with the precise relationship of the "Father," "Son" and "Holy Spirit" referred to in the New Testament. Debate on this subject occurred during the first four centuries of Christianity, involving Jewish Christians, Gnostics, followers of the Presbyter Arius of Alexandria, and adherents of Pope Alexander of Alexandria, among others.

Eventually, teaching of Alexander, Athanasius, and the other Nicene Fathers, that the Son was consubstantial and coeternal with the Father, were defined as orthodox dogma. All divergent beliefs were defined as heresies. This included Docetism, Arianism, and Sabellianism.

The most widely accepted definitions of the Incarnation and the nature of Jesus were made by the First Council of Nicaea in 325, the Council of Ephesus in 431, and the Council of Chalcedon in 451. These councils declared that Jesus was both fully God: begotten from, but not created by the Father; and fully man: taking his flesh and human nature from the Virgin Mary. These two natures, human and divine, were hypostatically united into the one personhood of Jesus Christ.[6]

The significance of the Incarnation has been extensively discussed throughout Christian history, and is the subject of countless hymns and prayers. For instance, the Divine Liturgy of St. John Chrysostom (c. 400), as used by Eastern Orthodox Christians and Byzantine Catholics, includes this "Hymn to the Only Begotten Son":

O only begotten Son and Word of God,
Who, being immortal,
Deigned for our salvation
To become incarnate
Of the holy Theotokos and ever-virgin Mary,
And became man without change;
You were also crucified,
O Christ our God,
And by death have trampled Death,
Being one of the Holy Trinity,
Glorified with the Father and the Holy Spirit—
Save us!

I exalt Thee, Lord and King,
Only-begotten Son and Word
of the heavenly Father,
immortal by nature, Thou came down by grace
for salvation
and life for all human race; was incarnate
of the holy,
glorious, pure Virgin
Mary, Mother of God
and became man without any change;
was crucified for us.
O Christ, our God,
Who by Thy death trampled and slaughtered our death,
Who are One of the Holy Trinity,
worshipped and honored with
the Father and the Holy Spirit,
have mercy on us all.[8]

The Athanasian (5th century) and Nicene Creeds contain a comprehensive traditional definition of the Incarnation.

The link between the Incarnation and the Atonement within systematic theology is complex. Within traditional models of the Atonement, such as Substitution, Satisfaction or Christus Victor, Christ must be human in order for the Sacrifice of the Cross to be efficacious, for human sins to be "removed" and/or "conquered". In his work The Trinity and the Kingdom of God,[9] Jürgen Moltmann differentiated between what he called a "fortuitous" and a "necessary" Incarnation.[citation needed] The latter gives a soteriological emphasis to the Incarnation: the Son of God became a man so that he could save us from our sins. The former, on the other hand, speaks of the Incarnation as a fulfilment of the Love of God, of his desire to be present and living amidst humanity, to "walk in the garden" with us. Moltmann favours "fortuitous" Incarnation primarily because he feels that to speak of an incarnation of "necessity" is to do an injustice to the life of Christ. Moltmann's work, alongside other systematic theologians, opens up avenues of liberation Christology.[citation needed]

During the Reformation, Michael Servetus taught a theology of the Incarnation that denied trinitarianism, insisting that classical trinitarians were essentially tritheists who had rejected Biblical monotheism in favor of Greek philosophy. The Son of God, Servetus asserted, is not an eternally existing being, but rather the more abstract Logos (a manifestation of the One True God, not a separate person) incarnate. For this reason, Servetus refused to call Christ the "eternal Son of God" preferring "the Son of the eternal God" instead.[10]

In describing Servetus' theology of the Logos, Andrew Dibb (2005) comments: "In Genesis God reveals himself as the creator. In John he reveals that he created by means of the Word, or Logos, Finally, also in John, he shows that this Logos became flesh and 'dwelt among us'. Creation took place by the spoken word, for God said 'Let there be…' The spoken word of Genesis, the Logos of John, and the Christ, are all one and the same."[11]

Condemned by both the Roman Catholic and Protestant churches on account of his heterodox Christology, Servetus was burnt at the stake for heresy in 1553, by the Reformed Protestants in Geneva, Switzerland. The French reformer John Calvin, who asserted he would ensure the death of Servetus if he set foot in Geneva because of his non-Reformed views on the Trinity and the sacrament of baptism, requested he be beheaded as a traitor rather than burned as a heretic, but the authorities insisted on executing Servetus by fire.

Post-Reformation Arians such as William Whiston often held a view of the Incarnation in keeping with the personal pre-existence of Christ. Whiston considered the Incarnation to be of the Logos who had pre-existed as "a Metaphysick existence, in potentia or in the like higher and sublimer Manner in the Father as his Wisdom or Word before his real Creation or Generation.".[12]

Servetus rejected Arianism because it denied Jesus' divinity[13] so it is certain that he would have also rejected Socinianism as a form of Arianism which both rejects that Jesus is God, and, also that Jesus consciously existed before his birth, which most Arian groups accept. Fausto Sozzini and writers of the Polish Brethren such as Samuel Przypkowski, Marcin Czechowic and Johann Ludwig von Wolzogen saw incarnation as being primarily a function of fatherhood. Namely that Christ was literally both 'Son of Man' from his maternal side, and also literally 'Son of God' on his paternal side. The concept of incarnation —"the Word became flesh and dwelt among us"— was understood as the literal word or logos of Ps. 33:6 having been made human by a virgin birth. Sozzini, Przypkowski and other Socinian writers were distinct from Servetus in stating that Jesus having "come down from heaven" was primarily in terms of Mary's miraculous conception and not in Jesus having in any literal sense been in heaven.[14][15] Today the number of churches with Socinian Christology is very small, the main group known for this are the Christadelphians, other groups include CoGGC and CGAF. Modern Socinian or "Biblical Unitarian" writers generally place emphasis on "made flesh" not just meaning "made a body", but incarnation (a term these groups would avoid) requiring Jesus having the temptable and mortal nature of his mother.[16]

In contrast to the traditional view of the Incarnation cited above, adherents of Oneness Pentecostalism believe in the doctrine of Oneness. Although both Oneness and traditional Christianity teach that God is a singular Spirit, Oneness adherents reject the idea that God is a Trinity of persons. Oneness doctrine teaches there is one God who manifests himself in different ways, as opposed to a Trinity, where God is seen as one being consisting of three distinct persons. To a Oneness Pentecostal, Jesus is seen as both fully divine and fully human. The term Father refers to God Himself, who caused the conception of the Son in Mary, thus becoming the father of the child she bore. The term Son refers to the body Jesus dwelt in, and the Holy Ghost refers to the manifestation of God's Spirit inside of and around His people. Thus the Father is not the Son — and this distinction is crucial — but is in the Son as the fullness of his divine nature.[citation needed] Traditional Trinitarians believe that the Son always existed as the eternal second person of the Trinity; Oneness adherents believe that the Son did not come into being until the Incarnation, when the one and only true God took on human flesh for the first, last and only time in history. Oneness doctrine is explained in detail in UPCI minister Dr. David K. Bernard's The Oneness of God.

According to Mormon theology two of the three distinct divine beings of their godhead have perfected, glorified, physical bodies, namely God the Father-Elohim and God the Son-Jehova. The Mormon godhead of Father, the Son, and the Holy Ghost are not said to be one in substance or essence; instead, they remain three separate beings, or personages.

This conception differs from the traditional Christian Trinity in which only one of the three divine persons, God the Son, had an incarnated physical body, and Jehova has not. It also differs totally from the Jewish tradition of ethical monotheism in which elohim (אֱלֹהִים) is a completely different conception.