The name of Iran derives immediately from 3rd-century Sassanian Middle Persian ērān, Pahlavi ʼyrʼn, where it initially meant "of the Iranians",[1] but soon also acquired a geographical connotation in the sense of "(lands inhabited by) Iranians".[1] In both geographic and demonymic senses, ērān is distinguished from its antonymic anērān, meaning "non-Iran(ian)".[1][2]

In the geographic sense, ērān was also distinguished from ērānšahr, the Sassanians' own name for their empire, and which also included territories that were not primarily inhabited by Iranians.[1]

The word ērān is first attested in the inscriptions that accompany the investiture relief of Ardashir I (r. 224–242) at Naqsh-e Rustam.[1] In this bilingual inscription, the king calls himself ardašīr šāhān šāh ērān in Middle Persian, and ardašīr šāhān šāh aryān in Parthian. Both mean "Ardashir, king of kings of the Iranians".[1] The Middle Iranian ērān/aryān are oblique plural forms of gentilic ēr- (Middle Persian) and ary- (Parthian), which in turn both derive from Old Iranian *arya-, meaning "'Aryan,' i.e., 'of the Iranians.'"[1][3] This Old Iranian *arya- is attested as an ethnic designator in Achaemenid inscriptions as Old Persian ariya-, and in Zoroastrianism's Avesta tradition as Avestan airiia-/airya, etc.[4][n 1] It is "very likely"[1] that Ardashir I's use of Middle Iranian ērān/aryān still retained the same meaning as did in Old Iranian, i.e. denoting the people rather than the empire.[1]

The expression "king of kings of the Iranians" found in Ardashir's inscription remained a stock epithet of all the Sassanid kings. Similarly, the inscription "the Mazda-worshipping (mazdayesn) lord Ardashir, king of kings of the Iranians" that appears on Ardashir's coins was likewise adopted by Ardashir's successors. Ardashir's son and immediate successor, Shapur I (r. 240/42–270/72) appended ud anērān "and non-Iranians" to these titles, thus extending his intent to rule non-Iranians as well.[1] In his trilingual inscription at the Ka'ba-i Zartosht, Shapur I also introduces the term *ērānšahr.[n 2] Shapur's inscription includes a list of provinces in his empire, and these include regions in the Caucasus that were not inhabited predominantly by Iranians.[1] An antonymic anērānšahr is attested from thirty years later in the inscriptions of Kartir, a high priest under several Sassanian kings. Kartir's inscription also includes a lists of provinces, but unlike Shapur's considers the provinces in the Caucasus anērānšahr.[1] These two uses may be contrasted with ērānšahr as undestood by the late Sassanid Šahrestānīhā ī Ērānšahr, which is a description of various provincial capitals of the ērānšahr, and includes Africa and Arabia as well.[6][7]

Notwithstanding this inscriptional use of ērān to refer to the Iranian peoples, the use of ērān to refer to the empire (and the antonymic anērān to refer to the Roman territories) is also attested by the early Sassanid period. Both ērān and anērān appear in 3rd century calendrical text written by Mani. The same short form reappears in the names of the towns founded by Sassanid dynasts, for instance in Ērān-xwarrah-šābuhr "Glory of Ērān (of) Shapur". It also appears in the titles of government officers, such as in Ērān-āmārgar "Accountant-General (of) Ērān" or Ērān-dibirbed "Chief Scribe (of) Ērān".[1][8]

Because an equivalent of ērānšahr does not appear in Old Iranian (where it would have been *aryānām xšaθra- or in Old Persian *- xšaça-, "rule, reign, sovereignty"), the term is presumed[1] to have been a Sassanid-era development. In the Greek portion of Shapur's trilingual inscription the word šahr "kingdom" appears as ethnous "nation". For speakers of Greek, the idea of an Iranian ethnous was not new: The mid-5th-century BCE Herodotus (7.62) mentions that the Medes once called themselves Arioi.[5] The 1st century BCE Strabo cites the 3rd-century BCE Eratosthenes for having noted a relationship between the various Iranian peoples and their languages: "[From] beyond the Indus [...] Ariana is extended so as to include some part of Persia, Media, and the north of Bactria and Sogdiana; for these nations speak nearly the same language." (Geography, 15.2.1-15.2.8).[5] Damascius (Dubitationes et solutiones in Platonis Parmenidem, 125ff) quotes the mid-4th-century BCE Eudemus of Rhodes for "the Magi and all those of Iranian (áreion) lineage".[5] The 1st-century BCE Diodorus Siculus (1.94.2) describes Zoroaster as one of the Arianoi.[5]

The terms ērān/ērānšahr had no currency for the Arabic-speaking Caliphs, for whom Arabic al-'ajam und al-furs ("Persia") to refer to Western Iran (i.e. the territory initially captured by the Arabs and approximately corresponding to the present-day country of Iran) had greater traction than indigenous Iranian usage.[9]:327 Moreover, for the Arabs ērān/ērānšahr were tainted by their association with the vanquished Sassanians, for whom being Iranian was also synonymous with being mazdayesn, i.e. Zoroastrian.[9]:327 Accordingly, while the Arabs were generally quite open to Iranian ideas if it suited them, this did not extend to the nationalistic and religious connotations in ērān/ērānšahr, nor to the concomitant contempt of non-Iranians, which by the Islamic era also included Arabs and "Turks".

The rise of the Abbasid Caliphate in the mid-8th century ended the Umayyad policy of Arab supremacy and initiated a revival of Iranian identity.[10] This was encouraged by the transfer of the capital from Syria to Iraq, which had been a capital province in Sassanid, Arsacid and Archaemenid times and was thus perceived to carry an Iranian cultural legacy. Moreover, in several Iranian provinces, the downfall of the Umayyads was accompanied by a rise of de facto autonomous Iranian dynasties in the 9th and 10th centuries: the Taherids, Saffarids and Samanids in eastern Iran and Central Asia, and the Ziyarids, Kakuyids and Buyids in central, southern and western Iran. Each of these dynasties identified themselves as "Iranian",[10] manifested in their invented genealogies, which described them as descendents of pre-Islamic kings, and legends as well as the use of the title of šāhanšāh by the Buyid rulers.[10] These dynasties provided the "men of the pen" (ahl-e qalam), i.e. the literary elite, with an opportunity to revive the idea of Iran.

The best known of this literary elite was Firdausi, whose Shahnameh, completed around 1000 CE, is partly based on Sassanid and earlier oral and literary tradition. In Firdausi's take on the legends, the first man and first king created by Ahura Mazda are the foundations of Iran.[10] At the same time, Iran is portrayed to be under threat from Aniranian peoples, who are driven by envy, fear and other evil demons (dews) of Ahriman to conspire against Iran and its peoples.[10] "Many of the myths surrounding these events, as they appear [in the Shahnameh], were of Sasanid origin, during whose reign political and religious authority become fused and the comprehensive idea of Iran was constructed."[10]

In time, Iranian usage of ērān began to coincide with the dimensions of Arabic al-Furs, such as in the Tarik-e Sistan which divides Ērānšahr into four parts and restricts ērān to only Western Iran, but this was not yet common practice in the early Islamic-era. At that early stage, ērān was still mostly the more general "(lands inhabited by) Iranians" in Iranian usage, occasionally also in the early Sassanian sense in which ērān referred to people, rather than to the state.[1] Notable among these is Farrokh-i Sistani, a contemporary of Firdausi, who also contrasts ērān with 'turan', but—unlike Firdausi—in the sense of "land of the Turanians." The early Sassanian sense is also occasionally found in medieval works by Zoroastrians, who continued to use Middle Persian even for new compositions. The Denkard, a 9th-century work of Zoroastrian tradition, uses ērān to designate Iranians and anērān to designate non-Iranians. The Denkard also uses the phrases ēr deh, plural ērān dehān, to designate lands inhabited by Iranians. The Kar-namag i Ardashir, a 9th-century hagiographic collection of legends related to Ardashir I uses ērān exclusively in connection with titles, i.e. šāh-ī-ērān and ērān-spāhbed (12.16, 15.9), but otherwise calls the country Ērānšahr (3.11, 19; 15.22, etc.).[1] A single instance in the Book of Arda Wiraz (1.4), also preserves the gentilic in ērān dahibed distinct from the geographic Ērānšahr. However, these post-Sassanian instances where ērān referred to people rather than to the state, are rare, and by the early Islamic period the "general designation for the land of the Iranians was [...] by then ērān (also ērān zamīn, šahr-e ērān), and ērānī for its inhabitants."[1] That "Ērān was also generally understood geographically is shown by the formation of the adjective ērānag "Iranian," which is first attested in the Bundahišn and contemporary works."[1]

In the Zoroastrian literature of the medieval period, but apparently also perceived by adherents of other faiths,[9]:328 Iranianness remained (mostly) synonymous with Zoroastrianism. In these texts, other religions are not seen as "unzoroastrian", but as un-Iranian.[9]:328 This is a major theme in the Ayadgar i Zareran 47, where ērīh "Iranianess" is contrasted with an-ērīh, and ēr-mēnišnīh "Iranian virtue" is contrasted with an-ēr-mēnišnīh. The Dadestan i Denig (Dd. 40.1-2) goes further, and recommends death for an Iranian who accepts a non-Iranian religion (dād ī an-ēr-īh).[9]:328 Moreover, these medieval texts elevate the Avesta's mythical Airyanem Vaejah (MP: ērān-wez) to the center of the world (Dd. 20.2), and give it a cosmogonical role, either (PRDd. 46.13) where for all plant life is created, or (GBd. 1a.12) where animal life is created.[9]:327 Elsewhere (WZ 21), it is imagined to be the place where Zoroaster was enlightened. In Denkard III.312, humans are imagined to have first all lived there, until ordered to disperse by Vahman und Sros.[9]:328 This ties in with an explanation given to a Christian by Adurfarnbag when asked why Ohrmazd only sent his religion to Ērānšahr.[9]:328 Not all texts treat Iranianness and Zoroastrianism as synonymous. Denkard III.140, for instance, simply considers Zoroastrians to be the better Iranians.[9]:329

The existence of a cultural concept of "Iranianness" (Irāniyat) is also demonstrated in the trial of Afsin in 840, as recorded by Tabari. Afsin, the hereditary ruler of Oshrusana, on the southern bank of the middle stretch of the Syr Darya, had been charged with propagating Iranian ethno-national sentiment.[10] Afsin acknowledged the existence of a national consciousness (al aʿjamiyya) and his sympathies for it. "This episode clearly reveals not only the presence of a distinct awareness of Iranian cultural identity and the people who actively propagated it, but also of the existence of a concept (al-aʿjamiya or Irāniyat) to convey it."[10] 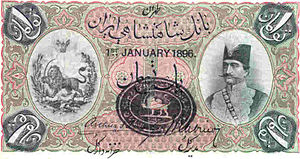 Qajar-era currency bill featuring a depiction of Nasser al-Din Shah Qajar. It states: Issued from the imperial bank of Iran

During the Safavid era (1501–1736), most of the territory of the Sassanid empire regained its political unity, and Safavid kings were assuming the title of "Šāhanšāh-e Irān" (Iran's king of kings).[10] An example is Mofid Bafqi (d. 1679), who makes numerous references to Iran, describing its border and the nostalgia of Iranians who had migrated to India in that era.[10] Even Ottoman sultans, when addressing the Āq Quyunlu and Safavid kings, used such titles as the “king of Iranian lands” or the “sultan of the lands of Iran” or “the king of kings of Iran, the lord of the Persians”.[10] This title, as well as the title of "Šāh-e Irān", was later used by Nader Shah Afshar and Qajar and Pahlavi kings. Since 1935, the name "Iran" has replaced other names of Iran in the western world. Jean Chardin, who travelled in the region between 1673 and 1677, observed that "the Persians, in naming their country, make use of one word, which they indifferently pronounce Iroun, and Iran. [...] These names of Iran and Touran, are frequently to be met with in the ancient histories of Persia; [...] and even to this very day, the king of Persia is call'd Padsha Iran [padshah='king'], and the great vizier, Iran Medary [i.e. medari='facilitator'], the Pole of Persia".[11]

Since the Iranian Revolution of 1979, the official name of the country is "Islamic Republic of Iran."