The Pahlavi dynasty (Persian: دودمان پهلوی‎‎) was the ruling house of Iran from 1925 until 1979, when the monarchy was overthrown and abolished as a result of the Iranian Revolution. The dynasty was founded by Reza Shah Pahlavi in 1925, a former Brigadier-General of the Persian Cossack Brigade, whose reign lasted until 1941 when he was forced to abdicate by the Allies after the Anglo-Soviet invasion. He was succeeded by his son, Mohammad Reza Shah Pahlavi, the last Shah of Iran.

The Pahlavis came to power after Ahmad Shah Qajar, the last ruler of the Qajar dynasty, proved unable to stop British and Soviet encroachment on Iranian sovereignty, had his position extremely weakened by a military coup, and was removed from power by the parliament while in France. The National Assembly, known as the Majlis, convening as a Constituent Assembly on 12 December 1925, deposed the young Ahmad Shah Qajar, and declared Reza Shah the new monarch of the Imperial State of Persia. In 1935, Reza Shah instructed foreign embassies to call Persia by its ancient name, Iran, so the official name became the Imperial State of Iran (Persian: کشور شاهنشاهی ایران‎‎ Keshvar-e Shāhanshāhi-ye Irān) since then.

Faced with growing public discontent and popular rebellion throughout 1978, Mohammad Reza Shah Pahlavi went into exile with his family in January 1979, sparking a series of events that quickly led to the dissolution of the state on 11 February 1979, officially ending the 2,500-year-old tradition of monarchy in Iran.[2] At the death of Mohammad Reza Shah Pahlavi on 27 July 1980, his son Reza Pahlavi became the head of the Pahlavi royal family. 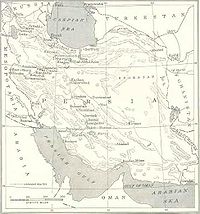 Persia on the eve of Rezā Khan's coup

In 1925, Reza Khan, a former Brigadier-General of the Persian Cossack Brigade, deposed the Qajar dynasty and declared himself king (shah), adopting the dynastic name of Pahlavi. By the mid-1930s, Rezā Shāh's strong secular rule caused dissatisfaction among some groups, particularly the clergy, who opposed his reforms, but the middle and upper-middle class of Iran liked what Rezā Shāh did. In 1935 Rezā Shāh issued a decree asking foreign delegates to use the term Iran in formal correspondence, in accordance with the fact that "Persia" was a term used by Western peoples for the country called "Iran" in Persian. His successor, Mohammad Reza Pahlavi, announced in 1959 that both Persia and Iran were acceptable and could be used interchangeably.

Rezā Shāh tried to avoid involvement with Britain and the Soviet Union. Though many of his development projects required foreign technical expertise, he avoided awarding contracts to British and Soviet companies. Although Britain, through its ownership of the Anglo-Iranian Oil Company, controlled all of Iran's oil resources, Rezā Shāh preferred to obtain technical assistance from Germany, France, Italy and other European countries. This created problems for Iran after 1939, when Germany and Britain became enemies in World War II. Rezā Shāh proclaimed Iran as a neutral country, but Britain insisted that German engineers and technicians in Iran were spies with missions to sabotage British oil facilities in southwestern Iran. Britain demanded that Iran expel all German citizens, but Rezā Shāh refused, claiming this would adversely impact his development projects.

On 13 September 1943 the Allies reassured the Iranians that all foreign troops would leave by 2 March 1946.[3] At the time, the Tudeh Party of Iran, a communist party that was already influential and had parliamentary representation, was becoming increasingly militant, especially in the North. This promoted actions from the side of the government, including attempts of the Iranian armed forces to restore order in the Northern provinces. While the Tudeh headquarters in Tehran were occupied and the Isfahan branch crushed, the Soviet troops present in the Northern parts of the country prevented the Iranian forces from entering. Thus, by November 1945 Azerbaijan had become an autonomous state helped by the Tudeh party.[3][4] This puppet government of the Soviet Union only lasted until November 1946. 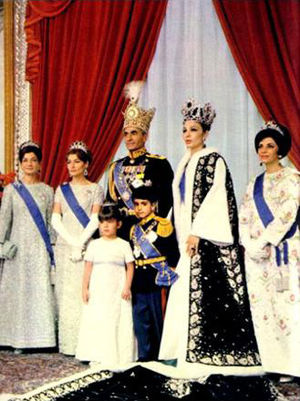 Mohammed Reza Pahlavi and his wife Farah Diba upon his proclamation as the Shâhanshâh of Iran.

Mohammad Reza Pahlavi replaced his father on the throne on 16 September 1941. He wanted to continue the reform policies of his father, but a contest for control of the government soon erupted between him and an older professional politician, the nationalistic Mohammad Mosaddegh.

In 1951, the Majlis (the Parliament of Iran) named Mohammad Mossadegh as new prime minister by a vote of 79–12, who shortly after nationalized the British-owned oil industry (see Abadan Crisis). Mossadegh was opposed by the Shah who feared a resulting oil embargo imposed by the West would leave Iran in economic ruin. The Shah fled Iran but returned when the United Kingdom and United States staged a coup against Mossadegh in August 1953 (see Operation Ajax). Mossadegh was then arrested by pro-Shah army forces.

Major plans to build Iran's infrastructure were undertaken, a new middle class began flourishing and in less than two decades Iran became the indisputable major economic and military power of the Middle East.

Collapse of the dynasty 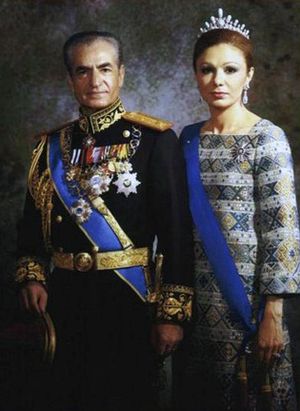 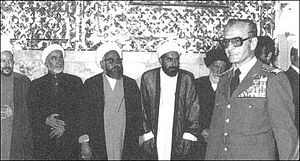 The last Shah of Iran meets clergy. Some of Iranian clergy opposed him while some others supported him as "The only Shiite governor".

The Shah's government suppressed its opponents with the help of Iran's security and intelligence secret police, SAVAK. Such opponents included members of the Communist Tudeh party.

By the mid-1970s, relying on increased oil revenues, Mohammad Reza began a series of even more ambitious and bolder plans for the progress of his country and the march toward the "White Revolution". But his socioeconomic advances increasingly irritated the clergy. Islamic leaders, particularly the exiled cleric Ayatollah Ruhollah Khomeini, were able to focus this discontent with an ideology tied to Islamic principles that called for the overthrow of the Shah and the return to Islamic traditions, called the Islamic revolution. The Pahlavi regime collapsed following widespread uprisings in 1978 and 1979. The Islamic Revolution dissolved the SAVAK and replaced it with the SAVAMA. It was run after the revolution, according to U.S. sources and Iranian exile sources in the US and in Paris, by Gen. Hossein Fardoust, who was deputy chief of SAVAK under Mohammad Reza's reign, and a friend from boyhood of the deposed monarch.

Mohammad Reza fled the country, seeking medical treatment in Egypt, Mexico, the United States, and Panama, and finally resettled with his family in Egypt as a guest of Anwar Sadat. Upon his death his son Crown Prince Reza Pahlavi succeeded him in absentia as heir apparent to the Pahlavi dynasty. Reza Pahlavi and his wife live in the United States in Potomac, Maryland with three daughters.[5]

Under the Qajar dynasty the Persian character of Iran was not very explicit. Although the country was referred to as Persia by westerners, and the dominant language in court and administration was Persian, yet the dichotomy between pure Persian and Turkic elements had remained obvious until 1925. The Pahlavi rule was instrumental in Iran's nationalisation in line with Persian culture and language which, amongst other ways, was achieved through the official ban on the use of the Azeri language. Its use in schools and newspapers was not tolerated. The succeeding regime – the Islamic Republic of Iran – has adopted a more inclusive approach in relation to the use of Azeri language, however the issues as to Iran's largest ethnic minority remain and pose considerable challenges for the unity and territorial integrity of Iran.[6]

Heads of the Pahlavi dynasty

Main article: Human rights in the Imperial State of Iran