An explanation of hemochromatosis

Organs commonly affected by haemochromatosis are the liver, heart, and endocrine glands.[3]

Haemochromatosis may present with the following clinical syndromes:[4]

The causes can be distinguished between primary cases (hereditary or genetically determined) and less frequent secondary cases (acquired during life).[8] People of Celtic (Irish, Scottish, Welsh, Cornish, Breton etc.), English, and Scandinavian origin[9] have a particularly high incidence of whom about 10% are carriers of the C282Y mutation on the HFE gene associated with HLA-A3[which?] and 1% suffer from the condition.

Most types of hereditary haemochromatosis have autosomal recessive inheritance, while type 4 has autosomal dominant inheritance.[14] 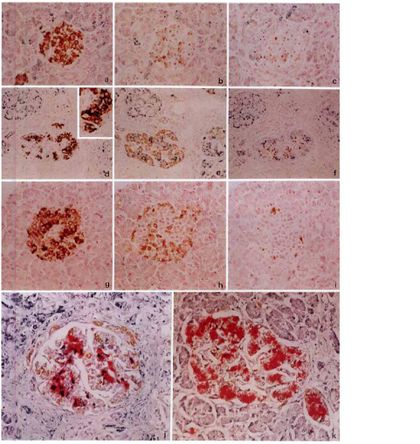 There are several methods available for diagnosing and monitoring iron loading including:

Serum ferritin testing is a low-cost, readily available, and minimally invasive method for assessing body iron stores. However, the major problem with using it as an indicator of iron overload is that it can be elevated in a range of other medical conditions unrelated to iron levels including infection, inflammation, fever, liver disease, renal disease, and cancer. Also, total iron binding capacity may be low, but can also be normal.[15]

Magnetic resonance imaging (MRI) is emerging as a noninvasive alternative to accurately estimate iron deposition levels in the liver as well as heart, joints, and pituitary gland.,[17][18][19][19]

Family members of those with primary haemochromatosis should be screened to determine if they are a carrier or if they could develop the disease. This can allow preventive measures to be taken.

Screening the general population is not recommended.[20]

Routine treatment in an otherwise-healthy person consists of regularly scheduled phlebotomies (bloodletting). When first diagnosed, the phlebotomies may be fairly frequent, perhaps as often as once a week, until iron levels can be brought to within normal range. Once iron and other markers are within the normal range, phlebotomies may be scheduled every other month or every three months depending upon the patient's rate of iron loading. Each session typically draws from 450 to 500 cc.[21]

For those unable to tolerate routine blood draws, there is a chelating agent available for use.[22] The drug deferoxamine binds with iron in the bloodstream and enhances its elimination in urine and faeces. Typical treatment for chronic iron overload requires subcutaneous injection over a period of 8–12 hours daily.[citation needed] Two newer iron chelating drugs that are licensed for use in patients receiving regular blood transfusions to treat thalassaemia (and, thus, who develop iron overload as a result) are deferasirox and deferiprone.[23][24]

Affected individuals over age 40 or who have high serum ferritin levels are at risk for developing cirrhosis. Iron overload increases the risk of hepatocellular carcinoma.[25] This risk is greater in those with cirrhosis but is still present in those without cirrhosis.[25] Significant problems occur in around one in ten.[20]

It is most common in certain European populations (such as the Irish and Norwegians) and occurs in 0.6% of the population.[20] Men with the disease are 24 times more likely to experience symptoms than affected women.[20]

Hereditary haemochromatosis is characterized by an accelerated rate of intestinal iron absorption and progressive iron deposition in various tissues. This typically begins to be expressed in the third to fifth decades of life, but may occur in children. The most common presentation is hepatic (liver) cirrhosis in combination with hypopituitarism, cardiomyopathy, diabetes, arthritis, or hyperpigmentation. Because of the severe sequelae of this disorder if left untreated, and recognizing that treatment is relatively simple, early diagnosis before symptoms or signs appear is important.[16][30]

In general, the term haemosiderosis is used to indicate the pathological effect of iron accumulation in any given organ, which mainly occurs in the form of the iron-storage complex haemosiderin.[31][32] Sometimes, the simpler term siderosis is used instead.

Other definitions distinguishing haemochromatosis or haemosiderosis that are occasionally used include: