Ivan Stepanovich Konev (Russian: Ива́н Степа́нович Ко́нев; 28 December [O.S. 16 December] 1897 – 21 May 1973), was a Soviet military commander, who led Red Army forces on the Eastern Front during World War II, retook much of Eastern Europe from occupation by the Axis Powers, and helped in the capture of Germany's capital, Berlin.

In 1956, as the Commander of Warsaw Pact forces, Konev led the suppression of the Hungarian Revolution by Soviet armoured divisions.

Konev was born on 28 December 1897 into a peasant family near Podosinovets in Vologda Governorate (now Kirov Oblast). He had little formal education and worked as a lumberjack.

In 1916 He was conscripted into the Imperial Russian Army.

When the Russian Revolution broke out in 1917 he was demobilised and returned home, but in 1919 he joined the Bolshevik party and the Red Army, serving as an artilleryman. During the Russian Civil War he served with the Red Army in the Russian Far Eastern Republic. His commander at this time was Kliment Voroshilov, later a close colleague of Joseph Stalin and Commissar for defense. This alliance was the key to Konev's subsequent career.

In 1926 Konev completed advanced officer training courses at the Frunze Military Academy, and between then and 1931 he held a series of progressively more senior commands, becoming head of first the Transbaikal then the North Caucasus Military Districts. In July 1938 he was appointed a corps commander. In 1937 he became a Deputy of the Supreme Soviet and in 1939 a candidate member of the Party Central Committee.

When Nazi Germany attacked the Soviet Union in June 1941, Konev was assigned command of the 19th Army in the Vitebsk region, and waged a series of defensive battles during the Red Army's retreat, first to Smolensk and then to the approaches to Moscow. He commanded the Kalinin Front from October 1941 to August 1942, playing a key role in the fighting around Moscow and the Soviet counter-offensive during the winter of 1941–42. For his role in the successful defense of the Soviet capital, Stalin promoted Konev to Colonel-General. In the summer of 1942 Konev led the Kalinin Front and later the Western front in the battle on the Rzhev salient.[2]

Konev held high commands for the rest of the war. He commanded the Soviet Western Front until February 1943, the North-Western Front February–July 1943, and the 2nd Ukrainian Front from July 1943 (later further the 1st Ukrainian Front) until May 1945.

He participated in the Battle of Kursk, commanding the southern part of the Soviet counter-offensive, the Steppe Front, where he was an active and energetic exponent of maskirovka, the use of military camouflage and deception.[3] Among the maskirovka measures he adopted to achieve tactical surprise were the camouflaging of defence lines and depots; dummy units and supply points; a dummy air defence network; and the use of reconnaissance units to verify the quality of his army's camouflage and deception works. In David Glantz's view, Konev's forces "generated a major portion of the element of surprise".[3]

The result was that the Germans seriously underestimated the strength of the Soviet defences. The commander of 19 Panzer, General G. Schmidt, wrote that "We did not assume that there was even one fourth [the Russian strength] of what we had to encounter".[4]

After the victory at Kursk, Konev's armies retook Belgorod, Odessa, Kharkiv and Kiev. The subsequent Korsun–Shevchenkovsky Offensive led to the Battle of the Korsun–Cherkassy Pocket which took place from 24 January to 16 February 1944. The offensive was part of the Dnieper–Carpathian Offensive. In it, the 1st and 2nd Ukrainian Fronts, commanded, respectively, by Nikolai Vatutin and Konev, trapped German forces of Army Group South in a pocket or cauldron west of the Dnieper river. During weeks of fighting, the two Red Army Fronts tried to eradicate the pocket; the subsequent Korsun battle eliminated the cauldron. According to Milovan Djilas, Konev openly boasted of his killing of thousands of German prisoners of war: "The cavalry finally finished them off. 'We let the Cossacks cut up as long as they wished. They even hacked off the hands of those who raised them to surrender' the Marshal recounted with a smile."[5] 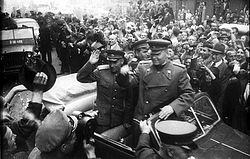 Konev at the liberation of Prague by the Red Army in May 1945.

For his achievements in Ukraine, Konev was promoted by Stalin to Marshal of the Soviet Union in February 1944. He was one of Stalin's favourite generals and one of the few senior commanders whom even Stalin admired for his ruthlessness.[citation needed]

During 1944 Konev's armies advanced from Ukraine and Belarus into Poland and later into Czechoslovakia. By July he had advanced to the Vistula River in central Poland, and was awarded the title of Hero of the Soviet Union. In September 1944 his forces, now designated the Fourth Ukrainian Front, advanced into Slovakia and helped the Slovak partisans in their rebellion against German occupation.

In January 1945 Konev, together with Georgy Zhukov, commanded the Soviet armies which launched the massive winter offensive in western Poland, driving the German forces from the Vistula to the Oder River. In southern Poland his armies seized Kraków. Soviet historians, and generally Russian sources, claimed that Konev preserved Kraków from Nazi-planned destruction by ordering a lightning attack on the city.[6] Konev's January 1945 offensive also prevented planned destruction of the Silesian industry by the retreating Germans.

In April his troops, together with the 1st Belorussian Front under his competitor, Marshal Zhukov, forced the line of the Oder and advanced towards Berlin. Konev's forces entered the city, but Stalin gave Zhukov the honour of capturing Berlin and hoisting the Soviet flag over Reichstag. Konev was ordered to the south-west, where his forces linked up with elements of the United States Army at Torgau and also retook Prague shortly after the official surrender of the German forces.

After the war Konev was appointed head of the Soviet occupation forces in Eastern Germany and also Allied High Commissioner for Austria. In 1946 he became commander of Soviet ground forces and First Deputy Minister of Defense of the Soviet Union, replacing Zhukov. He held these posts until 1950, when he was appointed commander of the Carpathian Military District. This was clearly a demotion, and was in line with Stalin's policy of relegating popular wartime commanders to obscure posts so they would not become threats to his position.[citation needed]

After Stalin's death, however, Konev returned to prominence. He became a key ally of the new Party leader, Nikita Khrushchev, being entrusted with the trial of the Stalinist police chief, Lavrenty Beria in 1953. He was again appointed First Deputy Minister of Defense and commander of Soviet ground forces, posts he held until 1956, when he was named Commander-in-Chief of the Armed Forces of the Warsaw Pact. Shortly after his appointment he led the suppression of the Hungarian Revolution.

He held this post until 1960, when he retired from active service. In 1961–62, however, he was recalled and was again commander of the Soviet forces in East Germany. He was then appointed to the largely ceremonial post of Inspector-General of the Defense Ministry.

Konev remained one of the Soviet Union's most admired military figures until his death in 1973. He married twice, and his daughter Nataliya is Dean of the Department of Linguistics and Literature at the Russian Military University.

In 1969, the Ministry of Defense of the USSR published Konev's 285-page war memoir called Forty-Five. It was later translated into English in the same year and published by Progress Publishers, Moscow. This work discusses Konev's taking of Berlin, Prague, his work with Marshal Georgi Zhukov, Stalin, his field meeting with General Omar Bradley and Jascha Heifetz. In English, the book was titled I. Konev — Year of Victory. It was also published in Spanish and French under the titles El Año 45 and L'an 45 respectively.

In 1991 his memorial sculpture in Kraków was dismantled. The sculpture was given to the Russian town of Kirovsk.[7] The memorial plaque in front of the apartment building where he lived (three blocks from the Kremlin) is still mounted on the brick wall.