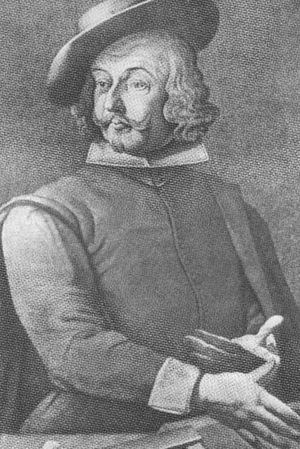 Jakob (or Jacob in English) Hutter (also Huter or Hueter) (ca 1500 – 25 February 1536), was a Tyrolean Anabaptist leader and founder of the Hutterites.

He first encountered Anabaptists in Klagenfurt and soon thereafter was converted to their belief. He began preaching in the Tyrol region, forming several small congregations. In early 1529, authorities in the Tyrol began to persecute Anabaptists there. Hutter and a few others went to investigate Moravia, because they heard the persecution was not as severe there. They found the situation was indeed more tolerant and the Tyrolean Anabaptists decided to emigrate. As small groups moved to Moravia, Hutter remained in the Tyrol to pastor to those who remained.

Hutter escaped capture by the authorities because other captured Anabaptists would not reveal his whereabouts, even under severe torture. In 1527, Ferdinand I, Archduke of Austria declared that seductive doctrines and heretical sects "will not be tolerated."

Hutter went to Moravia in 1533, when the persecution of the Anabaptists in the Tyrol was at its peak. Many Anabaptists from the Pfalz, Schwaben and Silesia also came to Moravia. Hutter united the local Anabaptist congregations, enabling Anabaptism in Moravia to flourish. Under Hutter's leadership, several of the congregations adopted the early Christian practice of communal ownership of goods, in addition to their Anabaptist beliefs of nonviolence, and adult baptism.

In 1535 the Moravian government expelled all Anabaptists from Moravia and they scattered to surrounding countries. Hutter returned to the Tyrol where he was arrested on 30 November 1535 in Klausen and brought to the fortress Castle Bronzolo. On 9 December, Hutter was moved to Innsbruck, where he was interrogated and pressured to recant. Even under severe torture he would not recant or reveal the names of other Anabaptists. Hutter was sentenced to death by fire and died on 25 February 1536 at the stake in Innsbruck in front of the Golden Roof. According to the Hutterian Chronicle, a total of 360 Anabaptists were executed in the Tyrol. 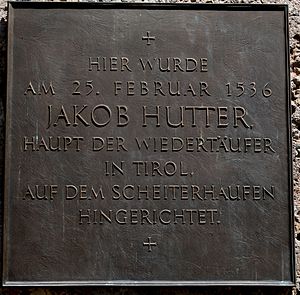 Plaque at the Golden Roof: "Jakob Hutter, leader of the anabaptists of Tyrol, was executed here on the stake February 25th, 1536"

In Innsbruck Hutter is remembered in a street name, Hutterweg and by a plaque at the Golden Roof. Since 1992, Austrian Service Abroad, which works for worldwide understanding and reconciliation, has been located on Hutterweg.

In 2006–2007 a working group with representatives from Protestant and Catholic churches, the peace movement Pax Christi and the Association of Evangelical churches in Tyrol worked toward reconciliation with the Hutterites. On 25 February 2007 the group, along with three couples invited to represent the Hutterites, held a memorial ceremony at the Golden Roof and a joint prayer service in the old city hall in Innsbruck.[1]