Dahlgren devised a smoothbore howitzer, adaptable for many sizes of craft as well as shore installations. He then introduced a cast-iron muzzle-loading cannon with vastly increased range and accuracy, known as the Dahlgren gun, that became the Navy's standard armament.

In the Civil War, Dahlgren was made Commander of the Washington Navy Yard, where he established the Bureau of Ordnance. In 1863, he took command of the South Atlantic Blockading Squadron at the rank of Rear Admiral, and helped William Tecumseh Sherman secure Savannah, Georgia.

Dahlgren was born on November 13, 1809, in Philadelphia, Pennsylvania, the son of Bernhard Ulrik Dahlgren, a merchant and Swedish Consul in the city.

Dahlgren joined the United States Navy in 1826 as a midshipman and was promoted to the coastal survey in 1834. By 1847, he was an ordnance officer, and at the Washington Navy Yard began to improve and systematize the procurement and supply system for weapons.

He was assigned to the Washington Navy Yard in 1847. While there, Dahlgren established the U.S. Navy's Ordnance Department; became an ordnance expert; developed a percussion lock; and wrote a number of books, including The System of Boat Armaments in the United States Navy, Shells and Shell Guns, and Naval Percussion Locks and Primers. Under his command, the Navy established its own foundry to manufacture new equipment, and its first product was the boat howitzer, designed for use aboard ship and in landings.

His most famous contribution was the Dahlgren gun, a cast-iron muzzle loading cannon.

His "shell gun" design was an improvement on the shell-gun invented by the French Admiral Henri-Joseph Paixhans. Dahlgren wrote:

"Paixhans had so far satisfied naval men of the power of shell guns as to obtain their admission on shipboard; but by unduly developing the explosive element, he had sacrificed accuracy and range.... The difference between the system of Paixhans and my own was simply that Paixhans guns were strictly shell guns, and were not designed for shot, nor for great penetration or accuracy at long ranges. They were, therefore, auxiliary to, or associates of, the shot-guns. This made a mixed armament, was objectionable as such, and never was adopted to any extent in France... My idea was, to have a gun that should generally throw shells far and accurately, with the capacity to fire solid shot when needed. Also to compose the whole battery entirely of such guns."

The United States Navy had equipped several ships with 8-inch Paixhans guns of 63 and 55 cwt. in 1845, and later a 10-inch shell gun of 86 cwt. In 1854, the six Merrimack-class warships were equipped with 9-inch Dahlgren shell guns. By 1856, the Dahlgren gun had become the standard armament of the United States Navy.

The boat howitzer derived from a requirement realized during the Mexican–American War. During that war, naval landing parties were armed with a variety of army ordnance, often too heavy and cumbersome for use with the landing boats. Dahlgren first experimented with standard army-issue 12-pounder mountain howitzers before devising his own system of guns. The boat howitzers came in four basic types: small, light (or medium), and heavy versions of the 12-pounder and a larger 24-pounder. All conformed to the same basic shape, straight gun tubes with no adorning bands or clefts. Elevation was made via a screw threaded into the knob at the breech. Instead of by traditional trunnions, the guns were attached to the carriage by a loop under the barrel. The Dahlgren system also included mounting carriages that facilitated various employments of the guns. A single-axle metal carriage was designed for shore use. A bed-type carriage was used on small boats, with a rail system to allow the gun to be trained fore, aft and broadside of the boat. A similar mount was offered for shipboard use. The system of boat howitzers was used by the Navy well into the 1890s, with some examples used in ceremonial purposes into the 20th Century. 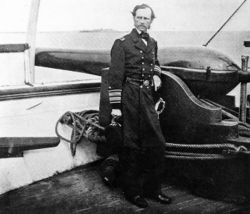 Rear Admiral Dahlgren, on board the USS Pawnee, beside a 50-pounder Dahlgren rifle (one of his bottle-shaped cast-iron cannons), c. 1864.

However, fatefully, one of the "dahlgrens" exploded on being tested in 1860, causing Navy regulations to require the use of much lower levels of powder until 1864, well into the Civil War. The commander of USS Monitor felt that had his gunner packed the cannons with a full charge, he might have been able to destroy CSS Virginia.

In 1861, Dahlgren's superior at the Washington Navy Yard resigned to join the Confederate navy, and President Abraham Lincoln wanted to name then-Commander Dahlgren to the post of Commander of the Washington Navy Yard. By law, however, that position could only be held by an officer with a rank of Captain or above. Lincoln successfully persuaded Congress to pass a special act legalizing Dahlgren's appointment to the yard, and, in July 1862, Dahlgren was promoted to the rank of captain and made chief of the Bureau of Ordnance. Then in February 1863 Dahlgren was promoted to Rear Admiral[1] and took command of the South Atlantic Blockading Squadron. In 1864, he helped William Tecumseh Sherman secure Savannah, Georgia.

Dahlgren's eldest son Charles Bunker Dahlgren (1839-1912), who had studied steam engineering, joined the U.S. Navy at the start of the Civil War and served with distinction, receiving several promotions and ending as the rank of Captain, though he declined offers to continue in federal service after the war. Among other incidents, Charles Dahlgren commanded the siege battery of IX inch Dahlgren shell-guns which destroyed the powerful Confederate batteries at the Battle of Vicksburg, and served under his father during the blockade of Charleston.

Another of Dahlgren's sons, Colonel Ulric Dahlgren, was killed on March 2, 1864 in a cavalry raid on Richmond, Virginia, while carrying out an alleged assassination plot against Jefferson Davis and the Confederate Cabinet. The plot became known as the Dahlgren Affair. The admiral was deeply troubled by Ulric's death and role in this event, as well as reports of the disrespectful treatment of the corpse before Richmond spy master Elizabeth Van Lew secured its proper burial.

His brother William also spied on Confederate purchasing agents in England during the war.[2] However, despite Radical Republican associations, John Dahlgren's younger brother Charles G. Dahlgren (1811–1888), a banker and slave owner, became a Confederate Brigadier General, Commander of the 3rd Brigade, Army of Mississippi, which he personally recruited and funded, until his troops' integration into the regular Confederate army and removal by Jefferson Davis in 1862.

Dahlgren, took command of the South Pacific Squadron from Rear Admiral George F. Pearson, in 1867. When he was relieved of the command of the Squadron in 1869, he returned to the Washington Navy Yard where he served until his death in 1870.

The Naval station in Dahlgren, Virginia, Dahlgren Hall at the United States Naval Academy in Annapolis, Maryland, and several ships were named for him, as was Dahlgren, Illinois, and Dahlgren Township, Minnesota.

Admiral Dahlgren had three sons from his first marriage to Mary Bunker (1839). Admiral Dahlgren's eldest son, Charles Bunker Dahlgren, was an engineer and captain in the Union Navy.[3] After his father's death, he would write and present many technical papers on military weaponry, including the Dahlgren gun. Ulric Dahlgren (1842-1864) was a soldier in the Union Army and was killed in an unsuccessful mission to liberate Federal prisoners in Libby Prison and Belle Isle. Another son, Paul Dahlgren, also in the army, died in 1876 while serving as consul general in Rome.

In 1865, Dahlgren married his second wife, Sarah Madeleine Vinton, daughter of Congressman Samuel Finley Vinton and Romaine Madeleine Bureau, and the widow of Daniel Convers Goddard, first Assistant Secretary of the newly created U.S. Department of the Interior. Madeleine was a well-known author in her own right. Their children were John Vinton Dahlgren, who married Elizabeth Wharton Drexel; Eric Bernard Dahlgren, Sr., who married Lucy Wharton Drexel;[4] and Ulrica Dahlgren, who married Josiah Pierce, and was the grandmother of Romaine Dahlgren Pierce, wife of David Mountbatten, 3rd Marquess of Milford Haven.