Drinkwater was born in Leytonstone, London, and worked as an insurance clerk. In the period immediately before the First World War he was one of the group of poets associated with the Gloucestershire village of Dymock, along with Rupert Brooke and others.

In 1918 he had his first major success with his play Abraham Lincoln. He followed it with others in a similar vein, including Mary Stuart and Oliver Cromwell. In 1924, his Lincoln play was adapted for a two-reel short film made by Lee DeForest and J. Searle Dawley featuring Frank McGlynn Sr. as Lincoln, and made in DeForest's Phonofilm sound-on-film process.[1]

He had published poetry since The Death of Leander in 1906; the first volume of his Collected Poems was published in 1923. He also compiled anthologies and wrote literary criticism (e.g. Swinburne: an estimate (1913)), and later became manager of Birmingham Repertory Theatre.

He was married to Daisy Kennedy, the ex-wife of Benno Moiseiwitsch.

Papers relating to John Drinkwater and collected by his stepdaughter are held at the University of Birmingham Special Collections. 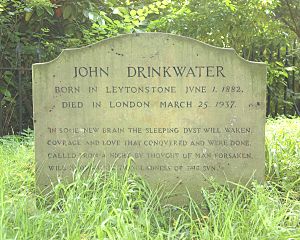 Drinkwater died in London in 1937. He is buried at Piddington, Oxfordshire, where he had spent summer holidays as a child.

A road in Leytonstone, formerly a 1960s council estate, is named after Drinkwater, as is a small development of modern houses in Piddington.