Sir John Murray of Broughton, 7th Baronet Stanhope (c. 1718 – December 6, 1777) was a Jacobite, who served as secretary to Prince Charles Edward Stuart ('Bonnie Prince Charlie') during the Jacobite Rising of 1745. He later earned the hatred of the Jacobites by turning King's evidence.

John Murray was born in Broughton in the Scottish Borders[1] the son of Sir David Murray of Broughton, and Margaret Scott - a family long associated with the Stuart cause. In 1732 he was enrolled in the University of Edinburgh, then in 1735 he travelled to the Dutch University of Leyden. From there he went to the Stuart court-in-exile in Rome, where he became a confidant of Prince Charles. In 1738, he returned to Edinburgh and reacquired the ancestral estate of Broughton (which had been sold to pay family fines for their involvement with the Royalist cause during the Cromwellian period). He married Margaret Ferguson, who became a Jacobite heroine in her own right,[2] by whom he had five children.

Around 1739 he became the conduit between the exiled Prince Charles in Rome and the Jacobites in Scotland. He traveled to Paris in March 1743 on behalf of a number of Highland Jacobites to sound out French support for the Stuart cause - and appears to have been duped by false French assurances, whilst at the same time presenting an exaggerated picture to the French of the support in Scotland.[3] He was in Peeblesshire in August 1745, when Prince Charles arrived in Moidart and raised the Jacobite standard. His first response was to attempt to dissuade Charles from staying, but was subsequently persuaded of his duty to support the Prince.[4] On 25 August he was appointed secretary to Charles, and apparently from that point insisted on being addressed as 'Mr. Secretary Murray'. One of his roles as Secretary was to collect, extort and borrow money for the Prince. But he was also involved in the military endeavor. He was present at the Battle of Prestonpans and, when the Jacobite forces invaded England, he was sent by the Prince to negotiate the surrender of Carlisle.[5] However, he was later among those who fatefully persuaded Charles to halt his march south at Derby, and return to Scotland.[6]

During March 1746, when things had started going awry for the Jacobites, Murray apparently fell ill, and later went into hiding to avoid arrest[7] causing some to accuse him of desertion. On the day of the Battle of Culloden he had to be carried across Loch Ness to Glenmoriston, from where he learned of the disastrous Jacobite defeat. Shortly afterwards, Murray went to meet French ships which were belatedly bringing money to the Jacobites, and he took possession of the gold that became known as the Loch Arkaig treasure. Murray then traveled back to Peeblesshire, apparently with a view to escaping to Holland. However, on June 27, at the home of his sister, Veronica Murray Hunter of Polmood, he was captured. 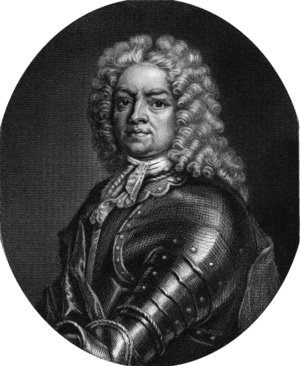 Charles attempted to secure Murray a commission in the Army of France. This would have ensured that he would have been treated as a prisoner of war, rather than a rebel. However, on July 7, before this could be arranged, Murray was dispatched to the Tower of London. Here, charged with high treason, Murray turned King's evidence and informed on his Jacobite colleagues. His testimony was critical in the 1747 trial and execution of Simon Fraser, Lord Lovat, chief of the Clan Fraser.

Murray was given a full pardon by the British Crown in June 1748 and, perhaps unsurprisingly given his notoriety in Scotland, chose to remain in England. He was held in disdain by his Jacobite compatriots, referred to scathingly as "Mr. Evidence Murray". In 1753 the town of Paisley raised an action against him for £500, a sum they had paid under duress to the Jacobites in 1745. However, he successfully resisted this in terms of his pardon and the Act of Indemnity 1747.[8] Curiously, years later in 1763, Prince Charles paid a covert visit to Murray who, despite his betrayal, remained a convinced Jacobite.

However, Murray's infamy can perhaps be illustrated by the story of his business dealing with his solicitor (who happened to be Sir Walter Scott's father). According to Walter Scott, Murray would enter the house of an evening and be quickly hurried into the study, his identity concealed from the rest of the household. After a number of these meeting, Mrs Scott's curiosity got the better of her, and so she took tea to her husband and the mysterious guest. Murray accepted the offer, but her husband declined. When Murray left, Scott threw the cup out of the window, exclaiming

"I can forgive your little curiosity, madam, but you must pay the penalty. I may admit into my house, on a piece of business, persons wholly unworthy to be treated as guests by my wife. Neither lip of me nor of mine comes after Mr. Murray of Broughton's."[9]

In 1764, Murray's Broughton estates were sold (as were those other Jacobite sympathisers) by order of the Court of Session. In 1775 Broughton House burned to the ground. (Today Broughton Place, with the Broughton gallery, stands in its place.[10]) Sir John Murray died at Cheshunt, Hertfordshire on 6 December 1777 and is buried at the St Marylebone Cemetery in East Finchley, north west London.