The Khyber Pass (Pashto: د خیبر درہ‎[pronunciation?], Urdu: در خیبر‎[pronunciation?]) (elevation: 1,070 m or 3,510 ft) is a mountain pass connecting Afghanistan and Pakistan, cutting through the northeastern part of the Spin Ghar mountains. An integral part of the ancient Silk Road, it is one of the oldest known passes in the world. Throughout history it has been an important trade route between Central Asia and South Asia and a strategic military location. The summit of the pass is 5 kilometres (3.1 mi) inside Pakistan at Landi Kotal. The Khyber Pass is part of the Asian Highway 1 (AH1). 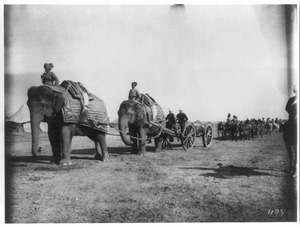 Elephant battery of heavy artillery along the Khyber Pass at Campbellpur, 1895 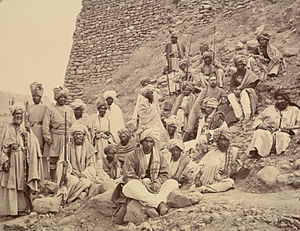 Afghan chiefs and a British political officer posed at Jamrud fort at the mouth of the Khyber Pass in 1878.

To the north of the Khyber Pass lies the country of the Mullagori tribe. To the south is Afridi Tirah, while the inhabitants of villages in the Pass itself are Afridi clansmen. Throughout the centuries the Pashtun clans, particularly the Afridis and the Afghan Shinwaris, have regarded the Pass as their own preserve and have levied a toll on travellers for safe conduct. Since this has long been their main source of income, resistance to challenges to the Shinwaris' authority has often been fierce.

For strategic reasons, after the First World War the British built a heavily engineered railway through the Pass. The Khyber Pass Railway from Jamrud, near Peshawar, to the Afghan border near Landi Kotal was opened in 1925.

During World War II concrete "dragon’s teeth" (tank obstacles) were erected on the valley floor due to British fears of a German tank invasion of India.[3]

The Pass became widely known to thousands of Westerners and Japanese who traveled it in the days of the Hippie trail, taking a bus or car from Kabul to the Afghan border. At the Pakistani frontier post, travelers were advised not to wander away from the road, as the location was a barely controlled Federally Administered Tribal Area. Then, after customs formalities, a quick daylight drive through the Pass was made. Monuments left by British Army units, as well as hillside forts, could be viewed from the highway.

The area of the Khyber Pass has been connected with a counterfeit arms industry, making various types of weapons known to gun collectors as Khyber Pass Copies, using local steel and blacksmiths' forges.[citation needed]

During the current war in Afghanistan, the Khyber Pass has been a major route for resupplying military armament and food to the NATO forces in the Afghan theater of conflict since the US started the invasion of Afghanistan in 2001. Almost 80 percent of the NATO and US supplies that are brought in by road were transported through this Khyber Pass. Furthermore, it has also been used to transport civilians from the Afghan side to the Pakistani one. Until the end of 2007, this route had been relatively safe since the tribes living there (mainly Afridi, a Pashtun tribe) were paid by the Pakistani government to keep the area safe. However, since that year, the Taliban began to control the region, and so there started to exist wider tensions in their political relationship.

Since the end of 2008, supply convoys and depots in this western part increasingly came under attack by elements from or supposedly sympathetic to the Pakistani Taliban.

In January 2009, Pakistan sealed off the bridge as part of a military offensive against Taliban guerrillas. This military operation was mainly focused on Jamrud, a district on the Khyber road. The target was to “dynamite or bulldoze homes belonging to men suspected of harboring or supporting Taliban militants or carrying out other illegal activities”.[4] The result meant that more than 70 people were arrested and 45 homes were destroyed. In addition, two children and one woman were killed. As a response, in early February 2009, Taliban insurgents cut off the Khyber Pass temporarily by blowing up a key bridge.

This increasingly unstable situation in northwest Pakistan, made the US and NATO broaden supply routes, through Central Asia (Turkmenistan, Uzbekistan and Tajikistan). Even the option of supplying material through the Iranian far southeastern port of Chabahar was considered.[5]

In 2010, the already complicated relationship with Pakistan (always accused by the US of hosting the Taliban in this border area without reporting it) became tougher after the NATO forces, under the pretext of mitigating the Taliban's power over this area, executed an attack with drones over the Durand line, passing the frontier of Afghanistan and killing three Pakistani soldiers. Pakistan answered by closing the pass on 30 September which caused a convoy of several NATO trucks to queue at the closed border.[6] This convoy was attacked by extremists apparently linked to Al Qaida which caused the destruction of more than 29 oil tankers and trucks and the killing of several soldiers.[7] NATO chief members had to issue a formal apology to the Pakistan government so the supply traffic at this pass could be restored.

In August 2011, the activity at the Khyber pass was again halted[8] by the Khyber Agency administration due to the more possible attacks of the insurgency over the NATO forces, which had suffered a period of big number of assaults over the trucks heading to supply the NATO and ISAF coalitions all over the frontier line. This instability made the Pakistan Oil Tanker Owners Association demand more protection from the Pakistani and US government threatening not to supply fuel for the Afghan side.

A number of locations, around the world, have been named after the Khyber Pass:

A spa hotel in Gulmarg Jammu and Kashmir is named Khyber Himalayan Resort and Spa.