La belle Hélène (French pronunciation: ​[la bɛl elɛn], The Beautiful Helen), is an opéra bouffe in three acts by Jacques Offenbach to an original French libretto by Henri Meilhac and Ludovic Halévy. The operetta parodies the story of Helen's elopement with Paris, which set off the Trojan War.

It was first performed at Paris's Théâtre des Variétés on December 17, 1864, starring Hortense Schneider and José Dupuis. While some experts (cf Grove) are of the opinion that the creation of La belle Hélène was a "largely untroubled" affair, others (cf Jacob) paint a different picture: Although Offenbach had managed at great cost to persuade Schneider, known by then as "La Snédèr", to accept the role of Helen, the premiere remained in doubt to the very last minute. During rehearsals, La Snédèr constantly complained that the extravagant Léa Silly (in a male role as Oreste) was trying to upstage her: La Silly extemporized (a privilege reserved for the prima donna); she imitated her; she danced a cancan in her back while she was singing an important aria, etc. etc. La Snédèr not only walked off the set repeatedly, but kept threatening to leave the world, or at least Paris, altogether! It took all of Offenbach's skills at creating harmony to see the production through. 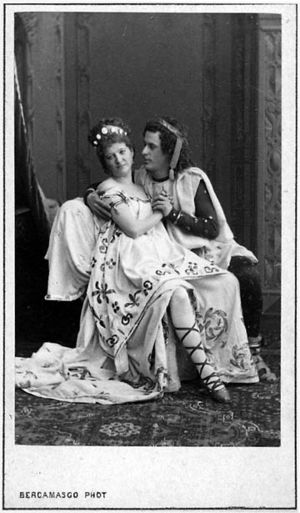 Paris and Helen from a production of La belle Hélène at the Mikhaylovsky Theatre.

Place: Sparta and the shores of the sea
Time: Before the Trojan War.

Paris, son of Priam, arrives with a missive from the goddess Venus to the high priest Calchas, commanding him to procure for Paris the love of Helen, promised him by Venus when he awarded the prize of beauty to her and refused it to Juno and Minerva.

Paris disguises himself as a shepherd and wins three prizes at a contest of outrageously silly wordgames with the Greek kings under the direction of the 'barbu, bu, bu' (bearded and drunk) Agamemnon as schoolmaster, whereupon he reveals his identity. All the world knows that he has awarded the apple to Venus, and Helen realizes that it is 'la fatalité' (fatality) that has sent her 'l'homme à la pomme' (the man with the apple). The Trojan prince is crowned victor by Helen, to the disgust of the lout Achilles and the two bumbling Ajaxes. Paris is invited to a banquet by Menelaus, 'l'époux de la reine, poux de la reine, poux de la reine' (Helen's spouse and louse). Paris has bribed Calchas to have Philocomus strike the thunder gong and to prophesy that Menelaus must at once proceed to Crete, at which point the chorus breaks into a joyful song, repeating over and over again 'Va, suis, Ménélas / La voix du destin / Qui te mène, hélas! / Au pays crétain!' ('Go, go, go to Crete!'), which ends the act.

After parodies on the life of the Greek court, in which the honest Calchas appears as a gambling cheat, Paris comes to Helen at night. Although she knows her fate, she seemingly resists him, and he uses strategy. He departs, but returns when she has fallen asleep. He tells Helen that what will now occur is only a dream, and she is content to risk all with this understanding at this moment. Menelaus unexpectedly returns and finds the two in each other's arms. Helen, exclaiming 'la fatalité, la fatalité', tells him that it is all his fault: A good husband knows when to come and when to stay away. Paris tries to dissuade him from kicking up a row, but to no avail. When all the kings join the party, berating him and telling him to go back where he came from, Paris departs, vowing to return and finish the job.

The kings and their entourage have moved to Nauplia for the summer season. A high priest of Venus arrives on a boat, explaining that he has to take Helen to Cythera where she is to sacrifice 100 heifers for her offenses. Menelaus pleads with her to go with the priest, but she refuses, saying that it is he, and not she, who has offended the goddess. But when she realizes that the priest is Paris in disguise, she goes on board with him, and they sail away together.