Known most popularly in the modern era and to scholarship by its traditional Greek name "Leontopolis" Λεόντων πόλις[1] (literally, "city of lions"), or Leonto Λεοντώ, ("lion"),[2] the demographic makeup of the city varied culturally and linguistically over its long history, and the Greek name was progressively used more and more over the native Egyptian Taremu ("Land of Fish").[3] After the annexation of Ptolemaic Egypt as a Roman province, the city retained the Greek name, and was referred to in Latin sources as the oppidum Leontos,[4] though the Egyptian name still lingered among primary speakers of Coptic Egyptian into the post-classical period. Today, the site itself is referred to in Arabic as Tell el-Muqdam ("mound of the city"). 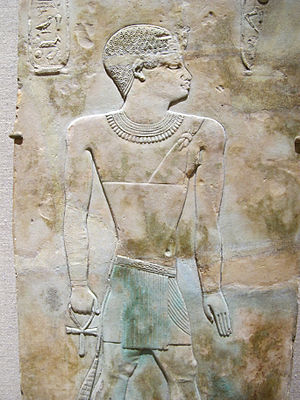 The city is located in the central part of the Nile Delta region. It was the capital of the 11th nome of Lower Egypt (the Leontopolite nome) and was probably the centre of pharaonic power under the 23rd dynasty. In his conquest-stela found at the fourth Nile Cataract at Jebel Barkal, Piye writes about his conquest over Iuput II. who ruled over Leontopolis.[5] Strabo is the earliest writer who mentions either the nome, or its chief town: and it was probably of comparatively recent origin or importance.

The Greek name of this city means, "City of Lions", given on account of the presence of temples to the lioness goddesses Bast and Sekhmet, and their son, Maahes, the lion prince. Live lions were kept at the temples during the time of the Greek occupation.

Here in the reign of Ptolemy VI Philometor, the Jewish high priest Onias built a temple to Yahweh, afterwards closed by Vespasian.[6]

It became the capital of the Roman province of Augustamnica Secunda and Metropolitan archbishopric, known as Leontopolis in Augustamnica.

Antiquarians were long divided as to the real site of the ruins of Leontopolis. According to D'Anville, they were covered by a mound called Tel-Essabè (Tel es-sab`), or the Lion's Hill.[7] Jomard, on the other hand, maintains that some tumuli near the village of El-Mengaleh in the Delta, represent the ancient Leontopolis., And this supposition agrees better with the account of the town given by Xenophon of Ephesus.[8] Smith sites the city at latitude 30° 6′North, which is considerably further south than the actual site.

Most scholars today[citation needed] agree that Leontopolis is located at Tell al Muqdam, at latitude 30° 45′North.