From Infogalactic: the planetary knowledge core
(Redirected from Letter of Credence)
Jump to: navigation, search 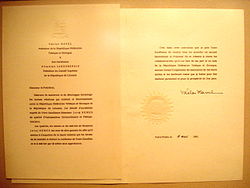 Letter of credence for the Czechoslovak Ambassador to Lithuania, signed by President Václav Havel. 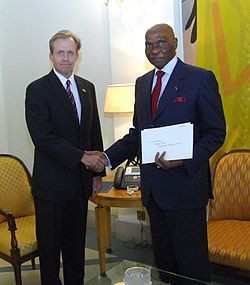 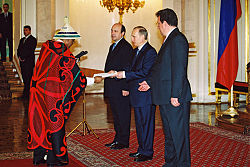 Tekiso Hati, Ambassador of the Kingdom of Lesotho, presenting his credentials to Russian President Vladimir Putin. 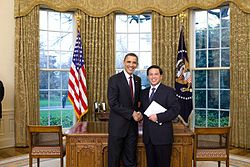 US President Barack Obama welcomes Ambassador Zhang Yesui of the People’s Republic of China to the White House on March 29, 2010, during the credentials ceremony for newly appointed ambassadors to Washington, D.C.

A letter of credence is a formal letter, usually sent by one head of state to another, that formally grants diplomatic accreditation to a named individual to be the sending country's ambassador in the receiving country. A letter of recall is the opposite, recalling an ambassador, either as a means of diplomatic protest (see letter of protest) or because the diplomat is being replaced by another envoy. Diplomatic letters are generally written in French (the lingua franca of diplomacy), unless the countries share the same official language.

Letters of credence are presented personally to the receiving head of state by ambassador-designates in a formal ceremony. Letters serve as the most traditional and universal forms of Diplomatic credentials.[1] Until their credentials are accepted, an ambassador-designate does not formally assume diplomatic status, including the possession of diplomatic immunity. In practice, however, they are almost invariably accepted, as both states will have informally discussed the issue in advance and sorted out any problems.

In parliamentary democracies, heads of state or their representatives accept or reject diplomatic credentials on the basis of advice (binding instructions to the head of state) from the government. Often, a minister in the government or in cabinet will attend (be present with) the head of state at the actual ceremony, to symbolize the fact that the acceptance of the credentials is on the basis of government advice.

Disputes regarding mode of address

Another dispute revolved around the name of the Irish state. Between 29 December 1937 and 2 December 1999, the Irish constitution laid claim to the territory of the entire island of Ireland, and gave the Irish state the name of Ireland. The United Kingdom claimed Northern Ireland for itself, and thus adopted a policy of referring to the rest of Ireland as the "Republic of Ireland" or "Eire", which did not imply Irish sovereignty over the whole island. Consequently, on the advice of Her Majesty's Government, Queen Elizabeth II for a time addressed letters of credence to the President of Ireland by name (e.g., "President McAleese"). This compromise was agreed to by the governments of both states. However, as part of the Belfast Agreement, Ireland dropped its claim to Northern Ireland and the United Kingdom now addresses its letters of credence to the President of Ireland.

Traditionally monarchs, particularly European ones, address each other in formal communications in the singular e.g. ‘I being desirous’ but address Presidents and other Heads of State in the majestic plural e.g. ‘We being desirous’. They also close formal letters with ‘Your good brother/sister’ for sovereigns, but with ‘Your good friend’ for other leaders.

Given that a head of state sends a letter of credence to a fellow head of state, the converse is true also. The person who sends a letter of credence is by implication a head of state (unless they are acting as the representative or designate of a head of state; for example, a governor-general). This became a source of dispute in independent Ireland from December 1936 to 1949, when Ireland had both a President and a King. Under the External Relations Act, the role of representing Ireland in the accreditation of ambassadors belonged to the King of Ireland on the advice of the Irish government, and thus the Irish head of state was unambiguously recognized by other states to be the King of Ireland. After April 1949, when that role was given by law to the President of Ireland, the President became Irish head of state.

In 2005, Canada changed its Letter of Credence and Letter of Recall by removing all references to Elizabeth II as Queen of Canada, Canada's head of state, instead having them run in the name of the Governor General,[citation needed] who is the Queen's representative. Australia and New Zealand have since followed suit, in consultation with Elizabeth II's Private Secretary. There is currently[needs update] a movement to reverse these decisions by the Monarchist League of Canada.