From Infogalactic: the planetary knowledge core
Jump to: navigation, search
This article is about the Irish language name of both the island and the state called "Ireland" in English. For the Irish State, see Republic of Ireland. For the part of the United Kingdom, see Northern Ireland. For the physical island, see Ireland.
For other uses of "Ireland", see Ireland (disambiguation). 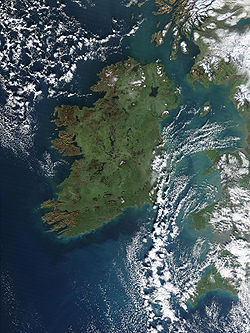 True-colour satellite image of Ireland, known in Irish as Éire.

listen)) is Irish for "Ireland", the name of an island and a sovereign state.

The modern Irish Éire evolved from the Old Irish word Ériu, which was the name of a Gaelic goddess. Ériu is generally believed to have been the matron goddess of Ireland, a goddess of sovereignty, or simply a goddess of the land. The origin of Ériu has been traced to the Proto-Celtic reconstruction *Φīwerjon- (nominative singular Φīwerjū < Pre-Proto-Celtic -jō).[1] This suggests a descent from the Proto-Indo-European reconstruction *piHwerjon-, likely related to the adjectival stem *piHwer- (cf. Sanskrit pīvan, pīvarī and pīvara meaning "fat, full, abounding"). This would suggest a meaning of "abundant land".

This Proto-Celtic form became Īweriū or Īveriū in Proto-Goidelic.[2] It is highly likely that explorers borrowed and modified this term. During his exploration of northwest Europe (circa 320 BC), Pytheas of Massilia called the island Ierne (written Ἰέρνη). In his book Geographia (circa 150 AD), Claudius Ptolemaeus called the island Iouernia (written Ἰουερνία). Based on these historical accounts, the Roman Empire called the island Hibernia.

Thus, the evolution of the word would follow as such:

A 19th century proposal, which does not follow modern standards of etymology, derives the name from Scottish Gaelic:

This is similar in meaning to the Norse name for Irish people, "west men", which subsequently gave its name to the Icelandic island of Vestmannaeyjar.

Difference between Éire and Erin

While Éire is simply the name for the island of Ireland in the Irish language, and sometimes used in English, Erin is a common poetic name for Ireland, as in Erin go bragh. The distinction between the two is one of the difference between cases of nouns in Irish. Éire is the nominative case, the case that (in the modern Gaelic languages) is used for nouns that are the subject of a sentence, i.e., the noun that is doing something as well as the direct object of a sentence. Erin derives from Éirinn, the Irish dative case of Éire, which has replaced the nominative case in Déise Irish and some non-standard sub-dialects elsewhere, in Scottish Gaelic (where the usual word for Ireland is Èirinn) and Manx (a form of Gaelic), where the word is spelled "Nerin," with the initial n- probably representing a fossilisation of the preposition in/an "in" (cf. Irish in Éirinn, Scottish an Èirinn/ann an Èirinn "in Ireland"). The genitive case, Éireann, is used in the Gaelic forms of the titles of companies and institutions in Ireland e.g. Iarnród Éireann (Irish Rail), Dáil Éireann (Irish Parliament) or Poblacht na hÉireann (The Republic of Ireland).

As a state name

135px
147px
Ireland uses Éire as the country name on both its postage stamps and coinage.
Main article: Names of the Irish state

Article 4 of the Irish constitution adopted in 1937 by the government under Éamon de Valera states that Éire is the name of the state, or in the English language, Ireland.[4] The Constitution's English-language preamble also described the population as "We, the people of Éire". Despite the fact that Article 8 designated Irish as the "national" and "first official" language, Éire has to some extent passed out of everyday conversation and literature, and the state is referred to as Ireland or its equivalent in all other languages. The name "Éire" has been used on Irish postage stamps since 1922;[5] on all Irish coinage (including Irish euro coins); and together with "Ireland" on passports and other official state documents issued since 1937. "Éire" is used on the Seal of the President of Ireland.

The United Kingdom insisted on using only the name "Eire" and refused to accept the name "Ireland". It adopted the Eire (Confirmation of Agreements) Act 1938 putting in law that position. At the 1948 Summer Olympics the organisers insisted that the Irish team march under the banner "Eire" notwithstanding that every other team was marching according to what their name was in English.[6] The UK Government used what some Irish politicians stated were "sneering titles such as Eirish".[7] The UK Government would refer to "Eire Ministers" and the "Eireann Army" and generally avoid all reference to "Ireland" in connection with the state.

Before the 1937 Constitution, "Saorstát Éireann" (the Irish name of the Irish Free State) was generally used.[8]

During the Emergency (as World War II was known), Irish ships had "EIRE" (and the Irish tricolour) painted large on their sides and deck, to identify them as neutrals. 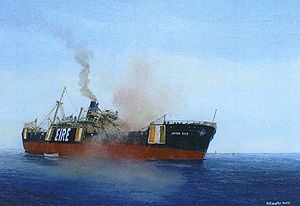 Under the 1947 Convention Irish-registered aircraft have carried a registration mark starting "EI" for Éire.

Spelling Eire rather than Éire

When Irish-language texts were printed in Gaelic type, diacritics were retained on upper-case letters as for lower-case letters. From the later 1940s, in conjunction with other reforms, printing switched to the same "Roman type" used for most other Latin alphabet languages. There was some uncertainty about whether the síneadh fada (acute accent) should be written on upper-case letters. While it was preserved in all-Irish texts, it was often omitted when short fragments of Irish appeared alone or in English texts. Noel Davern asked in the Dáil in 1974 why Irish stamps had EIRE rather than ÉIRE. The reply from the Minister for Posts and Telegraphs was:[13]

The accent has been omitted on most Irish stamps issued over the past ten years in the interests of artistic balance and in accordance with a common practice in the printing of Irish in Roman script for display purposes. This is a prevailing typographical convention and is common to several European languages, including French.

The spelling Eire is generally deplored by Irish-speakers as worse than a misspelling, because eire is a separate word, meaning "a burden, load or encumbrance".[13][14] The minister in 1974 stated, "The word on the stamp ... does not mean 'eire' and it is not understood to mean 'eire' by anybody except Davern."[13] Stamps later reverted to a Gaelic type with the accent preserved.

In 1938 the British government provided in the Eire (Confirmation of Agreements) Act 1938 that British legislation could henceforth refer to the Irish Free State as "Eire" (but not as "Ireland"). The 1938 Act was repealed in 1981, and in 1996 a British journalist described Eire as "now an oddity rarely used, an out-of-date reference".[15]

Founded in 1937, the Eire Society of Boston is an influential Irish-American group.[16]

Éire has also been incorporated into the names of Irish commercial and social entities, such as Eir (formerly Eircom and Telecom Éireann) and its former mobile phone network, Eircell.[17] In 2006 the Irish electricity network was devolved to EirGrid. The company "BetEire Flow" (eFlow), named as a pun on "better", is a French consortium running the electronic tolling system at the West-Link bridge west of Dublin.[18] According to the Dublin Companies Registration Office in 2008, over 500 company names incorporate the word Éire in some form.[19]

Sometimes the incorporation is used for humorous or ironic effect, such as the sub reddit for Irish software developers named "DevelEire",[20] or Cormac Ó Gráda's "Éirvana" paper in 2007 on the Celtic Tiger economy.[21]