The Loaísa expedition was a 16th-century voyage of discovery to the Pacific Ocean, commanded by Garcia Jofre de Loaísa (1490 – 20 July 1526) and ordered by King Charles I of Spain to colonize the Spice Islands in the East Indies. After an uneventful start the expedition was scattered by bad weather near Cape Horn, leading to the ultimate loss of six of its seven ships. The remaining vessel reached its destination, but the survivors were too few to establish an effective colony and ultimately chose to return to Spain.

De Loaísa's expedition was conceived both as a rescue mission and a voyage of discovery. The Victoria, a vessel from Magellan's expedition to the Pacific, had returned to Spain with word that her sister ship the Trinidad had last been seen attempting to return home by sailing east from the Spice Islands to South America. De Loaísa was ordered to seek Trinidad, or news of her fate, by voyaging along her expected return route to Spain.[1] Failing this he was to locate and colonise Magellan's Spice Islands, and also to bring back news of the semi-mythical land of Ophir which Spanish scholars believed may be somewhere near China.[1] For this purpose, de Loaísa was assigned seven vessels and total of 450 men including tradesmen and administrators for the Spice Islands settlement.[2] 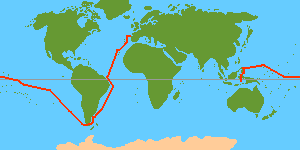 The expedition set sail from Corunna on July 24, 1525. It consisted of six galleons, Santa María de la Victoria, Sancti Spiritus, Anunciada, San Gabriel, Santa María del Parral and San Lesmes and a patache, Santiago. De Loaísa was named captain along with Juan Sebastián Elcano, who had reached the Spice Islands in 1521 during the Magellan expedition.

The fleet headed southwest to the Canary Islands and then south along the African coastline.[3] In November 1525 de Loaísa moved west across the Atlantic to Brazil, reaching the Patagonian shore in January 1526.[3] There was no sign of Trinidad, and de Loaísa decided to abandon the search for her and continue instead to the Spice Islands. However the weather was poor, and over the next several weeks, in high winds while trying to enter the Strait of Magellan, the ships alternately gathered and dispersed. Two ships, Sancti Spiritus and Anunciada were wrecked, and one, San Gabriel tacked into the Atlantic and deserted the expedition.

The San Lesmes under the captaincy of Francisco de Hoces was driven south along the coast, possibly to a latitude of 57°, where the crew noted "an end of land" which may have been the first European sighting of Cape Horn.[4] After some difficulty Hoces was able to steer his galleon northward once more, rejoining the other three vessels that remained with the expedition. On 26 May 1526, this diminished fleet of four ships, three galleons and the patache, passed through the Strait and entered the Pacific.[4]

The bad weather which had originally scattered de Loaísa 's fleet continued in the Pacific. The four remaining vessels quickly lost sight of each other in the heavy rain and were unable to regroup when the storm finally passed on 1 June.

The Santiago sailed for north, and in a 10,000-kilometre voyage, reached the Pacific coast of Mexico in July 1526, achieving the first navigation from Europe to the western coast of North America.

San Lesmes disappeared entirely. Twentieth century speculation suggests she may have run aground in the Marquesas Islands, either on the island of Anaa where a 1774 expedition found a cross erected on the beach, or off the Amanu atoll where an old Spanish cannon was later found.[4] The fate of the San Lesmes is explored in Greg Scowen's conspiracy thriller The Spanish Helmet which is based on Robert Langdon's theory that the lost vessel made its way to, and discovered, New Zealand.

The third ship, Santa María del Parral, sailed the Pacific to Sangir off the northern coast of Sulawesi, where the ship was beached and its crew were variously killed or enslaved by the natives. Four survivors were rescued in 1528 by another Spanish expedition coming from Mexico.

The last galleon, Santa Maria de la Victoria, was the only ship to reach the Spice Islands, landing in September 1526.[4]

Loaísa himself died of scurvy on July 30, 1526, Elcano a few days later, and Alonso de Salazar three weeks after that. Yñigez reached the islands of Visayas and Mindanao in the Philippines and the Moluccas, but died of food poisoning. Only Andrés de Urdaneta and 24 other men survived to land in the Spice Islands. They returned to Spain in 1536 in the Portuguese India Armada and under Portuguese guard.