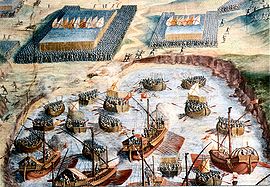 Spanish ships landing in the Battle of Ponta Delgada (Battle of Terceira Island) naval battle of 26 July 1582, between a Spanish fleet of 26 ships which included several pataches (tenders), commanded by Don Álvaro de Bazán, and a French fleet of 60, led by Admiral Philippe Strozzi, ending with a decisive victory for the Spanish 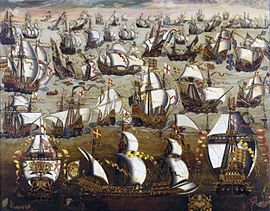 English Painting of the attempted invasion of England, in the Anglo-Spanish war of the late 16th century.

A patache is a type of sailing vessel with two masts, very light and shallow, a sort of cross between a brig and a schooner, which originally was a warship, being intended for surveillance and inspection of the coasts and ports.[1] It was used as a tender to the fleet of vessels of more importance or size, and also for trans-Pacific travel, but later began to be used for trading voyages, carrying cargo burdens of 30 tons or more.

Pataches were used by the Spanish Armada in the 15th–18th centuries mainly for the protection and monitoring of the overseas territories of the Spanish Empire. Because of their lightness and speed of movement privateers favored them in attacking commercial vessels.[2] Fleets of pataches participated in several historical battles: