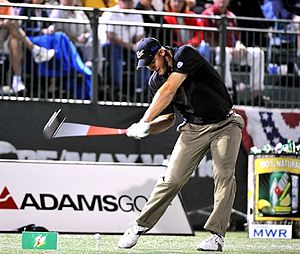 Long drive is a competitive sport where success is derived by hitting a golf ball the farthest by driving. A small but dedicated talent base of golfers populate the world of Long-Drive, with the top talent competing professionally in various events and exhibitions.

Professional long drivers can average over 350 yards (320 m) in competition,[1] compared with 300 yard (274 m) averages from the top PGA Tour drivers[2] and 200 yards (183 m) for an average amateur[citation needed]. Some shots in competitions surpass 400 yards (366 m).[3] The world record recognized by Guinness Records as the longest drive in a competition is 515 yards (471 m) by 64-year-old Mike Austin in 1974 at the US Senior National Open Qualifier with a 43.5" steel shafted persimmon wood driver.[4] The record distance achieved in The RE/MAX European Long Drive Championship is 473 yards (433m) by Allen Doyle in September 2005.[5] The record distance achieved in The RE/MAX South African Long Drive Championship is 506 yards (462.9m) by Nico Grobbelaar in September 2012. Fast swingers can swing their club heads at over 150 mph (245 km/h), well beyond the 85 mph (140 km/h) average for an amateur. They train for strength, flexibility, and speed and often perform corporate exhibitions for money, exhibiting a variety of trick shots. Ball speeds are nearly double that of an average golfer (220 mph).

There are several well-known names in long drive. Jason Zuback is perhaps the most famous, being one of three people to win multiple RE/MAX World Long Drive Championships, with four consecutive wins from 1996–99 and a win in 2006. Sean "The Beast" Fister is another, winning in 1995, 2001, and 2005. Jamie Sadlowski had back to back wins in 2008–09. Art Sellinger, a two-time national champion, is currently the owner of the Long Drivers of America organization.

Long drive clubs, which are always drivers, are different in many ways from consumer clubs. Until the recent club length limitation rules, the shafts were much longer than a normal 45 in (114.3 cm) shaft, sometimes exceeding 55 in (139.7 cm). In 2005, 50 in (127.0 cm) limitation was introduced (measured vertically).

Long drive shafts differ from standard shafts. The main difference is stiffness, as a shaft not stiff enough will lag in an inconsistent manner, causing a loss of control. Long drive shafts are much stiffer in flex and almost always made of graphite, which is lighter than steel. In order to be stiff, a shaft is usually heavier and stronger. The kick point or bend point is also higher for a lower trajectory relative to the swing, and the shaft has a lower torque, meaning that it will not twist as much, allowing the clubhead to stay straighter.

Clubheads usually approach the 460 cubic centimeter limit, rarely below 400 cc. They must stay within the Coefficient Of Restitution (COR) limit of 0.83, which measures how a ball hits off the surface. Most clubheads only approach the COR in the center of the club, so technology has allowed more area of the club to possess a COR of above 0.80. Thus, mishits are less affected by the newer clubheads. The loft of a long drive club is also much lower than a consumer club, sometimes around 4 or 5 degrees, as opposed to 10.5 degrees for an amateur's driver. The reason for lower lofted driver heads is to greatly reduce back spin. Too much back spin causes the ball to balloon or climb, creating a steep landing angle which does not allow the ball roll out. A flatter landing angle is desired to get the most out of the ball's forward velocity and energy.

In all Long Drivers of America (LDA) sanctioned competitions, competitors must hit the same type of ball. In 2013, TopFlight is the official ball of the RE/MAX World Long Drive Championships, LDA professional competitions, and local and regional qualifiers.The specific design characteristics of this ball include a dimple design that helps to maintain lower spin rates and a ball compression of 110. The average ball compression in golf varies from the mid 70's to the upper 80's.