The Manganiar and related Langha are Muslim communities in the desert of Rajasthan, India in the districts of Barmer and Jaisalmer, along the border in Sindh province of Pakistan. Significant numbers are also found in the districts of Tharparkar and Sanghar in the province of Sindh in Pakistan. They are famous for their classical folk music. They are the groups of hereditary professional musicians, whose music has been supported by wealthy landlords and aristocrats for generations.

The Manganiars consider themselves descendants of the Rajputs and are renowned as highly skilled folk musicians of the Thar desert. Their songs are passed on from generation to generation as a form of oral history of the desert. They sing songs about Alexander the Great, about the local Maharajas and past battles in the region. Manganiars have survived for centuries on the patronage of wealthy merchants in caravan towns, particularly Jaisalmer where there is an important settled community today. The traditional jajman (patrons) of the Manganiar are the locally dominant Rajput community, while the Langha have a similar relationship with the Sindhi-Sipahi, a community of Muslim Rajputs. At times of birth, marriage or any family festivity for their Rajput patrons, the Manganiar musicians are in attendance to evoke the right mood with songs of the desert and many specially composed songs to praise the patron and his family.

Though Manganiar and Langhas communities are Muslim, many Manganiar songs are in praise of Hindu deities and celebrate Hindu festivals such as Diwali and Holi. The Manganiar performers traditionally invoke the Hindu God Krishna and seek his blessing before beginning their recital.

Kamaicha
The 17-string khamaycha is a bowed instrument. Made of mango wood, its rounded resonator is covered with goat skin. Three of its strings are goat intestine while the other 14 strings are steel. 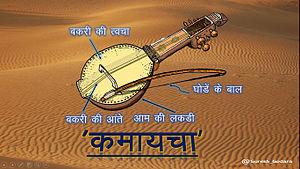 Khartaal
The khartaal is a kind of castanet made of teak. Its name is derived from "Khar", meaning hand, and "Taal", meaning rhythm.

Dholak
The dholak is a classical North Indian, Pakistani and Nepalese hand drum similar in timbre to a bongo. A dholak may have traditional lacing or turnbuckle tuning. The dholak has a simple membrane and a handle on the right hand side. The left hand membrane has a special coating on the inner surface. This coating is a mixture of tar, clay and sand (dholak masala) which lowers the pitch.