From Infogalactic: the planetary knowledge core
Jump to: navigation, search
For the Campos Sales meteorite of 1991, see Meteorite falls.

Dr. Manuel Ferraz de Campos Sales (Portuguese pronunciation: [manuˈew feˈʁas di ˈkɐpus ˈsalis]; 15 February 1841 – 28 June 1913) was a Brazilian lawyer, coffee farmer and politician. He was born in the city of Campinas, São Paulo. He graduated as a lawyer from the Faculdade de Direito do Largo de São Francisco, São Paulo, in 1863. He served as a provincial deputy three times, general-deputy once, and also as minister of justice (1889-1891), senator and governor of São Paulo (1896–1897). The pinnacle of his political career was his election as president of Brazil, an office he held between 1898 and 1902. Austere financial reforms were adopted during his tenure. 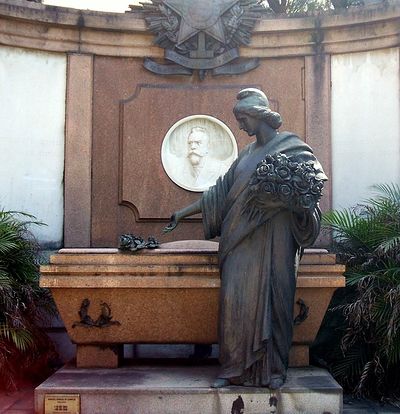 Tomb of Campos Sales in the Consolação Cemetery, São Paulo.