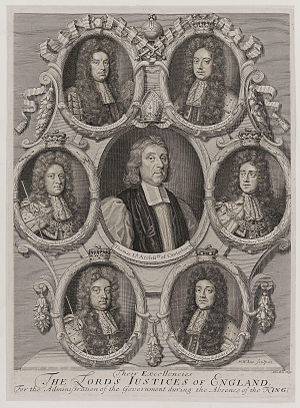 Their Excellencies the Lord Justices of England, for the administration of the Government during the absence of the King by Robert White

Excellency is an honorific style given to certain members of an organisation or state. Once entitled to the title "Excellency", the holder usually retains the right to that courtesy throughout his or her lifetime, although in some cases the title is attached to a particular office, and is held only for the duration of that office.[1]

It is sometimes misinterpreted as a title of office in itself, but in fact is an honorific that precedes various titles (such as Mr. President, and so on), both in speech and in writing. In reference to such an official, it takes the form His/Her Excellency; in direct address, Your Excellency, or, less formally, simply Excellency.

The abbreviation HE is often used instead of His/Her Excellency; alternatively it may stand for His Eminence.

Heads of state and government

In most republican nations, the head of state is formally addressed as His Excellency.[2]

If a republic has a separate head of government, that official is often addressed as Excellency as well. If the nation is a monarchy, however, the customs may vary. In the case of Australia, all ambassadors, high commissioners, governors and the governor-general and their spouses are entitled to the use of Excellency.

Governors of colonies in the British Empire were entitled to be addressed as Excellency and this remains the position for the governors of what are now known as British Overseas Territories.[3]

In various international organizations, notably the UN and its agencies, Excellency is used as a generic form of address for all heads of state and heads of government. It is often granted to the organization's head as well, and to those chiefs of UN diplomatic missions, such as Resident Coordinators (who are the designated representatives of the Secretary-General), who are accredited at the Head of State (like an Ambassador), or the lower Head of Government level.

In recent years, some international organizations, such as the Organization for Security and Co-operation in Europe, or the European Union, have designated their Permanent Representatives in third countries as Ambassadors, although they do not represent sovereign entities. This is now largely accepted, and because these Ambassadors rank after the UN representative in the orders of precedence of representatives of international organizations, the UN coming naturally first as pre-eminent, the UN Resident Coordinators are now also commonly but informally referred to in diplomatic circles as ambassadors, although the UN itself does not refer to them in this way.

Judges of the International Court of Justice are also called Your Excellency.

In some monarchies the husbands, wives, or children, of a royal prince or princess, who do not possess a princely title themselves, may be entitled to the style. For example, in Spain, spouses or children of an infante or infanta (by birth) are addressed as Excellency.

Also, former members of a royal house or family, who did have a royal title but lost this one, may be awarded the style afterwards. Examples are former husbands or wives of a royal prince or princess, like Alexandra, Countess of Frederiksborg, a former member of the Danish Royal Family who divorced from Prince Joachim of Denmark. Likewise, Count Carl Johan Bernadotte of Wisborg, who lost his succession rights to the Swedish throne and renounced his titles in 1946 when he married the commoner Elin Kerstin Margaretha Wijkmark, was entitled to the style.

In some emirates (e.g., Kuwait or Qatar), only the (former) Emir, the Heir Apparent and Prime Minister are called His Highness. Their children are styled with the lower ranking His Excellency or Her Excellency (unless they possess a higher title).

In Spain and some other countries, members of the nobility are addressed as His/Her Excellency, and high ranking noblemen and noblewomen (of Peerage rank in British terms) with the minimum rank of Duke, or with the dignity Grandee, are addressed as The Most Excellent Lord/Lady.

In Denmark some counts exceptionally have the right to be styled as Your Excellency, e.g., the counts Danneskiold-Samsøe (hereditary) and some of the counts of Rosenborg and the countess of Frederiksborg (ad personam).

Excellency can also attach to a prestigious quality, notably in an order of knighthood. For example, in the Empire of Brazil, it was attached to the highest classes, each time called Grand Cross, of all three imperial orders: Imperial Order of Pedro I, Imperial Order of the Southern Cross (in this case, also enjoying the military honours of a Lieutenant general) and Order of the Rose.

By a decree of the Sacred Congregation of Ceremonial of 31 December 1930[5] the Holy See granted bishops of the Roman Catholic Church the title of Most Reverend Excellency (Latin, Excellentia Reverendissima). In the years following the First World War, the ambassadorial title of Excellency, previously given to nuncios, had already begun to be used by other Catholic bishops. The adjective Most Reverend was intended to distinguish the religious title from that of Excellency given to civil officials.

The instruction Ut sive sollicite of the Holy See's Secretariat of State, dated 28 March 1969, made the addition of Most Reverend optional.[6]

Cardinals, even those who were bishops, continued to use the title of Eminence.

In some English-speaking countries, the honorific of Excellency does not apply to bishops other than the nuncio. In English law, Anglican archbishops are granted the title of Grace (Your Grace, His Grace, as for a duke), and bishops are granted the title of Lordship. The same titles are extended by courtesy to their Catholic counterparts, and continue in use in most countries that are or have been members of the Commonwealth. An exception is former British East Africa (Kenya, Uganda, Tanzania).

In 1991, the Brazilian Presidential Office issued a composition manual to establish the appropriate usage of the Portuguese language for all government agencies. The manual states that the title of Excelência (Excellency) is the proper form used to address the President and Vice President, all members of Parliament and judges, among other officials.[7]

Within the Commonwealth of Nations, the following officials usually use the style His or Her Excellency:

However newer protocol rules approved will discontinue "colonial era" styles of His (or Her) Excellency. The same release states that the in Hindi (which is the other language in which official communications are released in the Central Government of India in its capacity of Rājabhāśhā: Officiating language) the style Rāshtrapati Mahoday (राष्ट्रपति‍ महोदय, Sir/Honourable President) shall replace the erstwhile Mahāmahim(महामहि‍म). The newer style will be Honourable.

The corresponding changes in releases from the President's Secretariat shall be from Mahāmahim to Rāshtrapatiji.[9] The release also talks about the styles of other dignitaries, like Governors. "Hon'ble" will be used before the titles "President" and "Governor", while the traditional honorifics Shri or Smt. (Shrimati) should precede the name.

The President of Kenya is addressed as "His/Her Excellency".

The Prime Minister of Pakistan and The President of Pakistan, are both addressed as "their Excellency(s)".

While all other government officials are styled "The Honorable", both titles are translated as Ang Kagalang-galang in Filipino.

In the Portuguese Republic, the proper style of the President is His Excellency (Portuguese: Sua Excelência).

The President of Somalia is addressed as "His/Her Excellency".

The President of Sri Lanka is addressed as His/Her Excellency. Alternatively, one may address the president simply as Mr. President.

During most of the 20th century in Sweden, only three persons were entitled to the style of Excellency: the Prime Minister, the Minister for Foreign Affairs and the Marshal of the Realm (the highest ranking courtier).[10][11]

During the 1970s it fell out of custom in Sweden to address the Prime Minister and the Minister of Foreign Affairs as such, although they continue to be addressed as such in United Nations protocol and in other diplomatic writing.[12] Today, only the Marshal of the Realm is regularly addressed as Excellency within Sweden.

Further back in history, a Lord of the Realm (Swedish: En af Rikets Herrar) and a Riksråd were also addressed as Excellency.

In the United States, the form Excellency was commonly used for George Washington during his service as commander-in-chief of the Continental Army and later during his presidency, but it began to fall out of use with his successor, and today has been replaced in direct address with the simple Mr. President or The Honorable. However, in many foreign countries and in United Nations protocol the President of the United States is usually referred to as His Excellency. Diplomatic correspondence to President Abraham Lincoln during the American Civil War, as during the Trent Affair, for instance, frequently referred to him as His Excellency.

In several of the former Thirteen Colonies, the form Excellency is used for the governor. These include Connecticut, Georgia, Massachusetts, New Hampshire, New York, North Carolina, Pennsylvania, Rhode Island, South Carolina and Virginia. West Virginia likewise adopted the title His/Her Excellency from its parent state. The term is used frequently in Georgia on the state governor's letterhead, the text of executive orders, any document that requires the governor's signature, and in formal settings. Excellency is used frequently when introducing the Governor of Pennsylvania, the Governor of Virginia, and the Governor of North Carolina at formal events. The Governor of Michigan is traditionally afforded the courtesy title, though it has fallen out of use in recent years.[13]

Other governors are sometimes addressed as Excellency at public events. This is a traditional practice that is not at all incorrect, but it is less common, and is the product of custom and courtesy rather than of legislation.

Though ambassadors are traditionally accorded the title elsewhere, the U.S. government does not use Excellency for its chiefs of missions, preferring Honorable instead.