The Marquee Club was a music venue first located at 165 Oxford Street, London, England when it opened in 1958 with a range of jazz and skiffle acts. Its most famous period was from 1964 to 1988 at 90 Wardour Street in Soho, and it finally closed when at 105 Charing Cross Road in 1996, though the name has been revived unsuccessfully three times in the 21st century. It was always a small and relatively cheap club, located in the heart of the music industry in London's West End, and used to launch the careers of generations of rock acts.

It was a key venue for early performances by bands who were to achieve worldwide fame in the 1960s and remained a venue for young bands in the following decades. It was the location of the first ever live performance by The Rolling Stones on 12 July 1962.[1][2]

The club was established by Harold Pendleton, an accountant whose love of jazz had led him to become secretary of the National Jazz Federation. Originally it was located in the Marquee Ballroom in the basement of the Academy Cinema in Oxford Street, where dances had been held since the early 1950s. Its decor was designed by Angus McBean with a striped canopy to imitate a marquee. Pendleton took over management of the ballroom, and the first Jazz at the Marquee night was held on 19 April 1958. Johnny Dankworth, Chris Barber, Alexis Korner and Cyril Davies were early resident performers, and Tubby Hayes and Joe Harriott were also regular performers. In 1962 the club began a regular R&B night that occasionally featured visiting American musicians such as Muddy Waters. Pendleton also launched the National Jazz Festival in 1961 in Richmond; this was the precursor to the Reading and Leeds Festivals.[3] By 1963, the club had become most noted for its R&B acts, including Davies, Brian Auger and Manfred Mann – who played there a record 102 times between 1962 and 1976 – but Pendleton was forced to find a new venue when his lease expired.[4] 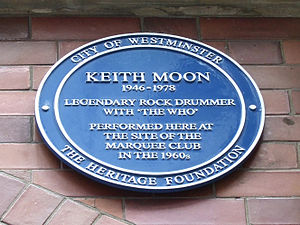 In March 1964 the club moved a short distance to what became its most famous venue at 90 Wardour Street. Here, almost every major rock band of note played over the next 25 years on the tiny stage. Residencies during the late 1960s alone included Alexis Korner, Cyril Davies, Chris Barber, The Rolling Stones, The Yardbirds, Led Zeppelin, The Who, King Crimson, Yes, Jethro Tull, The Jimi Hendrix Experience and Pink Floyd (who played on Sunday afternoons as part of the Spontaneous Underground club).[5] Another band that made regular appearances was The Manish Boys featuring David Bowie, who first played there in November 1964; and Peter Green's Fleetwood Mac gave their first performance there in 1967.[4] To find out who was playing on any given night, you could just call in at the 'Ship' pub a few doors away.[6]

In 1964, Moody Blues manager/producer Alex Murray used a homemade studio in the garage at the back of the club to produce the classic "Go Now" single which shot to No. 1 at Christmas 1964 and film the first ever UK pop video promo. The development of Marquee Studios was largely financed by profits from this record.[citation needed] The studio was later used by Elton John, The Groundhogs, The Clash and others.[4]

The Rolling Stones, who first appeared at the club in January 1963,[4] returned there on 26 March 1971 after an eight-year hiatus to film a television special.[citation needed] Another TV special also filmed at the club, two years later in September 1973, was David Bowie's The 1980 Floor Show, screened as part of NBC's The Midnight Special.

The Faces performed there on 7 December 1970.

The 1970s: Status Quo and the new Punk order

In 1972, it hosted one of the most famous rock performances within the UK, when Status Quo took to the stage, with a blistering set, including Paper Plane, which the video for it was filmed during this gig. Although never a seminal punk venue, the Marquee nevertheless embraced the burgeoning punk rock movement of the late 1970s and regularly promoted punk and new wave nights into the 1980s. Bands such as The Boys, Eddie and the Hot Rods, The Stranglers, Generation X, London, The Police, XTC, Skrewdriver, The Sinceros, Buzzcocks, the early Adam & the Ants, The Jam, Joy Division, The Sound and The Cure all trod the famous Wardour Street stage. Mainstream rock acts like Dire Straits (in the first tour, 5 and 6 July 1978[7]), Alexis Korner, Steve Hillage, Rory Gallagher. Racing Cars, The Enid, Hanoi Rocks, The Tyla Gang and Karakorum featuring Martin Chambers later with The Pretenders also appeared regularly at the venue.

During the early to mid-1980s the Marquee became an important venue to the New Wave of British Heavy Metal (NWOBHM). Def Leppard played their first show on the Pyromania World Tour here, and included a different setlist from the rest of the shows on that tour. There was a glam revival spearheaded by Hanoi Rocks, The Babysitters and the Quireboys and others. NWOBHM bands such as Angel Witch, Diamond Head, Witchfynde and Praying Mantis were regulars and Iron Maiden were filmed playing there for LWT documentary 20th Century Box (introduced by a very young Danny Baker).

In April 1985, Robin Trower recorded the majority of his live album Beyond the Mist at The Marquee Club. This album also includes two new studio tracks and an extended 10-minute version of "Bridge of Sighs".

The Marquee was the central venue of the progressive rock revival of the early 1980s. It was here that the then unsigned Marillion began to gain a wider fan base and press interest playing frequent two night residencies to a sold out crowd. Other neo-progressive rock acts of the time regularly headlining at the club included Twelfth Night, Solstice, and Pallas, often supported by acts such as Pendragon or IQ who would in later years become leading lights of the "neo-prog" scene. Other progressive bands regularly playing the Marquee at this time included Quasar, Mach One, Haze, Cardiacs and Liaison (who were not strictly prog but seemed to become linked to the movement).

During this period The Club held heats and the final of Melody Makers "band contests". New wave and indie bands appeared including "Two Pints of Lager and a Packet of Crisps Please" one-hit wonders Splodgenessabounds, and the almost-cult band The Hummers.

The historical importance of the club led to a number of bigger, established artists playing "secret" gigs at the venue often as one-off 'fan thank yous', warm up shows or just because they liked the intimate atmosphere. These "secret" shows were often promoted under an assumed name designed to be recognised only by hardcore fans. These included appearances by The Jam (under the name John's Boys), Marillion (under such names as Skyline Drifters and Lufthanser Air Terminal), Prince, Genesis (under the name Garden Wall), Iron Maiden (appearing as guests on a bill headed "A Fun Night With The Entire Population of Hackney"), Squeeze & Mötley Crüe (in the Charing Cross Road venue as The Four Skins – seen in the video of their cover version of "Anarchy in the UK", and to the derision of those who arrived at the venue expecting the skinhead band of the same name). The less-famous Glasgow indie guitar band Del Amitri poked fun at this tradition in 1985 by playing a gig at the Marquee with "Special Guests" 'Bob Dylan and the Libyans', who were Del Amitri in costume. The venue also prominently featured in the video for the 1985 Wham! single "I'm Your Man" and the video for the 1987 Marillion single "Incommunicado" (which also features the lyric "I'm a Marquee veteran"). Metallica played a secret gig 1990 supporting Metal Church on their Blessing in Disguise Tour. They performed as Vertigo, and Mike Howe (Metal Church vocalist) introduced them as a new band that had only played a couple of shows.

Closure and subsequent re-use of the name

In 1988, Harold Pendleton sold the club to Billy Gaff, the manager of Rod Stewart.[4] The Wardour Street site was sold for redevelopment (it is now Meza and Floridita with a cigar retail shop Spanish restaurant and Cuban restaurant and some flats) and the Marquee Club was forced to move again, this time to a larger venue at the former Cambridge Circus Cinematograph Theatre, 105 Charing Cross Road.[8] During this period, American progressive metal band Dream Theater recorded their first live album, Live at the Marquee, at the venue on 23 April 1993. This site was also subsequently bought for redevelopment and the club closed in 1996. A Wetherspoons pub named "The Montagu Pyke" now occupies the building. 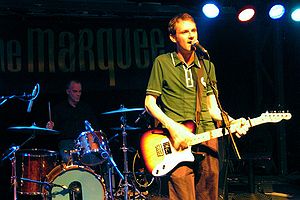 In 2001, the Marquee name was bought by entrepreneurs (including Dave Stewart of the Eurythmics who owned the brand rights) and affixed to a brand new club, located in a purpose-built space in Islington, now the Islington Academy. However, this hit financial difficulties and closed in 2003, less than a year after it had opened.

Under new owner Nathan Lowry, The Marquee reopened in 2004 in the heart of London's West End at 1 Leicester Square. The opening night was called the Breakthrough Weekender. The club successfully featured new and established bands during its time here, including Razorlight, The Feeling, and The Magic Numbers; but this venture also folded after less than 18 months.

In August 2007, another club using the name Marquee again opened, this time on Upper Saint Martin's Lane in Covent Garden. However, it too closed its doors for the last time on 10 February 2008, with Colchester-based rock act Torn Asunder being the last ever band to headline at The Marquee.