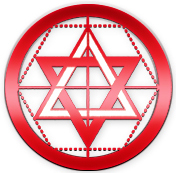 Martinism is a form of Christian mysticism and esoteric Christianity concerned with the fall of the first man, his state of material privation from his divine source, and the process of his return, called 'Reintegration' or illumination.

As a mystical tradition, it was first transmitted through a masonic high-degree system established around 1740 in France by Martinez de Pasqually, and later propagated in different forms by his two students Louis Claude de Saint-Martin and Jean-Baptiste Willermoz.

The term Martinism applies to both this particular doctrine and the teachings of the reorganized 'Martinist Order' founded in 1886 by Augustin Chaboseau and Gérard Encausse (aka Papus). It was not used at the tradition's inception in the 18th century. This confusing disambiguation has been a problem since the late 18th century, where the term Martinism was already used interchangeably between the teachings of Louis-Claude de Saint-Martin and Martinez de Pasqually, and the works of the first being attributed to the latter.[1]

The three branches of the tradition

Martinism can be divided into three forms through which it has been chronologically transmitted:

In the highest of the three degrees of the Order of the Elus-Cohen, known as the Shrine, itself consisting of three degrees of which the highest was the Master Reau-Crois, evocation of entities belonging to the Divine Plane was carried out. This makes clear that the Elus-Cohen were not merely a mystical but a magical order. The chief evocation was that of the 'Mender', Jehoshua, and the basic methods were those of the Key of Solomon, including the use of circles, names of angels, planetary hours and symbols. The magical operations of the lower degrees were intended to establish contact between the operator and the Invisible World. Lofty and beautiful prayers recalled the goal which the Order tried to attain. There were also exorcisms intended to strangle demonic influence in the universe and thwart its powers over men, and to combat black magic.[2]

This heritage was reorganized into the 'Ordre Martiniste' in 1886 by Augustin Chaboseau and Gerard Encausse (also known as Papus).[citation needed] 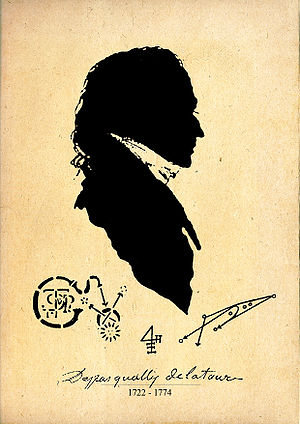 Jacques de Livron Joachim de la Tour de la Casa Martinez de Pasqually was born in c. 1727 in Grenoble, France, and died in 1774 in Saint-Domingue while dealing with profane business. Martinez de Pasqually was active in Masonic organisations throughout France from the age of 28 onwards. In 1765 he established l'Ordre des Chevaliers Maçons Élus Coëns de l'Univers (Order of Knight-Masons Elect Priests of the Universe), which functioned as a regular Masonic obedience in France.

This order had three sets of degrees: the first were analogous to the symbolic degrees of conventional Freemasonry. The second were generally Masonic, though hinting at Pasqually's own secret doctrine. The third set were blatantly magical: for example, by using exorcisms against evil in the world generally and in the individual specifically. In the highest degree, the Reaux-Croix, the initiate was taught to use Theurgy to contact spiritual realms beyond the physical.[3]

De Pasqually put forth the philosophy underlying the work of the Elus-Cohens in his only book, Treatise on the Reintegration of Beings,[4] which first uses the analogy of the Garden of Eden, and refers to Christ as "The Repairer". The ultimate aim of the Elus-Cohen was to attain – whilst living – the Beatific Vision through a series of magical invocations and complex theurgic operations.

After Martinez de Pasqually's death, the Elus-Cohens continued to operate for some time; however, divisions started to occur between various temples, which became dormant during the first half of the 19th century. The last-known surviving Elu-Cohen from the original incarnation of the order, Destigny, died in 1868.[4]

Saint-Martin became increasingly dissatisfied with the Elus-Cohens' use of theurgic ritual, feeling that it was too sophisticated for the desired end. Instead, he favoured inward contemplation, or what he called "The Way of the Heart". Nevertheless, Saint-Martin continued to acknowledge Martinez de Pasqually's influence on his own system of thought. In addition, Saint-Martin drew much inspiration from the work of Jakob Böhme.[5]

In 1777, after failing to convince the Elus-Cohens to adopt a more contemplative practice, he cut back his involvement in the Order. He ceased all involvement in 1790.

Saint-Martin outlined his philosophy in several books, using the nom de plume of "The Unknown Philosopher". These include:

There has been some controversy over whether Saint-Martin himself ever founded a formalised Order of Martinists. For example, 20th-century Martinist author Robert Ambelain initially claimed that Saint-Martin founded an order called the "Society of Initiates",[6] but within a few years he became disillusioned with the concept and stated that the Society of Initiates never existed.[7] Others allege that Saint-Martin became involved in a pre-existing society called the "Order of Unknown Philosophers".[8] It seems most probable, however, that although Saint-Martin did initiate disciples after a fashion, this was done on an informal basis; Martinism did not exist as an order per se until the efforts of Papus and Chaboseau (vide infra).

Willermoz and the Scottish Rectified Rite 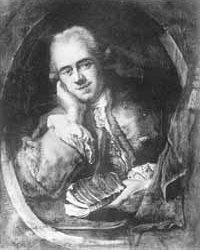 Jean-Baptiste Willermoz (born 1730, Lyon, France; died 1824 also at Lyon), was initiated into Masonry at the age of 20 in a lodge which operated under the auspices of the Strict Observance. He was initiated into the Elus-Cohen in 1767, eventually attaining the highest degree of the Order, and being named by de Pasqually as a "Superior Judge," one of its most senior officers.

Concerned about dissent in the order after the death of de Pasqually, Willermoz in 1778, together with two other Superior Judges, formulated the idea of creating two additional degrees for the Auvergne Province of the Strict Observance, which exemplified the philosophy, though not the theurgic practices, of the Elus-Cohens, while working in the Knight Templar-oriented milieu of the masonic rite. The name of the rite was changed to Chevaliers Beneficient de la Cité-Sainte (CBCS). The degree structure of the rite was thus:

Having reformed the French branch of the order, Willermoz in 1782 succeeded in persuading the German mother branch to adopt his reforms – though not without meeting considerable opposition from other branches of the Strict Observance, such as the Bavarian Illuminati of Adam Weishaupt.

The French Revolution curtailed the activities of the CBCS in France although the rite was preserved in Switzerland. Today the CBCS, or "Scottish Rectified Rite" (Rite Ecossais Rectifié) has several "great priories" throughout the world: Switzerland, USA., France, both the Waite's & Michael Herbert's Great Priories in England, Germany, Belgium, Spain, Portugal and Brazil, with prefectures and lodges of Saint Andrew as well as Rectified Craft lodges existing in many places from Italy to Brazil to Romania.[9] 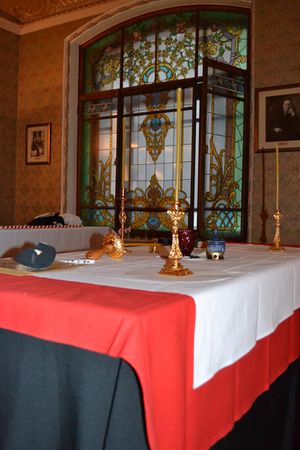 The disciples of Saint-Martin spread the Doctrine of the Unknown Philosopher in France, Germany, Denmark and above all in Russia. It was through one of them, Henri Delaage, that in 1880 a brilliant young Parisian doctor, Gerard Encausse (Later to be known as Papus), became acquainted with the doctrines of Saint-Martin. Subsequently, in 1884, together with some of his associates, he established a Mystical Order which he called the Ordre Martiniste or the Martinist Order.[10]

The founding of the Order came about when Encausse met Augustin Chaboseau in 1884. They discovered that they had both apparently received Martinist initiation through two different chains of succession which linked back to Saint-Martin and his original disciples. Papus claimed to have come into the possession of the original papers of de Pasqually and to have been given authority in the Rite of Saint-Martin by his friend Henri Viscount Delaage.[11] However, Encausse realised that there was a "missing link" in his own chain of succession: he and Chaboseau therefore "swapped initiations" to consolidate their lineages.

The Martinist Order which Papus founded was organised as a Lodge system, which worked four degrees:

Of these, the first two introduce the Candidate to key Martinist concepts, while the third supposedly confers the actual Initiation which Saint-Martin gave to his original disciples. Martinists generally believe that to be an authentic initiate, one must be able to show a chain of Initiatic Succession which goes back to Saint-Martin himself. However, Restivo states that "Martinist authenticity is not contingent upon acceptance or initiation into a filiation or succession of other Martinists as no personal initiation chain from Louis-Claude de Saint-Martin exists in the sacramental manner of ordination as culmination of mastery in an Initiatic order."

About the rituals themselves, the following general points may be made:

During the period up to the Second World War, the I::L:: or S::I::IV degree was exceptionally added as an endorsement or rank of distinction to the S::I::I:: degree for legates in new Martinist jurisdictions who were expected to eventually become Grand Masters. Later branches of the Martinist Order worked a fifth degree, I::L:: (Free Initiator/Initiateur Libre), which conferred on the candidate the power to initiate others into all four degrees in person, not requiring Lodge or Heptad group forms, and to establish a new and independent Martinist Order, as well as to act as the legate or representative or Grand Master of that new order. For example, the Rose+Croix Martinist Order (Ontario,Canada):[13] 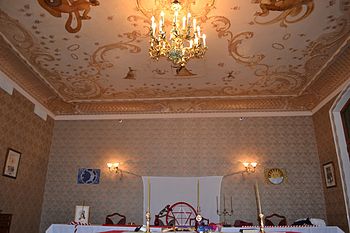 The interior of Lodges of Sovereign Autonomous Ancient Martinist-Martinezist Order <http://martinist.ru> during the regular ceremonial meeting at the Hotel Metropol, Moscow, Russia, in April 2013.

In 1905, Tsar Nicholas II of Russia invited Papus to Tsarskoïe Selo to ask for advice on domestic difficulties that he was facing with revolutionaries. The First World War was disastrous for the Order. Papus died on the battlefield fulfilling his duties as a doctor, as did many other leaders of the Order. After the war, the Order was almost extinct and the surviving members splintered into competing factions.

Many French Martinists supported Karl Wilhelm Naundorff's claims to the French throne. They joined the Synarchy movement and formed the Ordre Martiniste et Synarchie (OM&S). In 1931 Augustin Chaboseau joined Victor-Emile Michelet and Lucien Chamuel (the other two surviving members of the original Supreme Council of 1891) to resuscitate the Order that they had founded with Papus. To emphasise the difference between traditional Martinism and the many new groups that had emerged, they named their movement the Ordre Martiniste Traditionnel (OMT). Victor-Emile Michelet was elected Grand Master and Augustin Chaboseau succeeded him in 1939 until his death in 1946. Although he had received his Martinist initiations in the OMS, AMORC Imperator Ralph Maxwell Lewis was asked by the OMT in 1939 to bring Martinism to the U.S.A., and was granted the necessary charters and other documents.

The Second World War was as disastrous for the Order in Europe as the first. The Nazi regime suppressed all 'occult' groups and many Martinists died in concentration camps. The OMT in Europe and its American branch, the Traditional Martinist Order (TMO) still exist, but are reserved exclusively for members of AMORC. A change has been recently made by AMORC and individuals may join the Traditional Martinist Order without joining AMORC. Martinism is still growing in popularity, and with the advent of the Internet, many new orders have emerged worldwide.[14]

The Martinist Order (L'Ordre Martiniste) founded by Papus in 1887 continues, and grows worldwide with Groups across Europe, Africa, the United States and the Middle East.